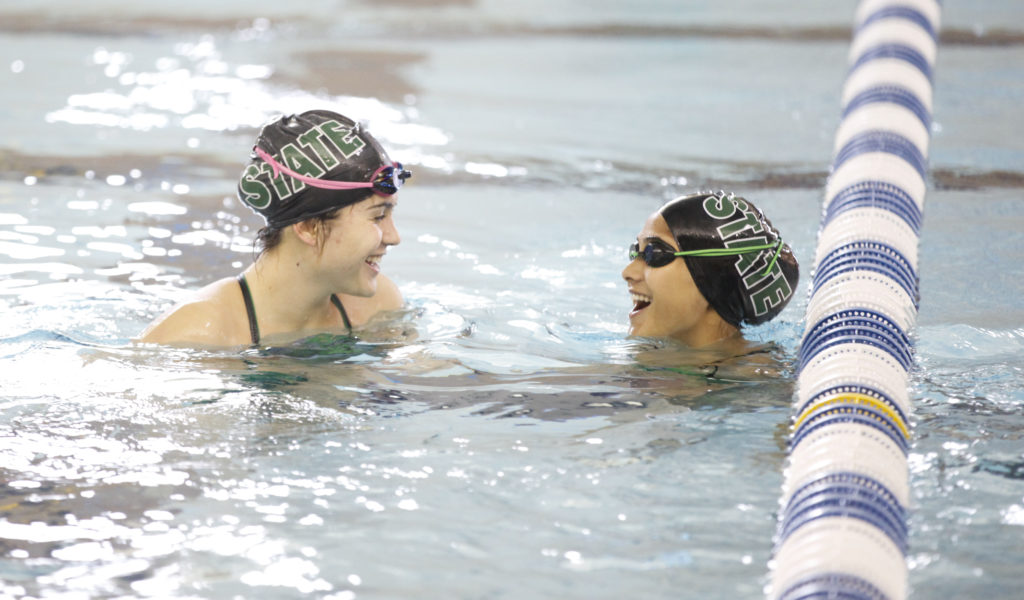 Sisters Lucy, left, senior, and Sydney Sirimongkhon-Dyck, sophomore, laugh in the pool during warmups and before the start of a quad on Friday, April 25, 2014 at Free State High. 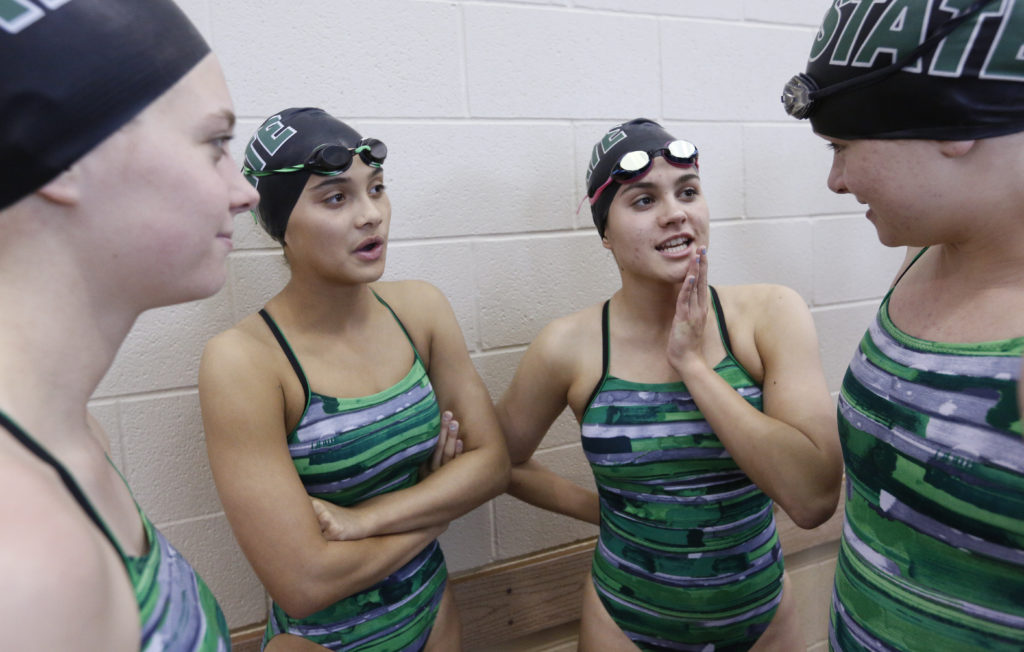 Sisters Sydney Sirimongkhon-Dyck, second from left, sophomore, and Lucy, senior, talk with teammates Alexa Malik, junior, left, and Cierra Campbell, sophomore, before their heat of the 200-yard medley relay during a quad on Friday, April 25, 2014 at Free State High School. 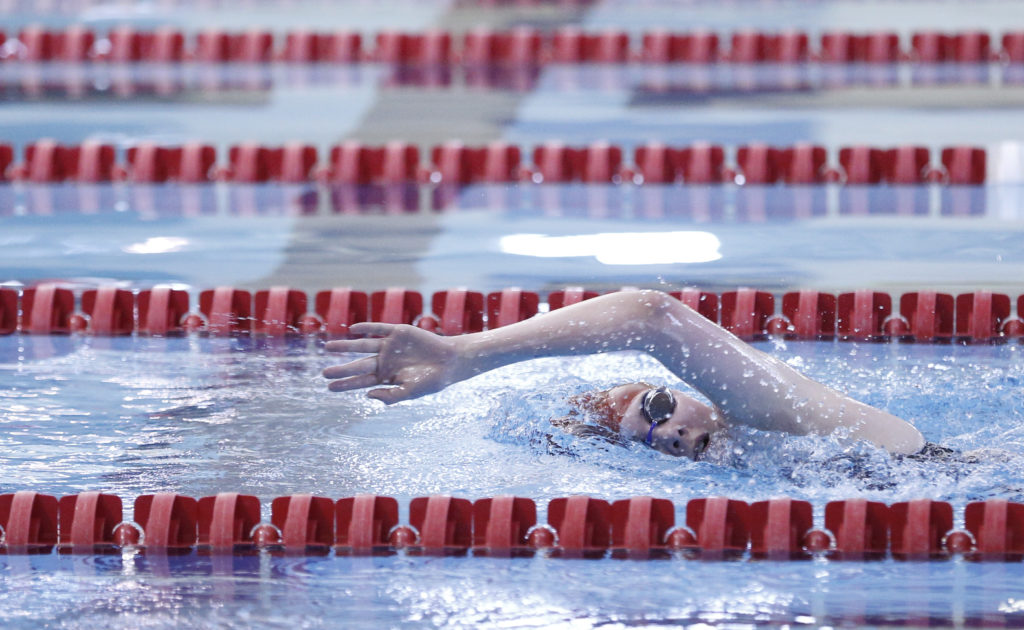 Lawrence High sophomore Meg Peterson competes in the first heat of the 200 free during a quad on Friday, April 25, 2014, at Free State High. 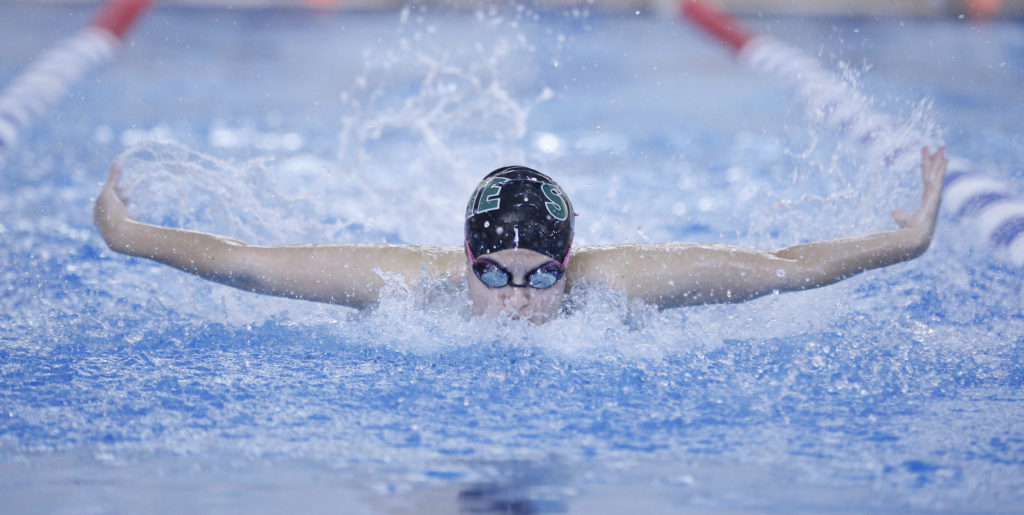 Free State senior Lucy Sirimongkhon-Dyck competes in the second heat of the 200 IM during a quad on Friday, April 25, 2014, at Free State High. 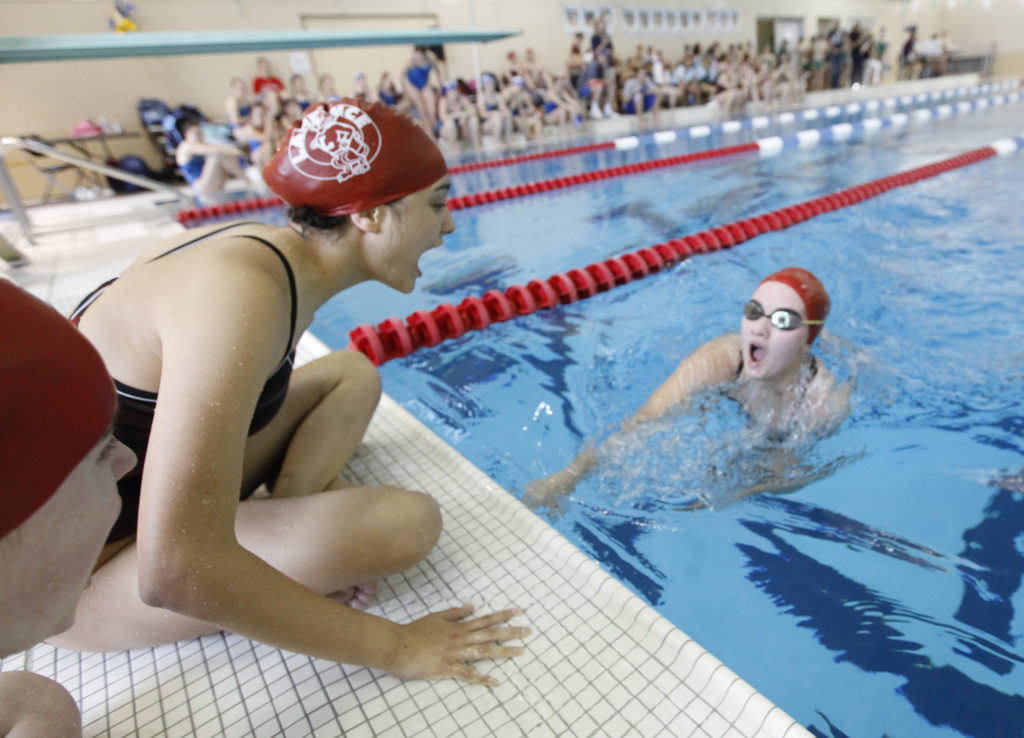 Lawrence High freshman Vanessa Hernandez, left, cheers her teammate and fellow freshman Abbie Treff as Treff competes in the 200 IM during a quad on Friday, April 25, 2014, at Free State High.

For the record, sisters Lucy and Sydney Sirimongkhon-Dyck would like to make one thing clear: They are two different people.

Sure, they both swim for Free State High and perform at a high level. But they compete in different individual events and are nearly three years apart in age.

So why is it that new teammates mistake one for the other or think they are the same person? Even their FSHS coach, Annette McDonald, once couldn’t tell which of the sisters appeared in a photo from competition — a more difficult task, considering the wave, swim cap and goggles.

“We don’t mind,” Lucy, an 18-year-old senior, said after the two helped the Firebirds win Free State’s triangular Friday at Lawrence Indoor Aquatic Center. “We do look a little alike, and it’s not insulting or anything.”

Sydney, 15, and a sophomore, also somewhat understands how the confusion gets started, with their similar personalities playing a part.

“We laugh at a lot of the same things, and we tell the same jokes,” she said.

However, that’s where most similarities end. Lucy is older, Sydney (5-foot-4) is two inches taller, and though they both began swimming at young ages, with the Ad Astra club, they found themselves succeeding in different events.

“My best stroke is her worst stroke,” Lucy said, “and I’m not nearly as good as she is at her best events.”

Lucy prefers the backstroke, an event in which FSHS secured the top six spots, and she finished second (1:03.85) to teammate Eliza Anderson (1:03.0) Friday.

“I always tried to be better at backstroke,” the younger sister said, smiling, “just so maybe I could race her a little bit, but that never really worked out. And it was better for us to find different strokes, so then we weren’t mad at each other or anything.”

When the two of them were much younger, their father, Kirk Dyck, wanted them to swim on the same relay teams, but they couldn’t because they were in different age groups. That’s not a problem anymore, now that they’re in high school. They teamed with Cierra Campbell and Alexa Malik to win the 200 medley relay.

Of course, they never did get around to becoming a doubles beach volleyball team, another idea hatched by their father.

“Neither of us are very tall,” they said in unison, laughing afterward.

Lawrence finished third at the triangular.