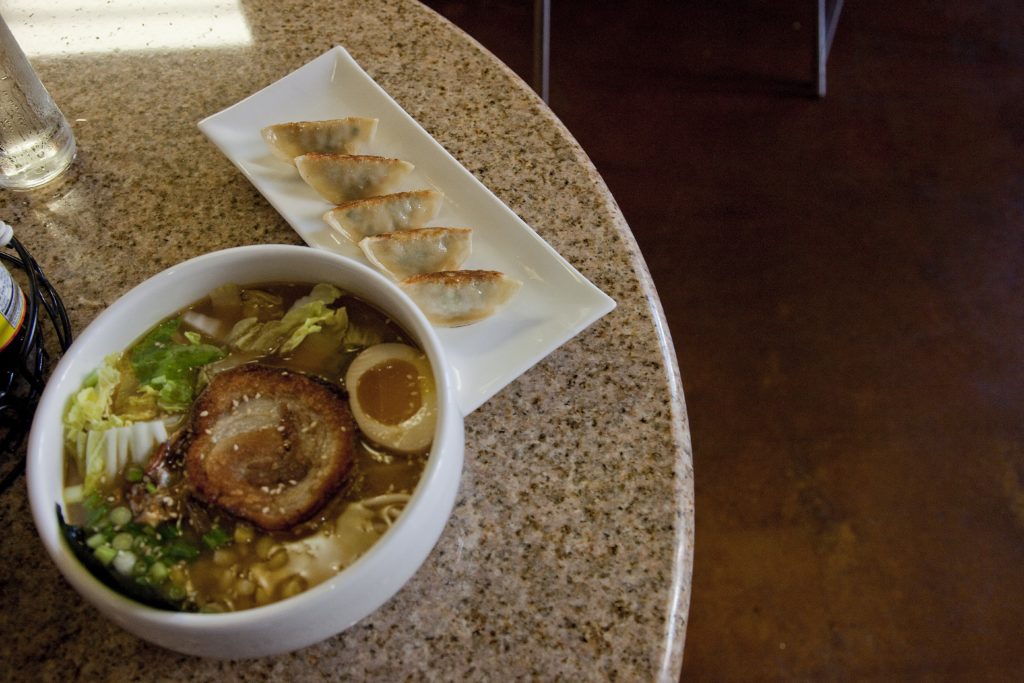 The Hokkaido Tonkotsu Miso Ramen and gyoza at Ramen Bowls in downtown Lawrence are hot sellers.

Some customers expected spicy ramen, which isn’t traditional of Japanese ramen, Tim says. But to satisfy those looking for a spicy experience, the restaurant recently launched Ghost Ramen. It’s the traditional miso ramen cooked with ghost peppers (aka bhut jolokia peppers), a chili pepper known to be the hottest pepper in the world. For $20, brave individuals are welcome to give this large dish a try, and receive the meal free, as well as a T-shirt.

Opening a new restaurant is not for the faint of heart.

And opening said restaurant in a location known as the graveyard for new businesses? That takes real guts. But so far, Ramen Bowls has been surprisingly successful.

With about a month and half under its belt, the new spot at 125 E. 10th St. has catered to Lawrence’s obvious hunger for Japanese ramen and Hawaiian-Pacific eats. It’s a taste not even owners Shantel and Tim Grace knew this town wanted, but hoped would gain a gradual following. After all, Ramen Bowls is the first ramen bar in Kansas, let alone Lawrence.

“We felt it would be a very slow process to introduce people to Japanese ramen and Hawaiian cuisine, but we were totally wrong,” Shantel says. “From the first day we opened, we were totally slammed.”

The traffic was both good and bad, she says. Originally, the Graces planned on a staff of six-to-eight employees, but that soon proved to be too small to handle the ramen demand. Now with nearly 40 employees, it seems this business has quickly made its presence known.

The 10th Street location is notorious for the many, many restaurants that have tried to make a name for themselves (the last, Queen Lizzy’s Fish and Chips) but ended up going out of business rather abruptly. After the announcement in this newspaper’s Town Talk column that a ramen bar would occupy the space, several comments were made that it was a “cursed” space. Admonitory good lucks were given.

“Tim and I read that and were like, ‘Oh my God, what have we done?'” Shantel recalls. “We did tell everyone we got a voodoo doll and got the curses out of this space.” 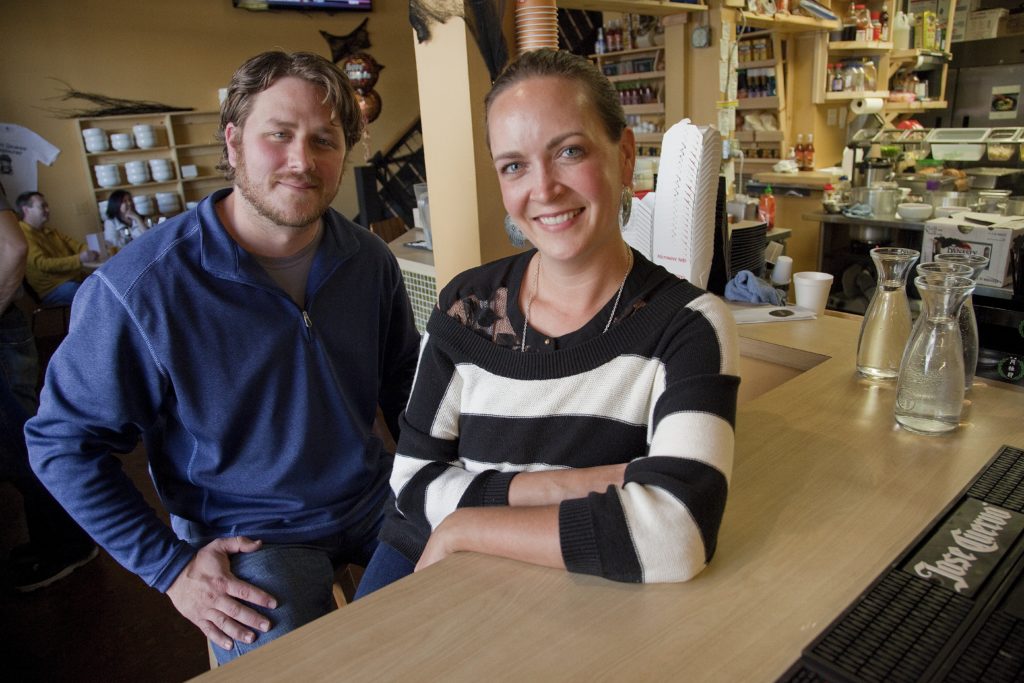 Neither of the owners are chefs or have backgrounds in cooking. Their love for Japanese ramen sparked from living in Hawaii for several years and hanging out in ramen bars with friends after work (Shantel as a writer for Honolulu Weekly, Tim as a consultant in the shipping industry). After the married couple had a baby, the KU alums decided to move back to Lawrence, where they met, and fill the ramen void.

Their cooks are trained by a Japanese ramen chef who lives in Singapore. The broth is made from scratch, taking six to eight hours daily, and the noodles are flown in fresh every day to bring the most authentic dishes possible to the table. Ramen Bowls had a three-week soft opening to work out any kinks in recipes.

“Nowadays you see people on their phone taking pictures of their food, writing a review just like that,” Shantel says. “And during soft opening you have no grace period. And people are unapologetic about what they write.”

The two most traditional ramen dishes on the menu have been the most popular, the couple said, which wasn’t expected. The Hakata Tonkotsu Shoyu Ramen ($9) is a pork-bone broth with yakibuta (slices of grilled pork belly), Aloha shoyu, tamago (soy sauce braised egg), noodles and vegetables. The Hokkaido Tonkotsu Miso Ramen ($10.50) is six different blends of Hokkaido miso paste in a creamy pork-bone broth with yakibuta and tamago, noodles, corn kernels and other vegetables.

“People here are so knowledgeable of Japanese cuisine,” Shantel says. “So ready for it. People have already tried it in different cities, or in Japan or in Hawaii, so we were really surprised about that and it was a great, wonderful surprise.”

They say they are already reaching a point twice a day where every single bar stool and table is occupied. And despite advice not to deliver, as noodles sitting in broth for 20 minutes can compromise the dish, customers wanted ramen delivered, so Ramen Bowls made it happen. Time to rejoice, college students.

Other plans for the future include a karaoke night (Shantel is a former singer-songwriter based out of Nashville), as well as other events to foster a chill, late-night setting. The restaurant has a small bar but boasts a large drink menu of Hawaiian and Japanese cocktails and sake.

The Graces both feel strongly that Lawrence was the perfect place to introduce this cuisine with the community’s support for global food and local businesses. It also helps that they have their families here.

“If [ramen] was going to work, this is the place to do it,” Tim says. “Lawrence is Lawrence, it’s great. I love it just as much as I love Hawaii.”