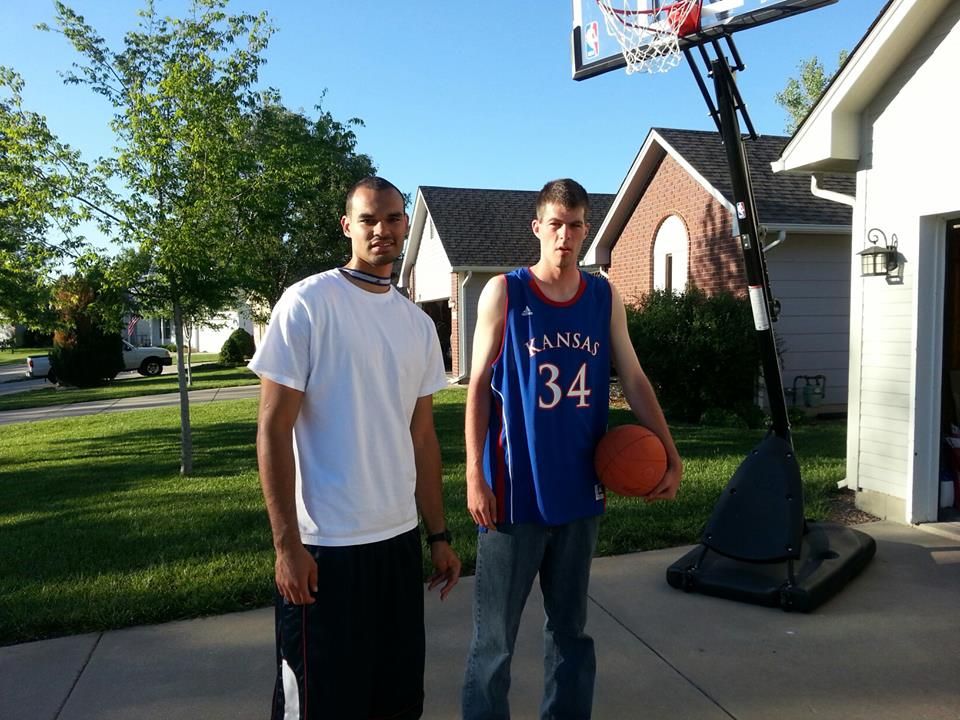 Perry Ellis was a surprise visitor on Sunday at the home of Special Olympian Tony Parker. Friends of Ellis who live Bel Aire, a Wichita suburb, told Ellis that Parker regularly shoots hoops in his driveway wearing an Ellis jersey, so Ellis and his friends stopped by to shoot hoops with him.

The young man at the door of her home in the Wichita suburb of Bel Aire, wondered if Tony, 27, could come out to shoot hoops.

But once the young man let her know who also wanted to shoot hoops with Tony, the food went cold.

Kansas University sophomore Perry Ellis, Tony’s favorite player, was in the neighborhood visiting friends. When he heard about the man who forever was shooting hoops on his driveway wearing a Kansas No. 34 jersey, he wanted to meet him before driving back to Lawrence.

“I had just gotten Tony a basketball goal two weeks ago for his birthday,” Barb said of her 6-foot-9 son. “I told him ‘Do not hang and dunk on it. Just don’t do it. You can get hurt. You can break the rim.’ He didn’t have it 24 hours and of course he hung on it and snapped the rim off. We were able to fix it and I told him it was the last warning.”

Tony heeded his mother’s warning and thanks to that, he was able to shoot hoops with his hero.

“You can’t even imagine what that did for Tony,” Barb said. “Tony doesn’t show a lot of emotion, but he just lit up. It really, really did make his day.”

The Parkers, mother and son, lived in Lawrence from 2007 to 2012, when Barb decided to move to Wichita, where she had family members who could lend support to caring for Tony, who has intellectual disabilities.

Barb landed a job at Wichita Heights High, Ellis’ alma mater. She said she kept hearing nice things — some of the same qualities she sees in her son — about Ellis during her tour of the school.

“I told them I couldn’t accept this job until I got a picture with Perry Ellis,” she said, laughing. “When he came to our house I asked him if he remembered the crazy teacher who wanted a picture taken with him, and told him that was me.”

Ellis’ visit to the Parker driveway no doubt will motivate Tony to work harder on his game. As for Barb’s main motivator, nothing has changed there.

“Tony is loved by all,” Barb said. “He kind of has that heart of gold. He’s just a real caring person, always been that way. He’s the reason I’m a teacher. He is my inspiration.”

When Barb took night classes in Garden City toward her associate’s degree, Tony sat next to her. Ditto for her classes toward a bachelor’s degree from Ottawa University. Wearing headphones, Tony also accompanied his mom for the first of two years of classes toward a master’s from KU.

Mother and son also share a passion for KU basketball, but Ellis’ jersey isn’t the only one Tony owns. He also has been known to wear a San Antonio Spurs No. 9 jersey, worn by his namesake: All-Star point guard Tony Parker.