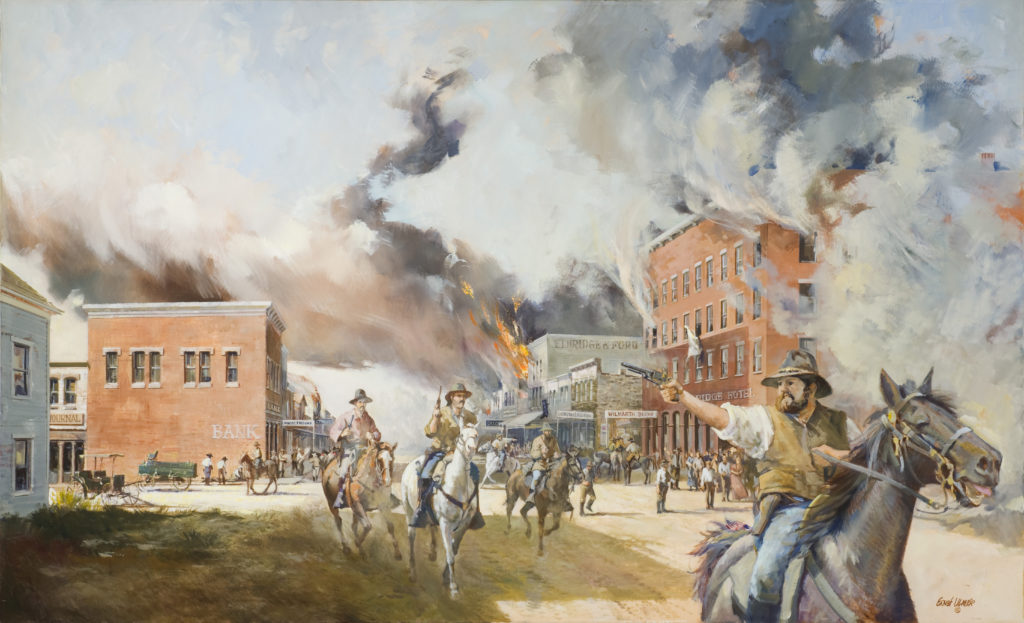 In the predawn hours of August 21, 1863, the city of Lawrence slept peacefully unaware of the destruction that was about to occur.

At a summit southeast of the town, 300 to 400 Missouri guerrilla fighters prepared to march on the unsuspecting residents. William Quantrill, a charismatic Confederate guerrilla leader, commanded the bushwhackers — guerrilla soldiers that fought along side the Confederacy during the Civil War. Some men in the group became restless as they waited for scouts to return from Lawrence.

Around 5 a.m., Quantrill ordered his men to charge on the city. By 9 a.m. they had cut a destructive path through the city, killing or wounding nearly 200 civilians and burning all but a half-dozen structures.

Sowing the seeds of destruction

Lawrence residents felt no particular danger leading up to Quantrill’s raid. Threats of attacks were nothing new to the city. Lawrence had been sacked seven years before, and since then rumors of Missouri raiders planning attacks had come and gone. Just a few weeks before the massacre, Lieutenant T.J. Hadley, who was stationed in Lawrence with a few dozen men, received a letter indicating that Quantrill planned to raid the town. Reinforcements were sent, but after no attack came, the soldiers withdrew. 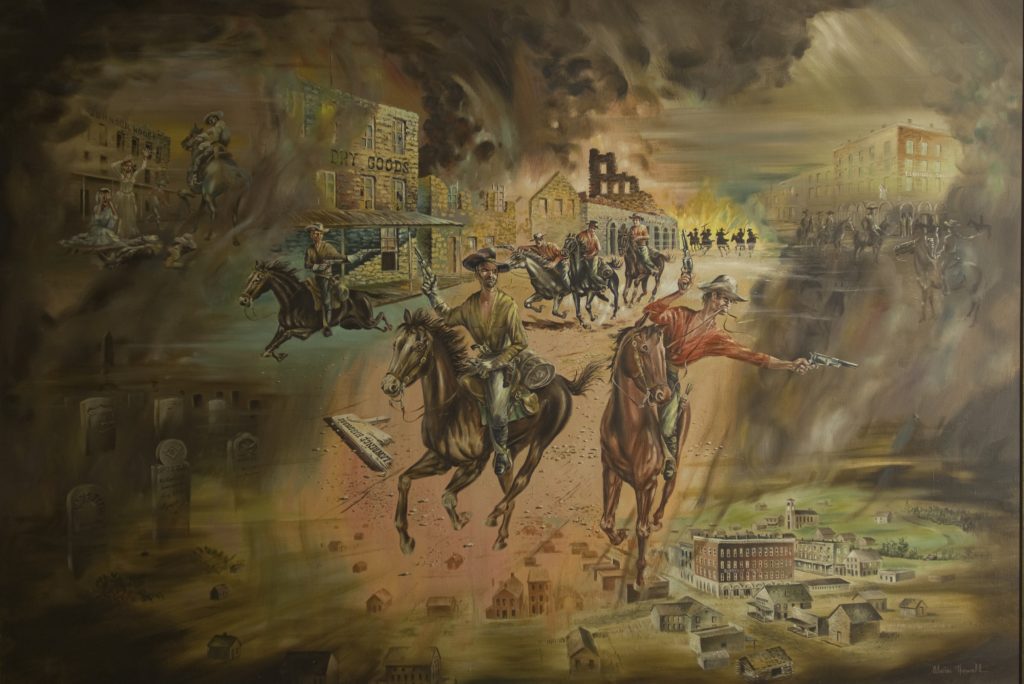 Alvin Howell painting of Quantrill's Raid, commissioned in 1966 for old Lawrence City Hall, title unknown. The image is reproduced courtesy of the Douglas County Historical Society, Watkins Community Museum of History, where the painting is currently in storage.

The seeds for Quantrill’s aggression towards the city were sown in the years and months before the attack. He had come to Kansas in the 1850s, teaching school south of Lawrence. During this time, Quantrill’s political views probably leaned against slavery. When a conflict over his land claim arose along with accusations of a criminal past, he fled to Missouri and joined a band of looters.

In 1860 he returned to Kansas under the name Charles Hart and taught in Lawrence until the school was closed. Desperate for money, he found profit in capturing runaway slaves. With his political views changed, he joined other pro-slavery advocates in Missouri.

Since its founding in 1854, Lawrence had been a hub of anti-slavery forces. Jayhawkers, the anti-slavery counterparts to bushwhackers, from the town and surrounding area frequently raided Missouri farms and towns. Quantrill and many of the men with him despised Senator James Lane, a strong anti-slavery voice who lived in Lawrence. Quantrill wanted to capture or kill Lane and plunder the city as revenge for attacks in Missouri.

Aggression among Quantrill’s men was fueled by the collapse of a women’s prison in Kansas City a few weeks before the raid. The women, all under 20 years old, were imprisoned for giving aid to Confederate sympathizers and bushwhackers. William “Bloody Bill” Anderson’s 14-year-old sister and three other young women were killed when the three-story structure collapsed. Anderson was a major player in Quantrill’s band of ruffians, and committed most of the murders in Lawrence that morning. Many bushwhackers and pro-slavists believed the disaster was the work of Jayhawkers, but no evidence supported this.

Lawrence Coffell painting of Quantrill's raid, date unknown. The image is reproduced courtesy of the Douglas County Historical Society, Watkins Community Museum of History, where the painting is currently in storage.

As dawn broke, Quantrill and his men descended on Lawrence from the southeast with instructions to kill any man old enough to carry a gun.

On the outskirts of town, the raiders found a group of tents filled with goods taken during the Jayhawkers’ raids in Missouri. A number of freed slaves and African-American soldiers still asleep there were awoken by gunshots. The startled men fled away from the camp, but the bushwhackers chased them to the river. The men were either shot or drowned.

“None succeeded in reaching the opposite shore,” John McCorkle wrote in his 1914 account of riding with Quantrill.

The riders moved into the heart of Lawrence. On New Hampshire Street between Ninth and Tenth streets they attacked an encampment of young Union recruits. When Quantrill’s gang left the encampment, 17 of the 22 boys had been slain. They were unarmed.

Reaching the central business district, Quantrill dispatched his men in various directions to search for plunder and in search of notable Jayhawkers. At the Eldridge House, Captain A. R. Banks waved a white sheet out his window at the raiders. He requested that Quantrill not harm any of the hotel’s residents. Abiding, Quantrill ordered all guests out into the street and took them prisoner in the neighboring City Hotel. The owner of that establishment had offered charity to Quantrill when he was living in Lawrence as Charlie Hart, so Quantrill ordered his men to leave the City Hotel alone.

At the Eldridge, his men sacked the building, removing valuables before torching it. For the second time in 10 years Missourians burned the Eldridge House.

Across Lawrence, Quantrill’s raiders tore through houses. They attacked the home of mayor George Collamore. He hid from the attackers in his well, but suffocated there when the men lit his house on fire. His son and a friend died trying to rescue him.

The offices of Lawrence’s three newspapers, the Journal, Tribune and Republican, were leveled. The papers were anti-slavery publications and had been the victim of the previous sacking seven years before as well. Tribune employee John Speer Jr. was killed by the raiders while trying to defend his home.

The Bell residence was under construction at 1008 Ohio Street. Mr. Bell left his wife and eight children there to confront the attackers. A raider who happened to be an old friend of Bell’s shot him some time later.

Dr. Walter Griswold, a local pharmacist, and a two other men were murdered in Griswold’s yard in front of his family.

At James Lane’s house, Quantrill was told the senator was not home. Having previously heard that Lane was out of town, Quantrill decided not to pursue a search for him. In fact, Lane had been home — but escaped through a cornfield in his nightclothes.

This narrative of Quantrill’s Raid is drawn from the following historic accounts:

“The Lawrence Massacre; Another Account of the Terrible Tragedy,” The New York Times, Aug. 27, 1863.

Aftermath of the bloodshed

Quantrill and his men rode out almost as quickly as they came in. In their wake they left the city near total destruction. Victims of the massacre lay dead on the streets, on their porches and in their homes.

News of the attack spread quickly. A New York Times article from a few days after the raid described Massachusetts Street as “one mass of smouldering (sic) ruins and crumbling walls, the light from which cast a sickening glare upon the little knots of excited men and distracted women, gazing upon the ruins of their once happy homes and prosperous business.”

The Times reported that it took several days to find the bodies of the nearly 200 residents that died. It took Quantrill just four hours to wreak havoc.

Immediately following the terror, Lane formed a posse and chased Quantrill with a detachment of Union soldiers. They pursued Quantrill for two days south towards Paola, Kans., and then east into Missouri. By the time they reached the Grand River in north central Missouri, the bushwhackers had dispersed into the woods.

For the most part, Quantrill, Bloody Bill and the rest of the marauders escaped punishment for their actions in Lawrence.