Amy’s Meats a model of sustainability 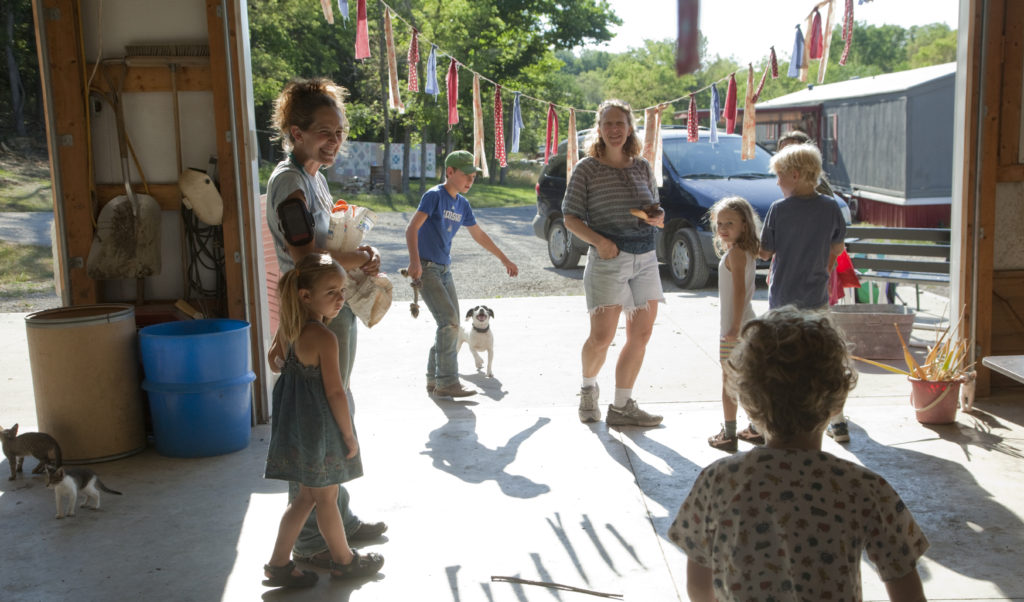 CSA member Kristy Lollar, right of center, picks up produce at Amys Meats at the Homestead, a small family farm north of Lawrence raising Jersey milk cows, lambs, pigs, honey bees and free grazing chickens. Amy Saunders, left, stands next to her daughter, Aliya, 5. Amy's Meats was named as one of Mother Earth News Homesteaders of the Year and feature them in the current issue of the magazine.

A visit to Amy’s Meats at the Homestead feels like walking back into a simpler time.

There is electricity and refrigeration, and no one’s wearing bonnets and prairie skirts. But at this hillside farm in rural Lawrence, the Saunders family works hard to raise most everything they need to eat from the ground up, plants and animals alike.

A national magazine has taken note. Mother Earth News named Amy’s Meats one of its six Homesteaders of the Year and features the farm in its August/September edition, on sale now.

“I guess not everybody’s doing it the way we do it,” Amy Saunders said. “It’s a different lifestyle.”

Before moving in about two and a half years ago, the family rented a home and a farm in separate locations, packing lunches and driving a few miles twice a day to handle chores.

After Aliya was born, Dan — who’d been working at a ranch — took a job as a journeyman pipe fitter, securing the financial stability the family needed to purchase their homestead.

“There’s so many other things we can do now,” Amy said. She and the children, who are home-schooled, take care of chores during the day and “save the heavy lifting” for Dan when he comes home.

The “so many other things” include a menagerie of animals and plantings.

Kittens tumble around the floor of the barn, and a Jack Russel terrier named Hank lazes in the sun.

A small flock of sheep — under the careful watch of a herd-dog named Outha — bleat and jingle their bells in the woods. In addition to being raised for their meat, the sheep are serving a second purpose right now: lawn mowing, eating and clearing brush in an area the family wants to use for something else. The children are allowed to name their animals (hence Princess Barbie Sparkle the baby sheep, name courtesy of Aliya), but Amy said the children also understand that most are ultimately there to be food, not pets forever.

There’s five milk cows, a bull and three calves — one vocally upset and bawling over being separated from its mother on this particular day. Broiler chickens and laying hens cluck around the yard, and pigs are expected to move in soon.

There are two colonies of honeybees, a large garden, an orchard, and a root cellar for storage in the works. Hanging inside one of the outbuildings are homemade brooms-in-progress made from homegrown broom corn.

In a few years, the Saunderses hope to build a house that’s off the grid, like some of their other components already are.

One of the family’s goals with their homestead is sharing their lifestyle and increasing appreciation for the work it takes to produce food. For example: Did you know it takes nine months to make a pizza?

Home grown pizza was the focus of a recent day camp, in which children made pizzas while learning that garlic was planted last November, tomatoes require toiling in the hot sun, cows must be milked to create the cheese, wheat grown on site needs to be processed into flour for the crust, which is sweetened with honey from the on-farm bees.

Amy’s Meats has sold meat and produce at farmers markets for 10 years but this year turned attention solely to a CSA, or community supported agriculture, program instead.

“We wanted to focus more on the CSA and getting people reconnected with where the food came from,” Amy said.

The Amy’s Meats CSA has about 15 participating families, and in addition to a membership fee each is required to contribute 10 volunteer hours for the season in exchange for weekly produce, meat and eggs. Because of rules governing the sale of raw milk, Amy’s Meats has a separate CSA for members to purchase fresh milk, also picked up in person at the farm.

Amy said she understands raising meat and vegetables the natural way isn’t for everyone — a grass-fed animal, for example, can take 18 months to mature whereas a feedlot gets the job done in half the time.

“The economy asks for cheap, fast food,” she said. “The pressure’s there.”

But Amy’s makes sustainability a priority, and with customers willing to pay a premium for naturally raised products, they’re able to provide them.

Each of this year’s Homesteaders of the Year represents a different way to live a “satisfyingly simple, self-reliant lifestyle,” said Jennifer Kongs, managing editor of Mother Earth News. “Dan and Amy’s hard work and respect for sustainable living, family and community make them exceptional examples of what we look for.”