A knockout workout: Boxing for fitness takes hold in Lawrence 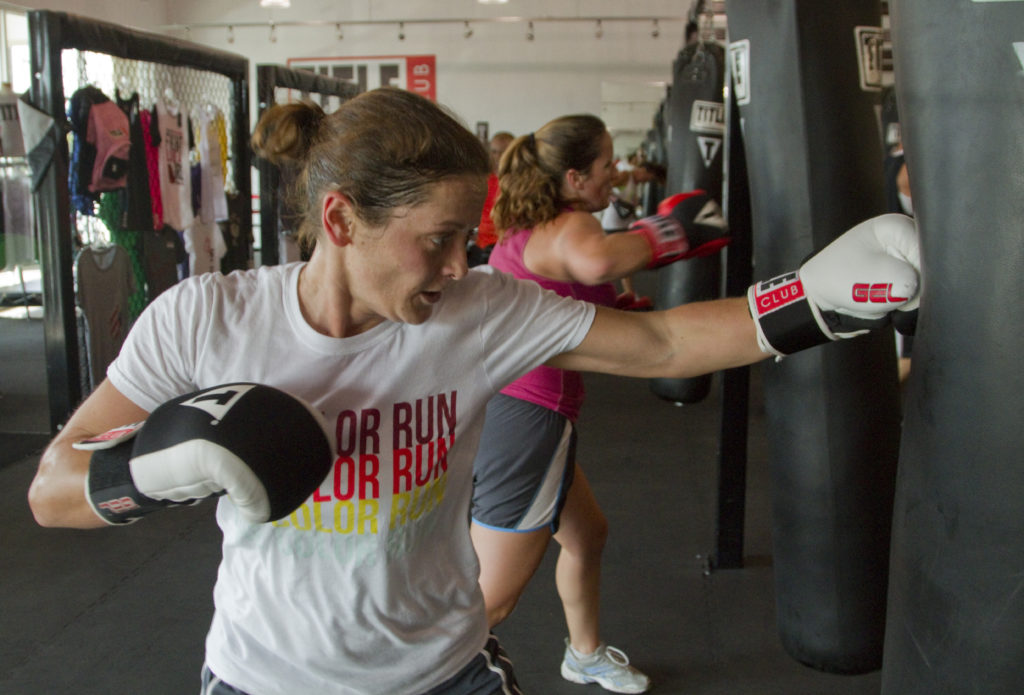 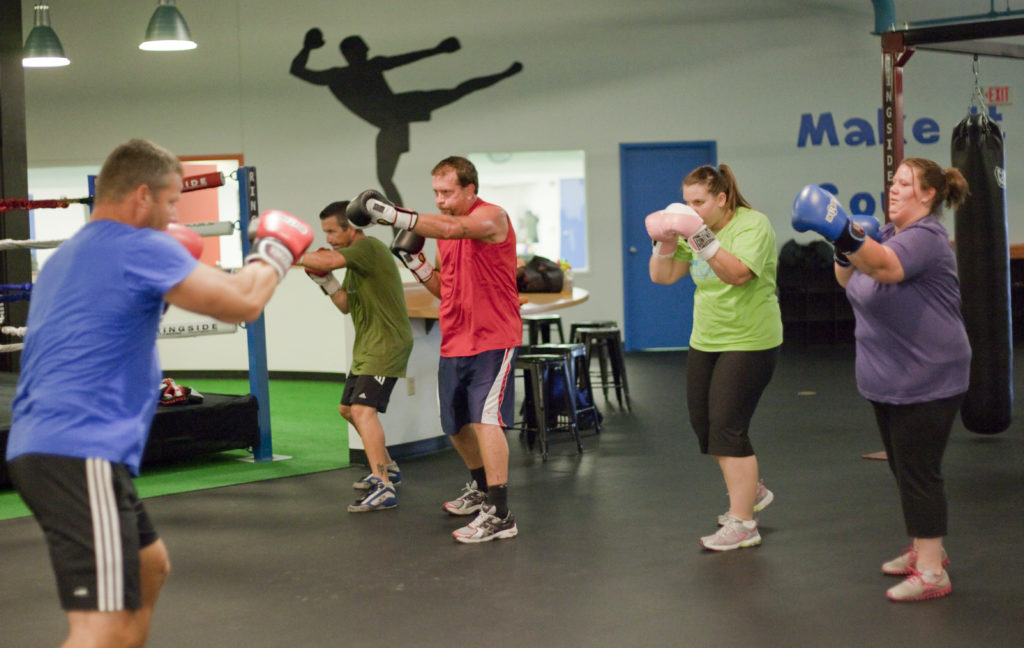 Before you try it

As in any new workout, exercising a couple simple precautions can help you avoid injury.

Phillip Vardiman, an athletic trainer and assistant professor of Health, Sport and Exercise Science at Kansas University, offered these tips for folks who want to give boxing a whirl.

First, there’s nothing wrong with easing into the workout to build up strength.

“You may be an avid runner or an avid cyclist, and you could have a good cardiovascular fitness base, but when you’re exercising in a different way, you’re not going to have the muscle coordination,” Vardiman said. “You’re going to use muscles you haven’t used in a long time.”

Let instructors help you with your form and, if needed, ask them to suggest exercise modifications that accommodate your physical limitations.

“They’re going to try to push you, but they’re going to know when they should back off a little bit and let you go at your own pace,” Vardiman said. “That’s going to prevent a lot of the major injuries.” 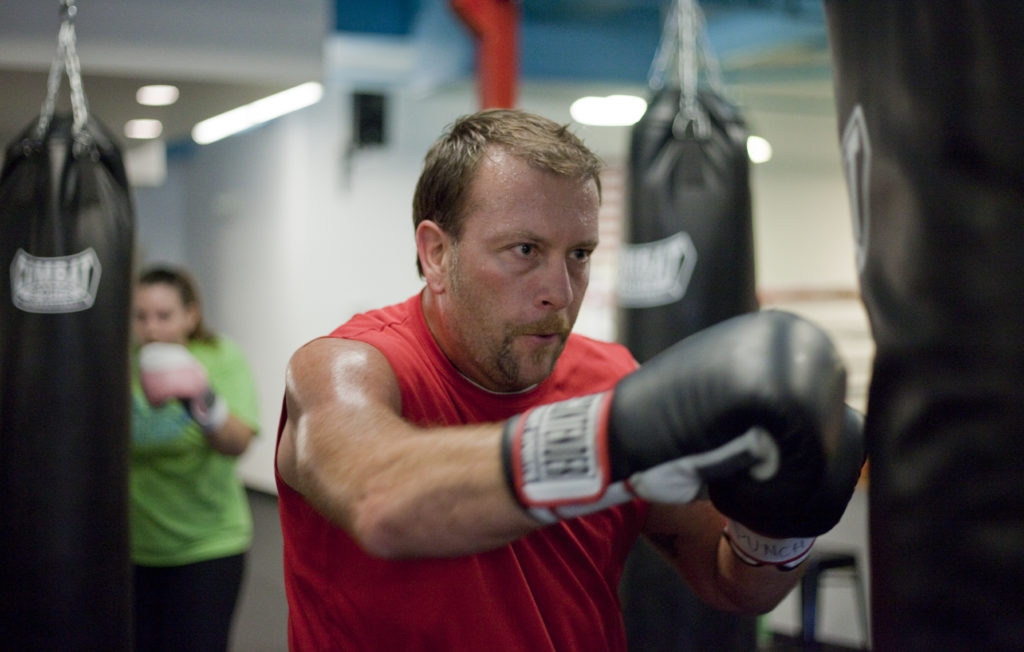 Not long after successfully dropping close to 50 pounds, Shelly Sheets heard a friend was taking boxing classes in Lawrence.

The 33-year-old Pomona resident decided to try it herself and was addicted after the first class. She comes to Lawrence to box four or five times a week, and none of those 50 pounds has been back since.

“This has been amazing to help me stay in shape,” Sheets said.

Sheets isn’t the only person addicted to the high-energy, full-body workout. With two gyms opening within the past 10 months, the boxing-for-fitness trend has arrived in Lawrence in force.

“There’s always that interest for people to try something new and different,” said Brad Goetsch, who owns Punch Boxing and Fitness, 4931 W. Sixth St. “It’s easy to get hooked on doing these types of classes.”

To be clear, this is boxing for fitness, and the only sparring is between you and the heavy bag.

If there’s a ripped-up, cauliflower-eared, cage-fighter type wandering around the class, he’s not going to punch your lights out. Most likely he’s an instructor, and he’ll probably bark out exercises and correct your form but won’t scream insults if you falter or make you run until you throw up.

“That’s not what it’s about at all. It’s a very uplifting and encouraging workout,” said Jim Thomas, who owns Lawrence’s Title Boxing Club, 1520 Wakarusa Drive. “We have people puke, and that’s fine. If they want to go that hard in their workout, that’s up to them.”

Participants get out of the class what they put into it, Thomas said, adding that everyone can go at his or her own intensity level.

In a recent kickboxing class at Title, where Sheets was working out, music blared and participants punched the 110-pound heavy bags from nearly every angle possible. Same with kicks — low, medium, high, forward, sideways, standing and kneeling. Jogging, crunches and stretches came before and after class, or between sets.

On top of working limbs, lungs and heart, boxing also works the body’s core strength. With the correct form, that’s where a lot of the power behind a punch or kick originates.

The exhilaration factor is one of boxing’s most addicting characteristics, said Goetsch, who likened the rush after his first boxing class to what he felt after intense workouts as a college wrestler.

“You’ve done everything you can, you’ve pushed yourself as hard as you can,” Goetsch said, “and then you get that sense of accomplishment.”

While men and woman of all ages can be found in a boxing class, the overwhelming demographic is women in their mid-20s to mid-40s.

Title Boxing Clubs describes itself as the fastest-growing fitness concept franchise in the country. Since the first club opened in 2008 in Overland Park, clubs have spread to at least 12 other states with hundreds more franchises sold, Thomas said.

Thomas opened the Lawrence location in November and offers strictly boxing and kickboxing classes from morning to night, seven days a week.

Goetsch opened the first Punch Boxing and Fitness in Shawnee in 2009 and moved it to a larger Shawnee location, 5421 Martindale Road, in April. He opened Punch in Lawrence in January.

Punch aims for a holistic, family-oriented approach. In addition to boxing and kickboxing, the club offers yoga, interval and other fitness classes. There are also youth and family boxing classes.

Both clubs have loaner gloves, but they also sell new gloves on site for people who want their own (which is most people).

A lot of people are drawn to boxing because they enjoy the club atmosphere — having a trainer and being in a group, said Phillip Vardiman, an athletic trainer and assistant professor of Health, Sport and Exercise Science at Kansas University.

Vardiman said finding a workout you enjoy is important for meeting fitness goals.

“If exercise is fun,” he said, “then you’re probably more likely to do it.”