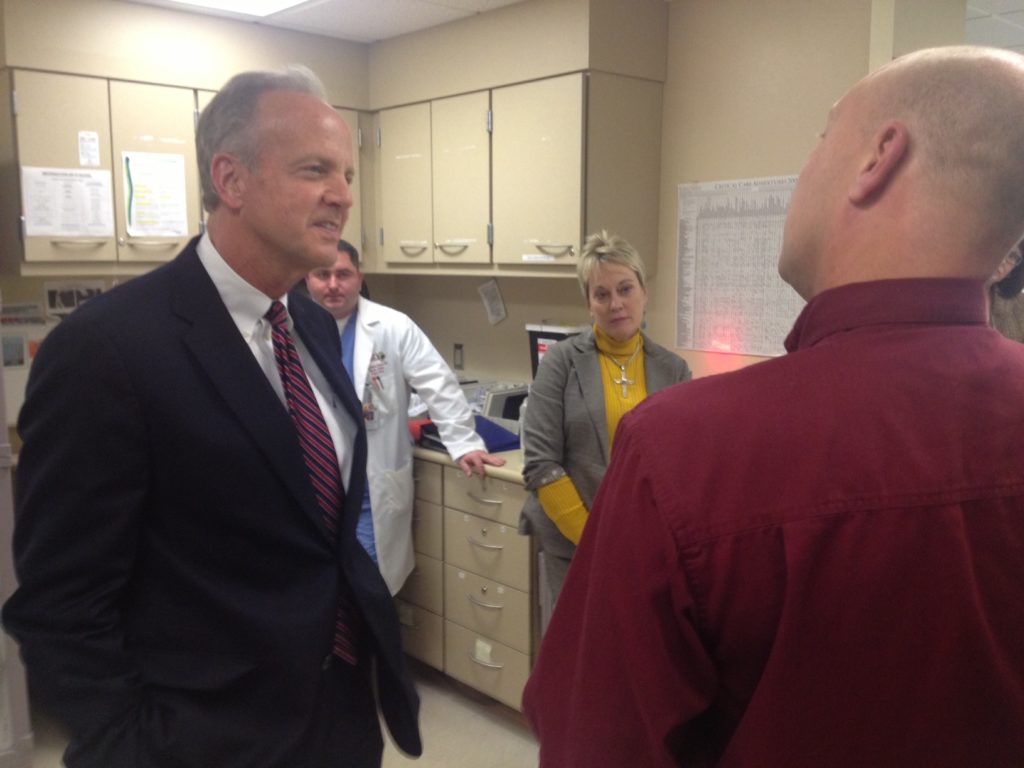 Sen. Jerry Moran speaks with LMH pharmacist Greg Burger about the hospital pharmacy's use of electronic medical records in the administration of medicine.

When it comes to the use of electronic medical records to administer care, U.S. Sen. Jerry Moran, R-Kan., says Lawrence Memorial Hospital is a model.

Moran stopped by LMH on Friday afternoon for a tour to see how the hospital’s pharmacy uses computer systems to control the ordering and the delivery of medication. On his mind, he said, was how smaller hospitals in other parts of the state might be able to make use of the same technology.

“I would guess that many hospitals in Kansas would see Lawrence Memorial Hospital and wish they had the opportunity to do this,” Moran said.

LMH first began using electronic medical records in 2004, and now every aspect of medicine delivery is controlled by the hospital’s digital system. Doctors record their medicine orders electronically, and nurses scan barcodes that record which medication is being delivered to which patient by whom.

All of that control cuts down on mistakes, pharmacist Greg Burger told Moran as they stood in a medication room Friday where drugs are measured and dispensed by an electronic system.

Moran said the hospital obviously had a top-flight system in place.

“They have a lot to brag about here,” Moran said.

In 2012, LMH was named for the second straight year as one of the top 100 “Most Wired” hospitals in the country by the publication Hospitals & Health Networks.

Many smaller hospitals in rural areas of the states likely lack the resources to install such extensive systems, Moran said, however much they might like to. He said he’d like such care to be available to all Kansans.

But he said that the hospital’s achievements could serve as evidence for Kansas University students that, when they graduate, they won’t need to leave the state to be working in the forefront of innovation in fields such as health care.

“If you want to excel in medicine, you can do it in Kansas,” Moran said.

— Kansas University reporter Matt Erickson can be reached at 832-6388. Follow him at Twitter.com/LJW_KU.