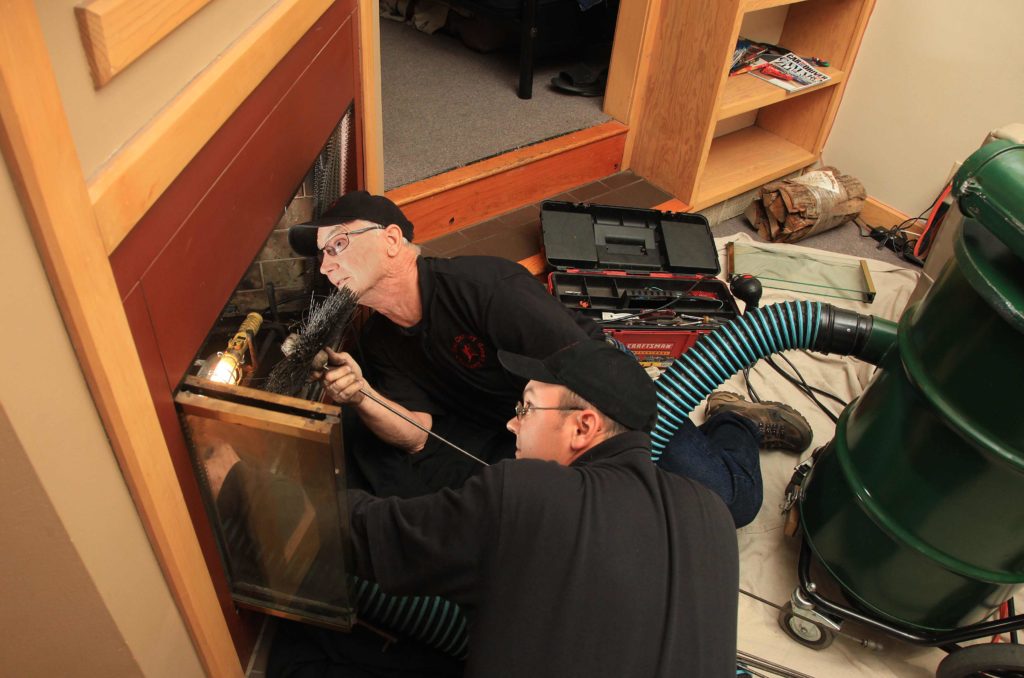 Allen Clough, top, and his son, Jason Clough, both of Perry, clean a fireplace in Old West Lawrence on Thursday, Nov. 15, 2012. The chimney sweeps run a modern operation with little soot, no top hats and no dancing, Jason says.

Allen and Jason Clough won’t sing you a song covered in soot. They don’t dance. This father-son chimney sweep duo is all business and no Hollywood.

“They want us to wear a top hat and sing the ‘Mary Poppins’ song,” Jason said. “I don’t even know the song they are describing.”

What Jason and his father do know is their job of caring for an often neglected aspect of home maintenance.

As the weather gets cold, fireplaces get hot and the Cloughs get busy, cleaning and repairing four to five Lawrence-area chimneys a day.

They make sure the chimneys are clear of cobwebs and animal nests. And of course they sweep the chimneys to remove creosote, the tarlike substance that builds up after frequent use.

But before they sweep, they must get to the chimney, which can be tricky.

“The main hazard is going up and down the ladder,” Allen said. “When you get onto older houses with 12-pitch roofs, that’s where it gets a bit worse.”

You wouldn’t know it watching the two work.

On a frosty November morning, Allen shimmies 20 feet up a ladder onto a chimney. He looks down the flue, gives a yell, and Jason follows carrying an arm full of chimney brushes.

These brushes attach to an electric drill that spins them inside the chimney to remove any creosote. A vacuum at the chimney bottom provides 600 cubic feet of suction per minute.

It’s all very modern. There’s no Dickensian street urchin scurrying down the chimney covered in soot, like some might think. In fact, there’s very little soot at all.

“We’re not dirty, we are actually clean,” Jason said referring to the common stereotype.

“The first-timers stand there and watch over your shoulder, which makes you nervous, but we haven’t dusted them yet,” Allen added speaking of his 30-plus years of running his business, 21st Century Chimney Sweep. “That’s just not going to happen.”

Still, the idea of soot often turns away homeowners from the idea of having their chimneys swept.

That can be a costly decision, Allen said.

If the creosote isn’t removed, “(the chimney) will catch on fire. It will go up like a blow torch.”

Allen added that the 2,200 degree heat from a chimney fire can ruin the mortar, damage the bricks or, worse, catch your house on fire by shooting out blobs of flaming tar.

A chimney fire also means that a stainless steel liner must be installed to prevent further damage. Jason said that this can be costly and difficult.

And while that will reduce the buildup, Allen said chimneys should still be cleaned “after about a truckload or two of wood burned.”

The continuing need of chimney maintenance is good news for the Cloughs.

Allen has had his business since buying it in 1979 and enjoys the relationships and independence it provides him.

Jason grew up in the business and has been working with his dad for the last six years after graduating college.

“I can’t be in the office and do the same thing every time,” Jason said “That’s not how I grew up. I never saw my dad do that.”