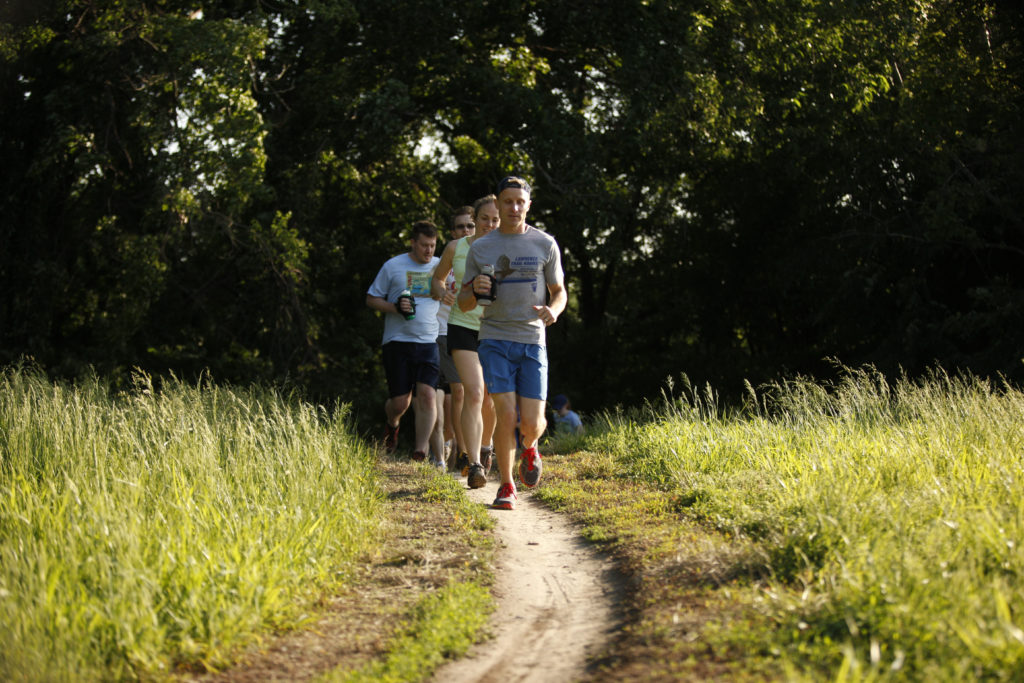 Justin Henning, Lawrence, leads a group of Lawrence Trailhawks runners along the North River Trail on Monday, May 7, 2012.

The buddy system is the best way to stay safe on Lawrence’s trails. Here are some of Lawrence’s organized trail-using groups: 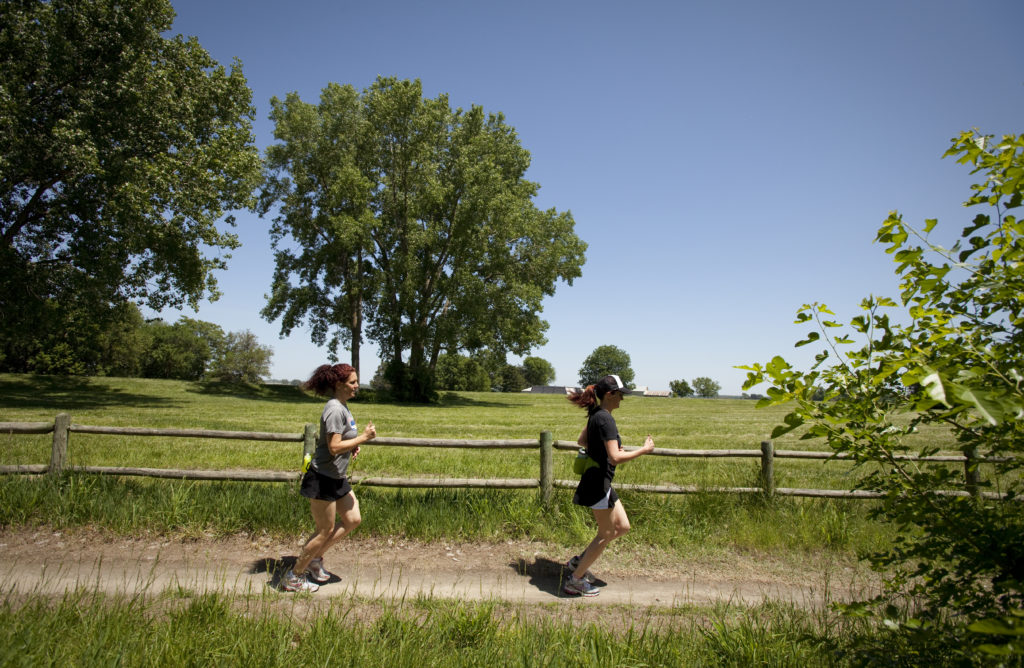 Lawrence residents Lori White, left, and Ricki Endsley take off around a turn as they run on the north river trails on Thursday, May 10, 2012. 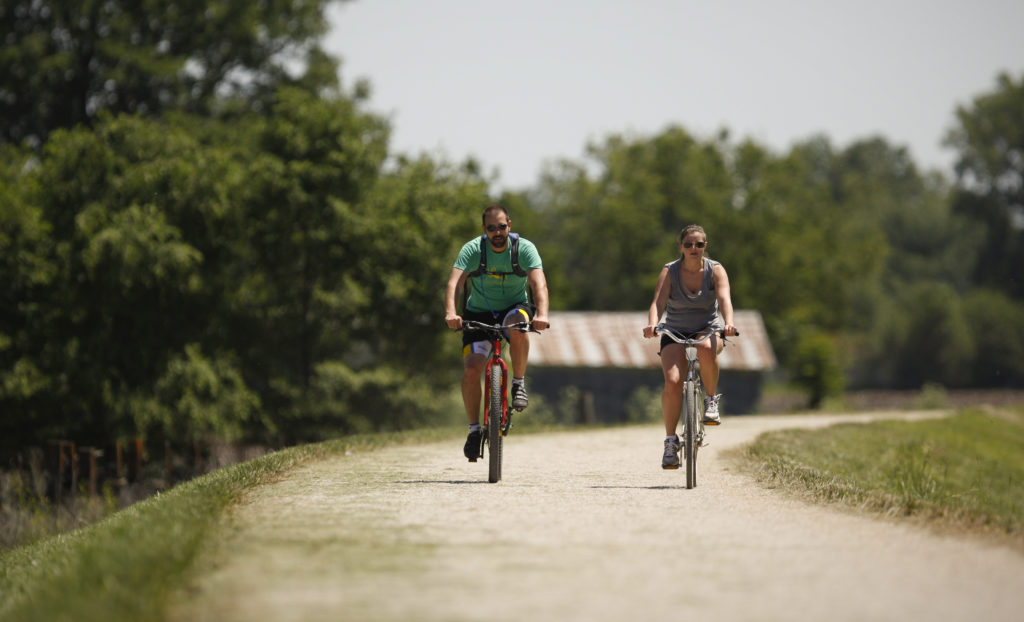 Lawrence residents Matt Salad and Elyse Inferrera ride along the levee trail on Thursday, May 10, 2012, in North Lawrence.

Leslie Swearingen, 66, once hiked regularly but hasn’t gotten out much in recent years. Now, the Lawrence resident says she has a number of health problems and doctor’s orders to start exercising again.

“I was thinking I could walk on a trail, and the scenery would be so nice,” Swearingen says. “It wouldn’t be the same as just plodding along the sidewalk.”

However, like many potential trail users tempted by spring weather and fresh air, Swearingen wonders, “How safe is it?”

Part of trail safety involves choosing the right path for your skill level and sureness of foot. Even though crimes are unusual — four have been reported in the past four years, police say — it’s important to follow personal safety guidelines, too.

Lawrence trail users range from strolling families to competitive athletes, and the city has routes to fit them all, says Mark Hecker, assistant director for Lawrence Parks and Recreation. He points out that in Lawrence, plenty of trails worth exploring are only minutes away.

“It’s not like you have to take a four-hour drive in the car to go walk around the woods,” he says. “You just pop over there in an evening and go take a walk.”

Here’s a look at some of the most popular trails for varying abilities.

Paved trails weave through woods and around Mary’s Lake, with loops ranging in distance from about a quarter-mile to 3 miles. They are fairly flat and easy to access from parking lots.

Lawrence Transit buses even stop at the nature center.

Lawrence Rotary Arboretum, 5100 W. 27th St., is home to a number of other easy, paved trails, including loops around the pond and softball complex.

The South Lawrence Trafficway trail is paved but long, Hecker says, making it popular for bicyclists or runners looking to cover more than a mile or two.

The east access point is at Hollywood Southwind Cinema 12, 3433 Iowa. The trail extends all the way to Interstate 70 at the northwest corner of town, but Hecker says few people travel that far. Patrons also can access the South Lawrence Trafficway trail at the arboretum.

The best are the Thomas-Hunter Walking Trails at Lawrence Nature Park, Hecker said, referencing paths at the 100-acre park on Folks Road, about a mile north of Sixth Street.

It’s an unpaved, natural trail yet well-defined — with lots of ups and downs but nowhere you’d have to clamber over a boulder.

Scenery includes limestone outcroppings and a variety of trees and native grasses.

Other popular unpaved trails include the Riverfront Park trail east of the Kansas River and the half-mile urban trail that runs between Burcham Park, 200 Ind., and Constant Park, 230 W. Sixth St.

When it comes to more difficult trails, perhaps no one knows them better than members of the Lawrence Trail Hawks.

When he’s training for a 100-mile race, Gary Henry, 55, a founding member of the off-road running club, might spend up to 24 hours a week cruising the dirt paths around the Kansas River and Clinton Lake.

The Kansas River trails, with a trailhead at Eighth and Oak streets in North Lawrence, are relatively smooth and flat, Henry says. However, for that reason they also attract a number of inexperienced mountain bikers — who have, on occasion, collided with groups of runners.

“If you’re out there on foot … be careful of bicycle riders, because we share the trails,” Henry says.

The most technical trails are around Clinton Lake. The Trail Hawks use a trailhead near the Corps of Engineers building on North 1402 Road.

“They’re rocky and rooty, and you have to pay attention when you’re out on them,” Henry says, adding that despite trip hazards, “only the most experienced mountain bikers use them, and they know to watch out for walkers and runners.”

Safety on the trails

Run, walk or bike with a buddy.

“That is the best, number-one thing you can do is have somebody with you,” says Lawrence Police Officer Rob Neff, the department’s Neighborhood Resource Officer. “You’re always safer in pairs or a group.”

Neff says he’s aware of four crimes on the trails in recent years.

In June 2010, a man brutally beat and stabbed a woman who was bicycling alone between the YSI fields and the Clinton Lake Dam. Two runners interrupted the attack and likely saved the woman’s life, Neff said. William E. Nichols later was sentenced to 14 years in prison for the crime, after pleading guilty to aggravated battery, aggravated kidnapping and aggravated sexual battery.

In August 2009, a naked man tried to pull a teenage girl off her bike near the Eighth Street boat ramp in North Lawrence. The suspect, Gregory Curtis Way, pleaded guilty to one count of sexual battery and was sentenced to probation. Neff says the same man was suspected in two other reports about a naked man on the trails.

Neff says the girl was probably able to pull away from her attacker because she spotted him in time to speed up.

In addition to the buddy system, Neff offered these safety tips:

One of the last threats on the trails — especially wooded ones favored by the Trail Hawks — is wildlife.

Trail runners also have encountered copperhead snakes, which are poisonous but not known for being aggressive. Henry says your best bet is to carefully walk around them and continue enjoying your jaunt on the trails.