Michael Van Pelt can’t thank his fellow employees enough for the help they provided during his battle with head and neck cancer.

“I am still amazed at some of the things that happened,” he said. “You can imagine when a doctor tells you, ‘You have cancer,’ just everything stops, and you immediately worry about everything.”

The 61-year-old Eudora resident has worked at Lawrence Memorial Hospital as a lab courier for seven years. Every day, he makes about 40 stops to various Lawrence offices picking up specimens. During a recent break between routes, he talked about his battle with cancer that began in August 2011 with the diagnosis, and how his co-workers helped.

First, he said, they donated hundreds of hours of paid time off so he was still able to get a paycheck while he fought cancer for five months. He had surgery followed by chemotherapy and radiation treatments, and for three months he was on a feeding tube.

“If it had not been for that, my wife and I would have been in some financial trouble. We probably would have had to move, to tell you the truth,” he said. 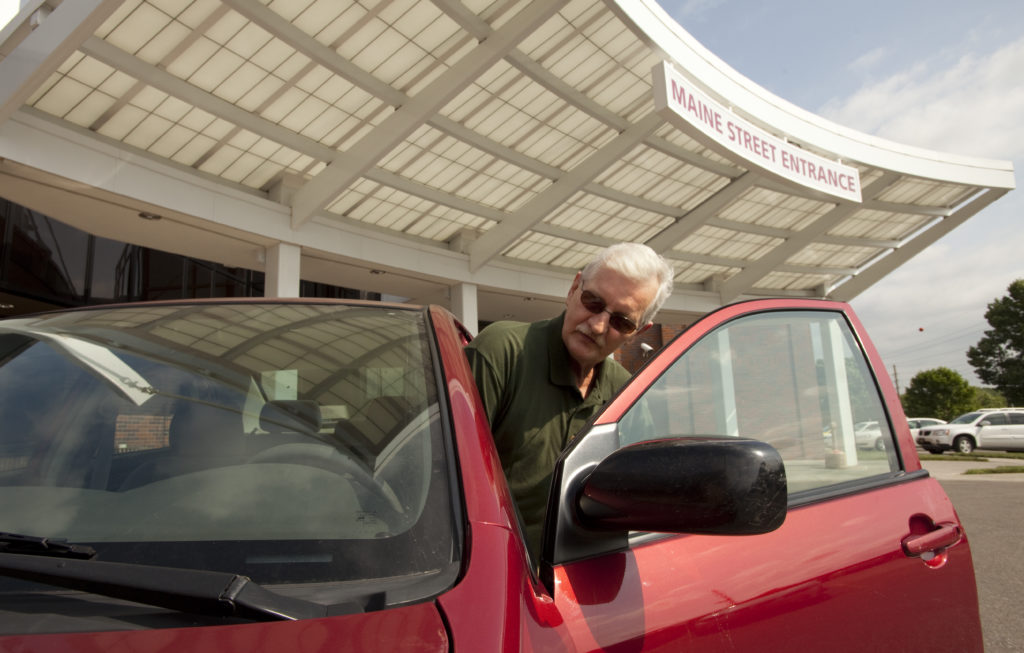 Michael Van Pelt, a lab courier for Lawrence Memorial Hospital, squeezes into his car after delivering samples from the Douglas County Jail to the LMH lab on Wednesday, May 2, 2012. Van Pelt was a beneficiary of the hospital's annual Employee Campaign when he was undergoing treatment for head and neck cancer.

Although they have health insurance, it didn’t cover everything, and so the bills starting mounting. Van Pelt said they were making monthly payments to about a half-dozen businesses, and then the hospital provided $700 for his medical costs.

‘We support each other’

The money was provided through LMH’s annual Employee Campaign, which began in 2002. It’s a campaign in which employees can give a one-time donation or have a certain amount of money taken out of each paycheck to help fellow employees or patients in need. Employees have donated $556,171 to the campaign since it began.

“I think a lot of it has to do with the culture here at LMH. Employees rally behind each other and we support each other,” said Sarah Smith, who helps promote the campaign as the LMH Endowment Association development specialist. It’s a four-week campaign that ends May 18.

“Before, we had situations in the hospital where an employee was faced with hard times and the employees that the person worked with on a regular basis would rally around and try to raise funds for them,” Smith said. “We would have separate fundraisers going on in different places for different people for different causes.”

If employees opt to participate in the campaign they can choose where they want the money to go. There are four funds:

• Crisis Assistance and Resources for Employees (CARE) Fund. This helps employees in crisis with items like utility and medical bills, car repairs and holiday meals. Those who have worked at LMH for six months or less can qualify for a maximum of $300 per year, and those who have worked more than one year, can get up to $700. Applications are submitted and a committee denies or approves the request. The committee doesn’t know anything about the employee, just the need. In 2011, 25 employees received assistance and 31 families received holiday meals, and it was worth a total $12,547.

• Employee Education Fund. It provides up to a maximum of $200 per year for employees to attend seminars, programs and conference as long as it pertains to their occupation. Last year, it helped 49 employees who received a total $9,202.

• Help and Healing Fund. It helps patients with medications or equipment when other community resources fail to meet their needs. Patients can qualify for up to $300 per year. In 2011, 140 patients received assistance worth a total $11,443.

• Patient Satisfaction Fund. This was introduced last year and aims to help patients through innovative ideas. For example, if an employee goes to a clinic and they see a program that would benefit LMH patients, they can submit the idea and then it goes to a committee who decides whether to fund it.

Kathy Clausing Willis, LMH vice president and chief development officer, said it wasn’t easy at first to convince employees to give to the campaign. “They were like, ‘I don’t want to give back to my employer,'” she said. The key was being transparent about where the money goes.

“We can’t take care of people if we are not taking care of ourselves,” Clausing Willis said.

“It’s a way of investing and retaining good people,” she said. “Years ago, companies took good care of their employees and so the employees were loyal to them forever. There was that trust. Somewhere in society, we have lost that.”

Debbie Carter, director of food and nutrition, describes her colleagues as family. She has worked at LMH for 40 years, working her way up from dishwasher. She said the LMH Employee Campaign helped pay for her mother’s funeral expenses. Her co-workers showed up with a $700 check for the funeral home during the visitation.

“It was a godsend for our family. It really helped during a trying time,” she said. “It made me feel they cared.”

And now she gives back, knowing that she can help others like Van Pelt, who is now cancer-free, regaining his strength and almost back to working full-time.

Van Pelt said in addition to help with his medical bills, LMH provided gift certificates for a holiday meal and gifts for his family although he had turned it down when they asked if he wanted the help. He said he appreciated the gesture but felt there were more deserving families, but LMH thought differently.

“That was something completely unexpected. That made it Christmas,” he said. 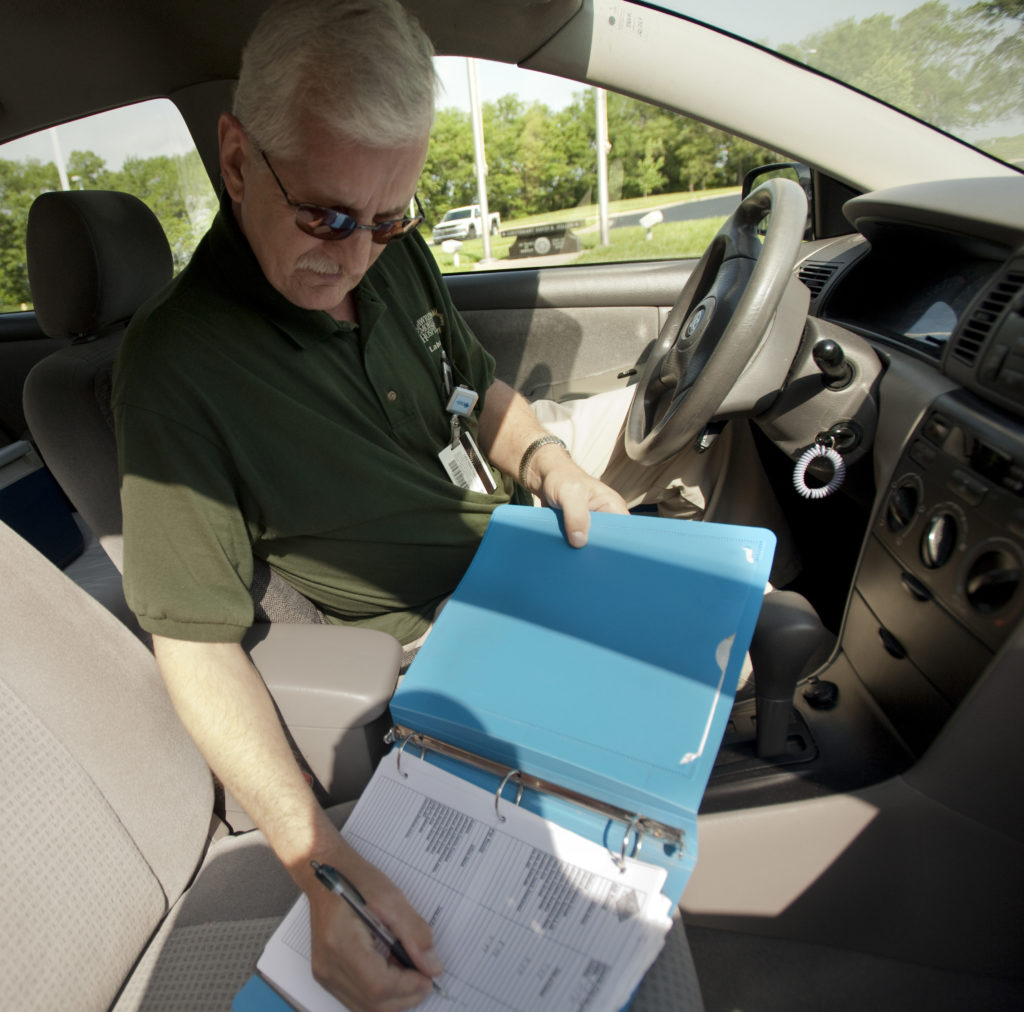 Michael Van Pelt, a Lawrence Memorial Hospital lab courier, records deliveries in his log book on his route, Wednesday, May 2, 2012. Van Pelt is grateful for the financial and emotional support he received from his colleagues while battling cancer last year. He received 00 from the annual LMH Employee Campaign in addition to gift certificates for a holiday meal and presents for his family.