Packard graveyard also home to a piece of Irish history 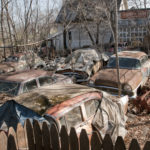 Massachusetts Street will be lined today with parade watchers hoping to catch a glimpse of Irish heritage this St. Patrick’s Day.

But back before crazy Sandbar floats, Shriners on three-wheelers or any other sight you may see in today’s 25th annual St. Patrick’s Day Parade, there was a Lawrence corner where a wee bit of the Irish spirit was on constant display.

At the southeast corner of 11th and Rhode Island streets, Rhody Delahunty set up shop in 1871 and soon became the Irishman who wandered in and out of countless Lawrence lives.

In short, if Lawrence residents ate meat near the turn of the century, Rhody and his “dray wagon” business at 11th and Rhode Island were likely responsible for delivering the meat to town.

“Apparently, he was a well-known man around town,” said Paul Caviness, a local historian who has researched Delahunty and the 11th and Rhode Island corner. “It appears he was the favored horse and wagon guy in town for basically every meat packer in the area.”

Now, Delahunty’s corner is no longer in favor, even on this most Irish of days. The property at 1106 R.I. has been in the news lately as an old graveyard for Packard automobiles. City officials report there are 15 Packard automobiles in the weeds and brush of the unkempt property. City commissioners have scheduled a May 15 hearing to determine whether the cars ought to be removed and the abandoned house and outbuildings torn down.

But the newfound attention has caused some Lawrence residents to remember what used to be. A Journal-World reader pointed the newspaper to a pair of old J-W articles that detailed the Delahunty story.

Rhody Delahunty — according to the J-W articles and Caviness’ 1989 written report — came to Lawrence from Kings County, Ireland, in 1867 to build what would become the Santa Fe Railroad line. But that work soon didn’t suit him, and by 1869 he had begun buying the property at 11th and Rhode Island to set up a wagon business. By 1871, he built the modest two-story house that sits on the property today and faces possible demolition.

Until he died in 1919, Delahunty used a team of horses stabled at 11th and Rhode Island to pull a heavy-duty wagon throughout the area. Among his more famous clients: Gen. John Fraser, who built what became known as Old Fraser Hall atop Mount Oread. Delahunty was Fraser’s horse and wagon man of choice, according to Caviness’ history report.

The story goes that Rhody Delahunty was a true Irishman in that he had a great love of horses and their power. Apparently, though, his son Tom was a bit more Americanized. Tom took over the business when his father died, and one of his first purchases was a brand new 1919 Diamond T truck.

Tom Delahunty boasted in a 1964 Journal-World article that “it was the first big truck in Lawrence.” Caviness, though, said that claim comes with a dispute. When Caviness re-reported that claim in his 1989 report, members of Lawrence’s Hetzel family said they also operated a hauling business during that era and had a “big truck” in 1916.

“I caught some heat about that one,” Caviness said.

Regardless, the Delahunty Diamond T was a bit of a celebrity around town.

“At the most, there were only a couple of trucks in town, and Delahunty’s was painted like a circus truck,” Caviness said.

Delahunty had a Kansas City builder of circus wagons construct a special body for the truck, complete with gold circus-like lettering on the side.

The truck body even was built so that it could include rows of seats in the back to serve as an “improbable limousine” to carry families to funerals. The truck also served as a makeshift bus to transport visiting athletic teams to Kansas University’s McCook Field, Caviness’ research found.

The truck is not among the vehicles in the weeds at the site today. The truck was sold in late 1964 to Lawrence businessman Travis Glass, who operated LRM Industries. Steve Glass, a son of Travis’, said his father had it fully restored. The family sold the truck to a collector in Oklahoma following Travis’ death. Steve said he still occasionally gets calls from people asking about the whereabouts of the truck.

“What I remember most is we had our shop in North Lawrence, and we had a lot of expensive equipment for the business there,” Glass said. “But the truck would always be inside the building because that was more valuable in his mind than the modern equipment we had.”

Members of the city’s Historic Resources Commission — and ultimately city commissioners — will get to decide how valuable the history is at the 11th and Rhode Island site. The Historic Resources Commission will render an opinion about whether the old structures — in addition to the house, there are several outbuildings that Caviness dates to the 1920s period — should be torn down. City commissioners will have the final say on the matter.

Caviness said city officials will have a tough job.

“I see the city’s point,” Caviness said. “It is basically a salvage yard today, in an area that is no longer designed to have a salvage yard.”

The Raymond Barland Family purchased the property in the mid-1960s. Barland was the owner of the Packard dealership in downtown Lawrence, until the brand dissolved in the 1950s. But Barland, Caviness said, used the 11th and Rhode Island property to sell used Packard parts for many years. One of Barland’s sons remains in Lawrence, but he has not returned phone calls from the Journal-World regarding the property.

As for whether the property is just a reminder of an interesting time in Lawrence or whether it is a historic site, is a matter that may get some debate at City Hall. Caviness said the issue is such a subjective one that disagreement is certain.

“I hold that it is a significant piece of property because of the ethnic history of the neighborhood,” said Caviness. “I would be sad to see it go.”