Puree excitement: Parents baby their little ones with homemade food 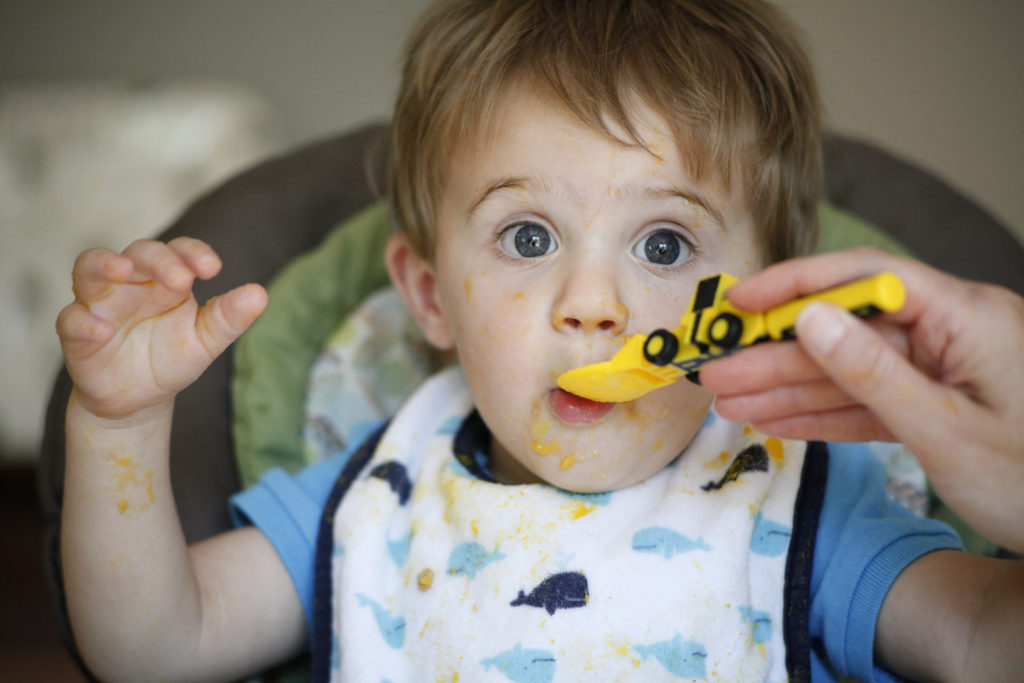 Camden Hobbs, 18 months, gets wide-eyed as he takes another bite of pureed squash during lunch on Thursday in his Lawrence home.

Here are some suggestions for homemade baby food from local parents: 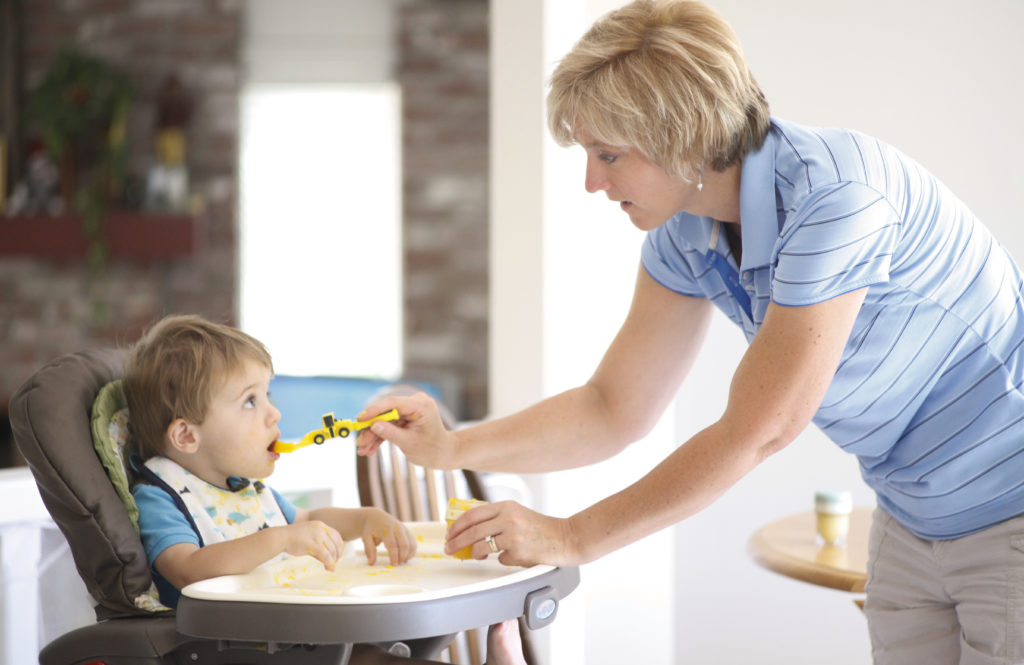 Christina Hobbs coaxes in another bite for her son Camden, 18 months, by way of a dump truck spoon on Thursday in their Lawrence home. Hobbs makes all of Camden’s food. 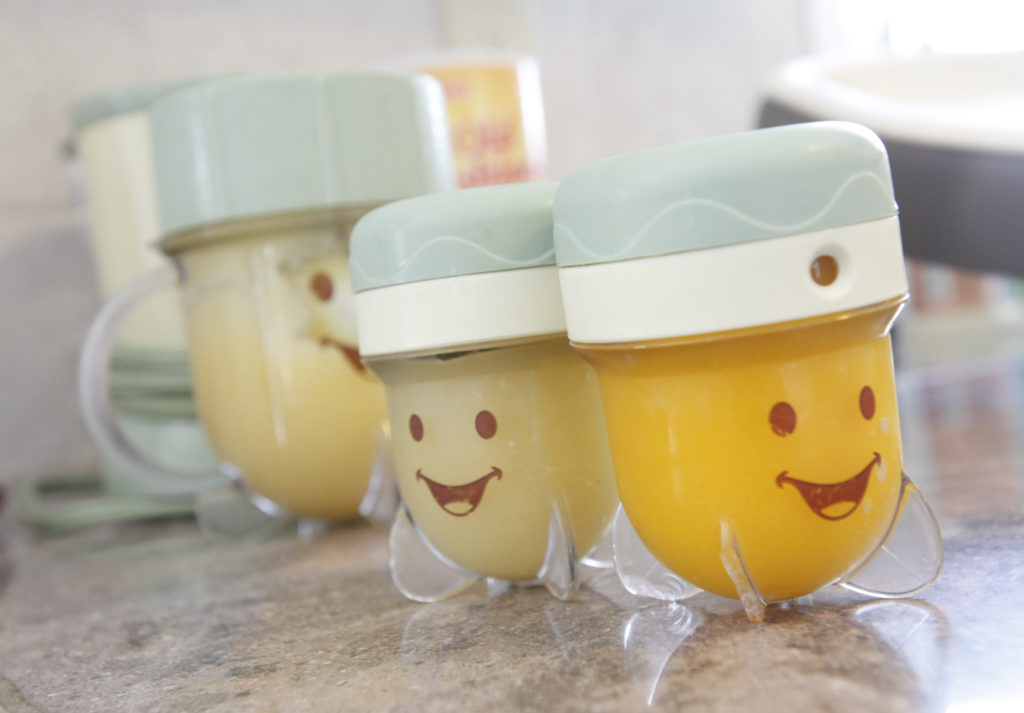 To prepare her son Camden’s food, Christina Hobbs uses the Baby Bullet for pureeing, which comes with storage jars.

Baby Bullet food processor (made by the company that makes the Magic Bullet): Purees food and includes storage jars and includes recipe book. A steamer is sold separately. $60-$80

Beaba Babycook Baby Food Maker: Steams and purees food all in one and includes recipe book. Also can be used to reheat or defrost food. $110-120

Some local babies may never recognize the Gerber baby face. That’s because their baby food doesn’t come from a jar — instead, it comes from their own kitchens.

Parents say they make their own baby food for many reasons, including saving money, maximizing nutrition or avoiding allergens. Regardless of why, all local parents agree on one thing: It’s easy.

“If you’re preparing food for your family, you always have a little left to make for your little one,” says Marsha Stetler, food program home visitor with the Douglas County Child Development Association. “And it is easy to prepare and easy to store.”

Christina Hobbs has made food for her son, Camden, 18 months, since he started on solid food last summer.

“I have lost 45 to 50 pounds, and I don’t eat any food that is processed. I decided that if I don’t eat processed food, then I’m not going to feed it to my baby, either,” Hobbs says. “I’ve never given him a bite of anything I didn’t taste myself.”

Kristen Walker’s son, Gunner, 19 months, has always had homemade food because it is cheaper than the jars, even when they are on sale. Walker says many of the foods she made were 25 cents per serving or less, compared with at least 50 cents per serving of the jar food.

“My husband is an extremely picky eater, so we also hoped the homemade food wouldn’t make him picky,” Walker says. “Now, he pretty much eats whatever we put in front of him.”

Hobbs says she knew she was doing the right thing when she made her very first batch of food for Camden.

“I made carrots for the baby, and I also had a jar of carrots. I looked at the color compared to the jar — mine were fluorescent orange, compared to the ones in the jar, which were brownish orange,” she says. “I didn’t know what went into the jar to make it that color.”

Bridget Dixon makes baby food for her 7-month-old son, Quincy, and sends it to his child care with him while she works so she can be confident she knows what he is eating each day. She says even though she has two children and works full-time, making the food is much easier than she thought it would be.

“Some people think I’m way more crafty and Martha Stewart than I actually am,” Dixon says. “If there was too much work involved, I wouldn’t be doing it.”

Stetler, from the Douglas County Child Development Association, visits home day cares as part of her job and says some child care providers make baby food for all of the children they care for in their homes. Dixon sends food with Quincy once or twice a week and has it stored in the freezer where he goes.

Hobbs, Walker and Dixon each have different approaches — and different kitchen tools — they have used to make the food.

Hobbs uses a pressure cooker to steam the vegetables, then purees them in the Baby Bullet, a food processor designed especially for making and storing baby food.

She has frozen the food in ice-cube-tray-sized portions and also uses the storage jars that came with the Baby Bullet.

“I’m a multitasker: I would put 2 sweet potatoes in the pressure cooker, and in the time it took me to unload and load the dishwasher, they’d be cooked,” Hobbs says. She insists she is not a “gadget person,” but the Baby Bullet makes the food just the right consistency.

Walker has different preparation methods, depending on the food. She smashes cooked sweet potatoes and acorn squash to the right consistency. She found that peas worked best in the blender, and she puts other foods in the food processor.

As Gunner got older, Walker bought rotisserie chicken from the grocery store, cut off the breast meat, added some liquid and pureed it in the food processor. Over time, she gradually added herbs and spices to both vegetables and meat for flavor, careful to avoid salt and known allergens.

She used four-ounce plastic storage containers to divide the food into serving portions and freeze it until she was ready to use it.

Dixon uses the Beaba Babycook Baby Food Maker that a friend loaned her. It both steams and purees the food. She sorts it into ice-cube trays to freeze it, then sends the ice cubes to child care in a sealed baggie.

All three parents say that preparing the baby food themselves has just become part of the routine and makes the baby’s meals similar to their own.

“You can craft it to whatever your family does. It’s not intimidating at all,” Walker says.

Hobbs says she hopes that this nutritious, home-cooked food will set the tone for Camden’s meals with the family in the future.

“I refuse to be a short-order cook in my own house,” Hobbs says. “I am trying to keep the family eating the same things.”