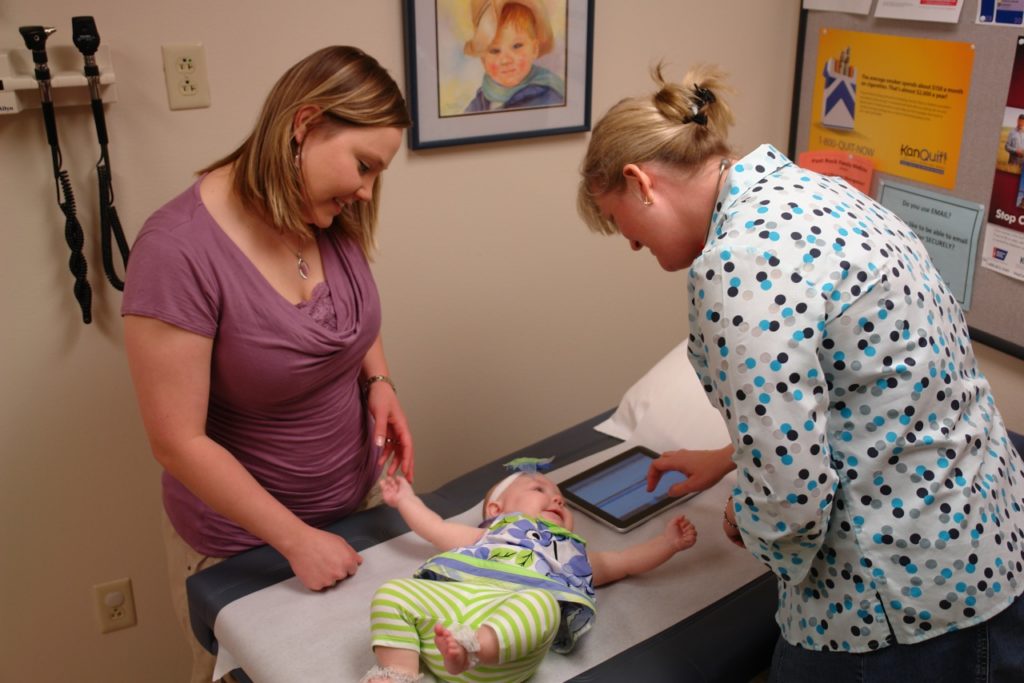 Dr. Jennifer Brull, right, uses an electronic health record system to record her patients’ health information via a tablet computer that goes with her wherever she is administering care. With the statewide health information exchange, which goes live July 1, she will be able to access records that her patients have at other facilities connected to the exchange, such as other hospitals, specialists or laboratories.

Starting June 1, patients of Kansas health care providers who are connected to the new statewide network will receive privacy notices telling them that their health records may be shared electronically, under the same legal protection that currently applies to their paper-based health records. People who don’t want their records to be available on the network must mail in an “opt-out” form, which is available at the website KHIE.org.

Brull, herself a physician, was helping him collect everything he needed, including his most recent laboratory and scan results. Then she learned that one set of her father’s X-rays were at a hospital four hours away.

“We had to drive to pick them up,” she said, recalling the incident, which occurred earlier this spring. “It was a real pain in the butt. You know, it’s during a stressful time, and we were dealing with a bunch of other things. This was just one more thing that we have to deal with, something that should have been easy. There’s no reason in this day and age that we shouldn’t have been able to accomplish that electronically.”

Brull, who practices family medicine in Plainville, about 25 miles north of Hays, is a national leader in adopting electronic health records.

It isn’t the technology itself that is the barrier to more medical providers exchanging electronic records, she said, but the lack of a secure network to transmit them without risking patient privacy.

“We said, ‘Just email it — it’s fine; we’ll sign a waiver.’ They said they just couldn’t do it,” Brull recalled of the hospital’s refusal to transmit her father’s X-ray records and spare the family the long drive.

The statewide health information exchange is scheduled to go live July 1, allowing medical providers registered with the network to share and search for patient records. 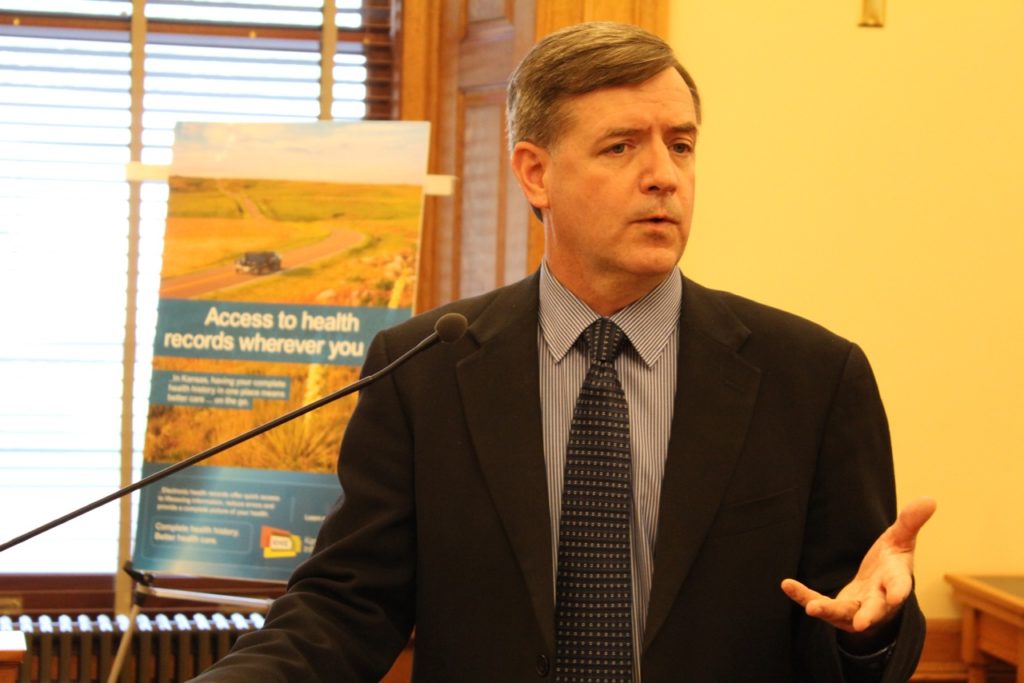 Dr. Robert Moser, secretary of the Kansas Department of Health and Environment, announcing the new statewide health information exchange last week at the Statehouse. Moser is a member of the exchange's quasi-public regulatory body, the Kansas Health Information Exchange.

Dr. Robert Moser, secretary of the Kansas Department of Health and Environment, said the exchange would safeguard patient privacy.

“We can assure patients that this information will be secure and safe and only available to those providers that need it, and at the time they need it,” he said.

Patient information available on the network at first will be limited to demographics, medications, allergies, lab results and medical history, including diagnoses, procedures, surgeries and immunizations. But officials at the Kansas Health Information Exchange Inc. predict the system will grow to include more kinds of information, such as a doctor’s notes or dictation recordings.

Substance-abuse data will not be available on the network unless explicitly authorized by a patient.

About a third of Kansas patients receive care from a provider who is or will be connected to the exchange in the near future, officials said.

As it is more widely adopted, health information exchange, or HIE, will take the place of paper records, which are typically transferred via fax, discs, mail or by patients themselves. And quicker access to more complete patient information should translate into benefits for patients.

“Right now we wait sometimes a month or more to get records,” Brull said. “That time delay certainly impacts how you provide care to that patient.”

She said the current paper system relies heavily on the patient to relay information from one care provider to the next. But too often, patients don’t know exactly what was done or learned by another provider.

“If you know real information, you’re a lot less likely to order another test,” Brull said. “That’s what the free exchange of information gets you — you’ve helped the patient and eliminated costs.”

From paper to iPad

The conversion from paper to electronic records will take years to be fully realized, experts say.

At the U.S. Department of Veterans Affairs, regional health information exchange began around 2002. Only recently have all of the VA’s 153 medical facilities nationwide become fully connected on a secure network, said Jim Gleisberg, a spokesman for the VA’s Eastern Kansas Health Care System.

“Now we can have a veteran from Kansas go on vacation in Florida, and if he has a problem and goes to the VA in Florida, they can pull up his health records,” Gleisberg said. “But it took a while to get where we are today. It took at least 10 years to get fully there.”

Most states have at least some regional exchange of medical information. But only about six states have attempted a full statewide exchange like Kansas, according to KDHE’s Aaron Dunkel, who is the state’s liaison with the federal health information exchange agency.

Jerry Slaughter, executive director of the Kansas Medical Society, said the further step of interconnecting state networks is a major challenge to realizing the full benefits of digital health records.

“They are just now beginning to tackle standardized interfaces at the national level,” Slaughter said. “July 1 is not an end, it’s just the beginning.”

In the new Kansas system, access to medical records on the network will be restricted to providers who have a patient’s permission and are providing care to the patient. Insurance companies and the federal Medicare and Medicaid programs will have access to records of patients they cover but only the information directly related to determining coverage and billing.

The privacy standards set in the Health Insurance Portability and Accountability Act, the federal law known as HIPAA, will apply to electronic medical records just as they do to those on paper.

It will be the job of the Kansas Health Information Exchange, or KHIE, to enforce the standards of the statewide network.

KHIE is a quasi-public regulatory body. Its 15-member board includes representatives of patients, doctors, hospitals and insurance companies. Brull, Moser and Slaughter are members of its board.

KHIE board members have been working for several years to put in place the policies needed to oversee the privately owned networks that will be the technical backbone for the statewide exchange.

In April, KHIE sanctioned two networks: the Kansas Health Information Network, or KHIN, and the Missouri-based LACIE. Other networks may apply to join the exchange, but so far none have expressed intention do so, KHIE officials said.

After June 1, patients of providers on the network health will have their records automatically entered into the new system.

Those who don’t want their records included must mail in an “opt-out” form, which is available on KHIE.org. They will be informed of the opt-out form at their doctor’s office or the hospital but may not necessarily be provided the form there.

For now, opting out is all or nothing, meaning that those who opt out may not have their records selectively available over the network in the case of emergencies or other special circumstances.

Bill Wallace, KHIE chief executive, said that based on the experience of Nebraska’s exchange, which started in 2009, about 3 percent of Kansas patients likely would choose the opt-out.

That could mean the exchange will receive as many as 55,000 opt-out requests in the first month of operation. By the end of the network’s third year, the number of Kansans opting out is projected to be about 81,000.