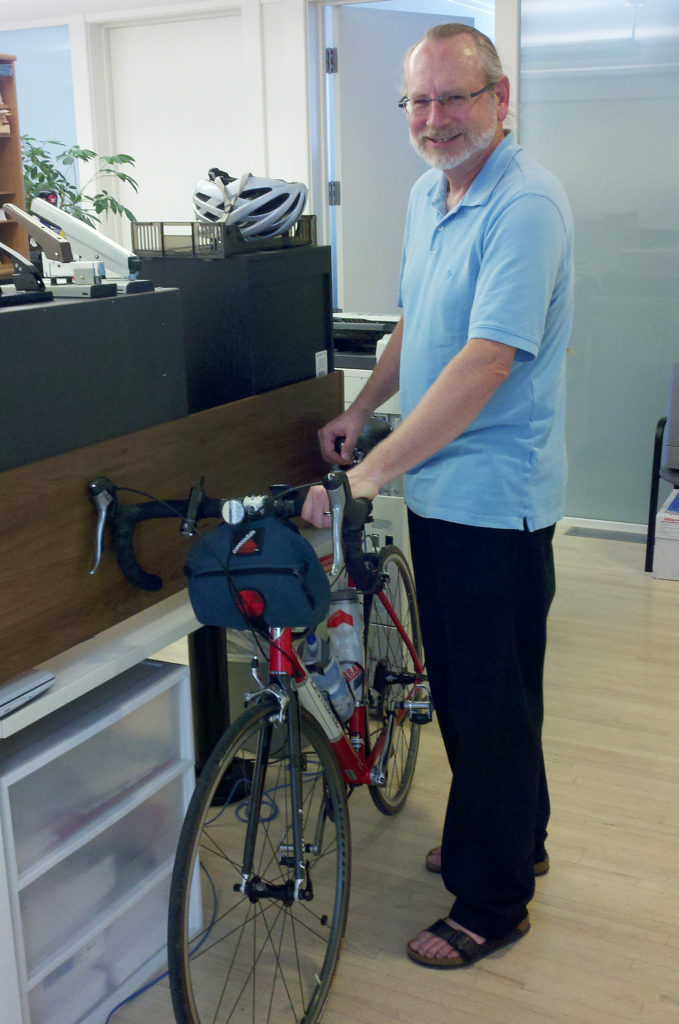 David Brown, Lawrence, plans to participate in Biking Across Kansas in June. Brown, an attorney with offices at 1040 N.H., says riding to work and home helps him squeeze workouts into his busy schedule. He's doing the ride to improve his health and to celebrate his 60th birthday, coming up in August.

On a nice day a few years ago, as his wife headed out on an errand, David Brown made a decision on a whim: He’d just hop on his bike and meet her over at the shopping center.

“I thought I was going to die,” Brown said. Later, he learned how far he’d ridden — less than a mile.

Brown has since bicycled across Kansas and is preparing for his second attempt. He’s one of more than a dozen Lawrence residents signed up for this year’s Biking Across Kansas ride, a 475-mile trek from Colorado to Missouri starting Saturday and finishing June 16.

The annual ride draws up to 800 participants of all ages and ability levels, and reasons for signing up run the gamut. Lawrence participants include less-than-avid cyclists as well as longtime veterans of the ride.

For Brown, health was a factor.

He isn’t a smoker and said he’s never had weight problems despite leading a “very sedentary” life. As a busy attorney, he said, there may be weeks where the only exercise he gets is climbing the stairs to the clerk’s office at court.

“When that’s all you do,” he said, “you don’t notice whether you’re fit or not.”

After his ride to the shopping center, Brown realized he most certainly was not.

But he’s always hated exercise. Loathed it. Those endorphin rushes everyone talks about?

“That never happens for me,” Brown said.

He knew he’d need a goal in order to stick to a regimen, and at the suggestion of his masseuse, Biking Across Kansas became that goal.

Before the 2008 ride, which he completed with his teenage son, Brown trained for more than a year, supplementing bike rides with personal training sessions in the gym. Though his son, now a Marine stationed in California, can’t join him this year, Brown is tackling the ride again.

His upcoming 60th birthday ties into his inspiration.

“My brain seems to be working just fine,” Brown said. “I want the rest of my body to keep up with that.”

Brown knows Biking Across Kansas was good for him, but, honestly, he found the experience exhausting and not particularly pleasant. 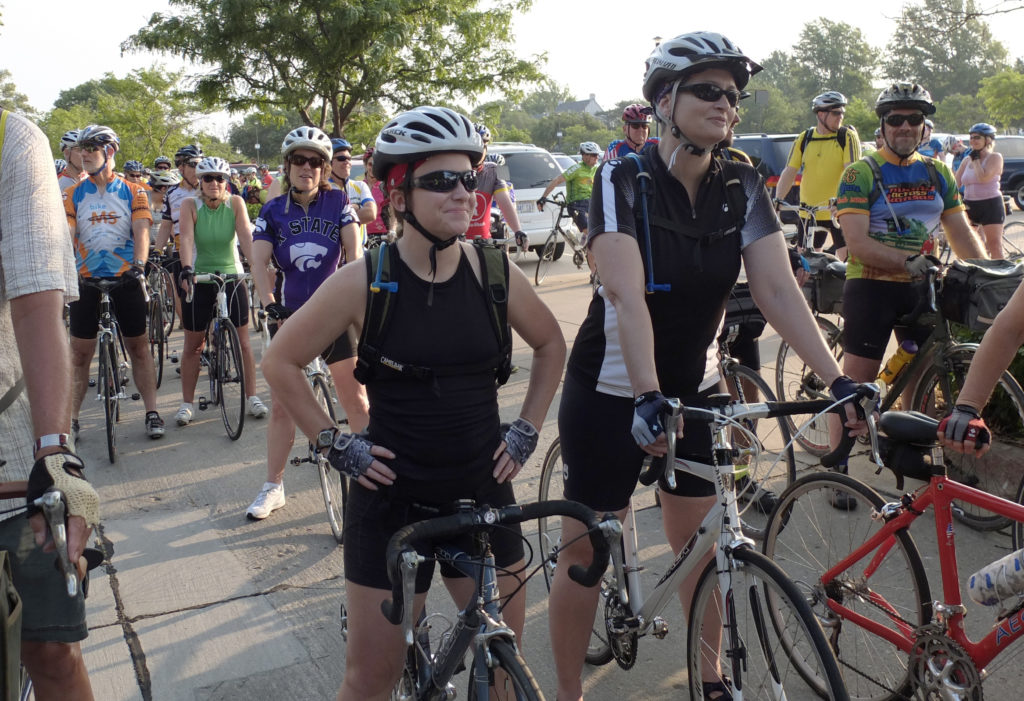 From left in foreground, friends Lexy Quandt, Council Bluffs, Iowa, and Lisa Rasor, Lawrence, wait with 300 other bicyclists for the start of the 36th annual three-day Cottonwood 200 ride May 26. Like many cyclists, Rasor and Quandt use the Cottonwood ride to prepare for the 8-day, 475-mile Biking Across Kansas, which they will participate in June 9-16.

Lawrence resident Lisa Rasor, on the other hand, finds Biking Across Kansas a fantastic vacation.

Rasor, 46, a legal assistant at a law firm, has done the ride 14 times and plans to participate again this month.

“For a whole week, I don’t know what’s going on in the world, and I don’t care. All you do is bike, and you eat, and you sleep, and it’s relaxing,” she said. “I know people don’t believe that because it’s very physically taxing, but it is relaxing.”

Rasor has been bicycling since 1995, when a friend talked her into joining her MS150 team.

As long as you enjoy bicycling and train to where you can ride at least 50 miles at a time, you can do Biking Across Kansas, she said. Having a friend or two on the ride helps, too, she said. 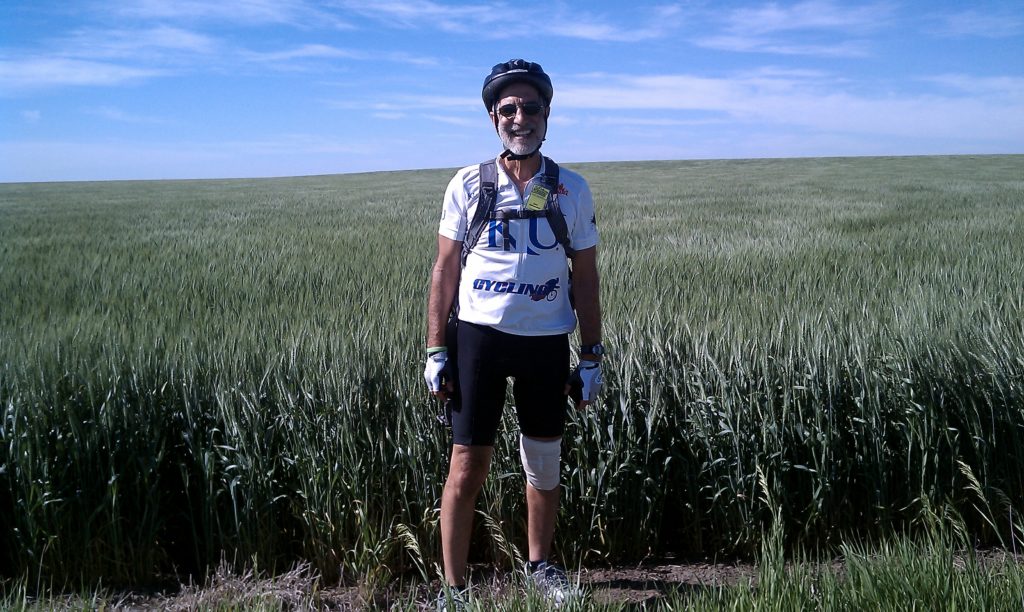 Former Lawrence mayor John Nalbandian stands next to a field en route to Colby during his previous trip with Biking Across Kansas in 2010. He plans to take part in the ride again this summer. 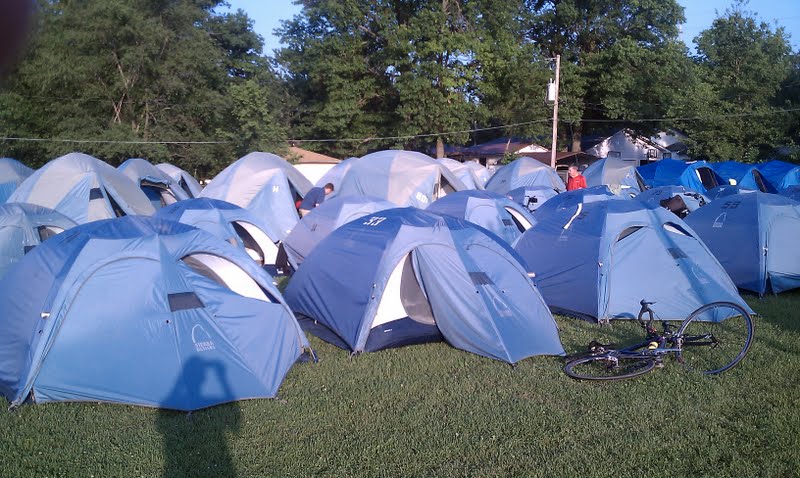 Biking Across Kansas participants set up camp in Osage City on the 2010 ride.

John Nalbandian, 68, completed his first Biking Across Kansas in 2010 with friend Ray Hummert. The Lawrence residents work together at Kansas University’s department of public administration.

On Day 1 of that ride, Nalbandian’s journal entry included this: “I really want a physical accomplishment I can be proud of. Getting too arthritic for much running anymore, and I am not going to swim competitively. I can play golf and still get better, but I am looking for something more physical — requiring endurance. This is it. We will see.”

It took mounds of ibuprofen, Nalbandian wrote. And he and the other riders endured rain, hail, knotted muscles and saddle-soreness no strategy could cure.

But through the huffing and puffing, they saw a lot of scenery.

Stately old homes in Minneapolis. Live music and a performance by the high school cheer squad in Herrington. The town of Hoxie, where Nalbandian surmised the local Chinese restaurant had never been as busy as the Sunday that Biking Across Kansas rolled through town. And Hunter, where probably 100 of the town’s 400 people volunteered to serve lunch and homemade pie to the cyclists.

“In some cases, you’re going through towns that have fewer people than on the bike ride,” Nalbandian said. “And everybody is so nice.”

This year, Nalbandian looks forward to finishing again and seeing new places along the way.