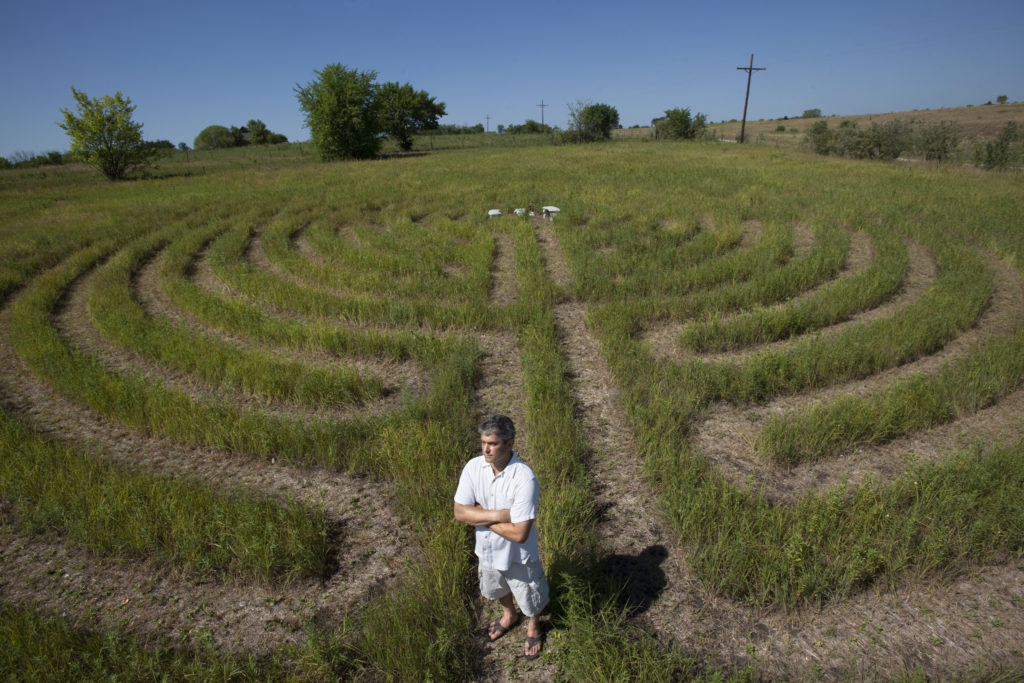 David Bartholomew is pictured before a labyrinth created he created with his wife, Joan Clark, at 1661 E. 400 Road, west of Lawrence. Bartholomew hopes the labyrinth will be used as a place of meditation.

The LunaBella Labyrinth is at 1661 E. 400 Road, west of Lawrence, and is open from sunrise to 8 p.m. weekdays and from sunrise to 5 p.m. on weekends. At-will donations are accepted.

Owners advise that bees are kept in the area. 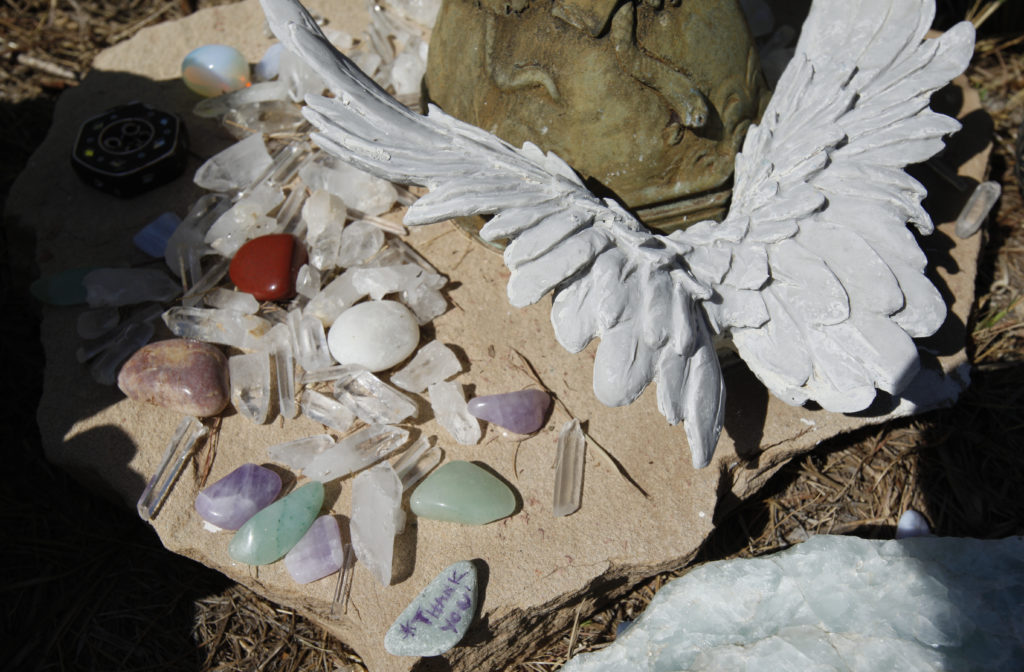 Various objects rest on a stone in the center of the LunaBella Labyrinth. Bartholomew explained that often, a visitor will bring an item, such as a stone, with them as they walk a labyrinth and lay it in the center to symbolize anything they are willing to let go of.

It’s an installation art piece, a portion of stewarded land, a sacred space for reflection and meditation. Call it what you like, but more than anything, its creator says, it’s a metaphor for life: Put one foot in front of the other, accept that there will be twists and turns, and you’ll eventually get to where you’re going.

David Bartholomew built what he calls the LunaBella Labyrinth on his land, about 10 minutes west of Lawrence in Kanwaka, in May. Since then, he says, about 100 people have come through to pray, open themselves up to spiritual growth, or just enjoy three-eighths of a mile of exercise.

The labyrinth is mowed out of prairie grass, and it joins another feature outside his house: a cutout of his wife’s name, Joan, that’s visible in Google Earth. The circular labyrinth — it’s in the form of what’s called an 11th circuit or Chartres design — is meant to be a gift to more than just his wife.

“It comes from a place of wanting to show gratitude for what we have,” he said. “Of wanting to give people a space for a prayer walk, a sanctuary that’s welcome and safe.”

Bartholomew, a stunts and lights coordinator in the film industry, cuts a path as wide as his push mower and maintains it with weeding that he says is also like a physical-made-spiritual process. The path isn’t a maze, meant to trip up the walker in false starts and a competitive reach for a destination, but rather a journey. For the walker, it’s a few quiet moments that can be spent to get clarity or peace.

“A person has taken an action of power to come here and open up to the universe,” he said. “It can be subtle or profound — maybe so subtle you don’t realize it for some time — but it works to create an opportunity to listen and grow.”

It’s meant to be an ecumenical experience, and Bartholomew is open to all beliefs. He’s adopted a mantra of a favorite space in Los Angeles, where he lived before and after living here in the Midwest: Honor the wisdom of all traditions. He’s been around spiritual centers of all stripes in Lawrence to spread the word of his space.

Joan Clark, an aromatherapist who lives on the land with Bartholomew, their two dogs and two cats, says that they generally ask visitors not to disturb them in their house, but often walkers just want to share a bit of gratitude or a moving experience.

“People say after they’ve walked it that they have a sense of coming home to themselves,” she said.

The labyrinth experience is about moving forward with mindfulness — letting go of weights and stresses on the way to the middle and then on the way back out, receiving calm, spiritual guidance or whatever the walker’s looking for.

“That’s what it’s about — you get anything you want from it, but it’s about letting go,” she said. “People say, ‘Wow, I felt so peaceful now. How do I keep feeling that?'”

The walk through the labyrinth, it seems, may just as easily cause an epiphany or a few moments’ enjoyment in nature and the sun. Regardless, you can take the time to put one foot in front of the other and, if nothing else, find a little peace.