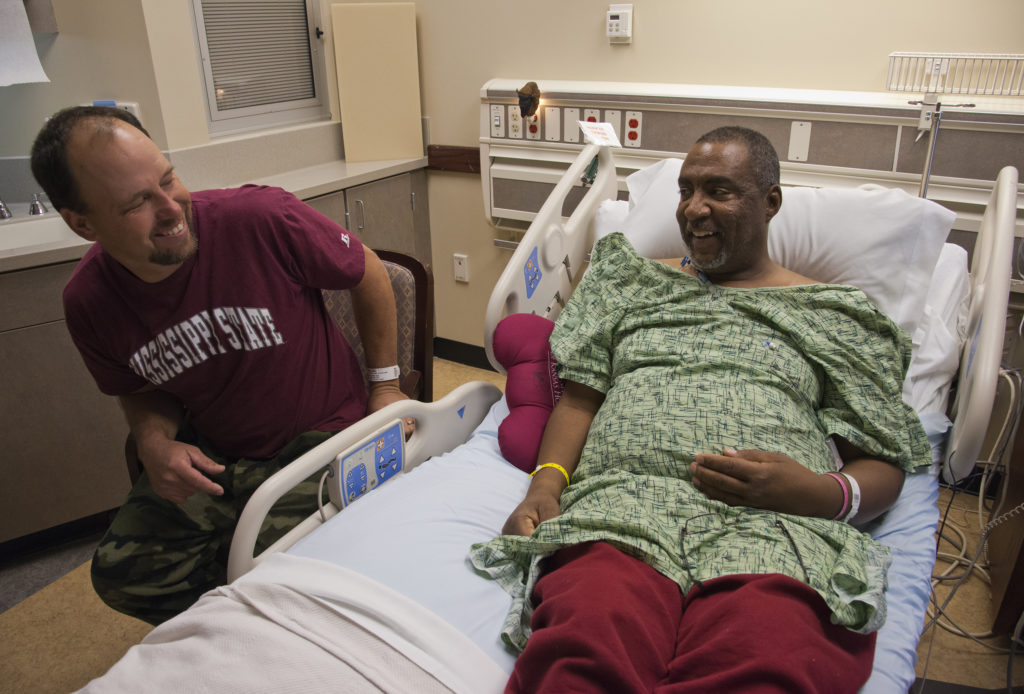 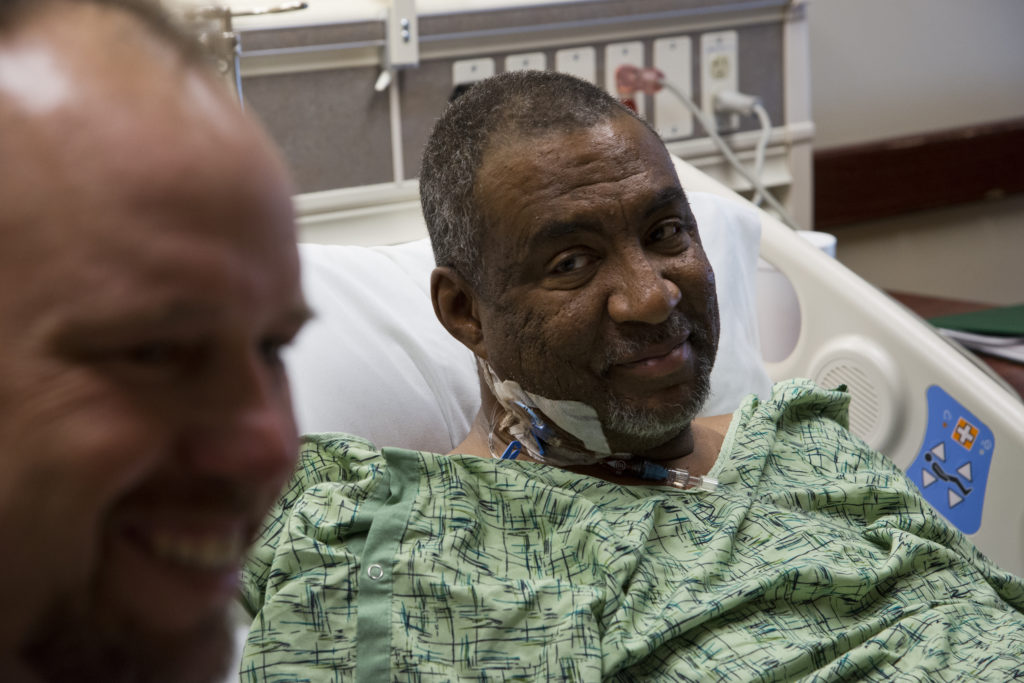 As Gillan Alexander sat in his northwestern Kansas farmhouse about year ago and he thought about the man from Mississippi sleeping in a tent outside, a verse from the Bible came to his mind.

It was Hebrews 13:2, and in his recollection it goes something like this: “Be careful in your treatment of strangers. You never know when you’ll entertain angels unawares.”

After his black Labrador, Tug, tore up that man’s tent because he smelled some bread inside, Alexander invited him inside his house. He’d met the man, one of several he welcomes to his property to come hunt from time to time, about four years before. His name was Rob Robinson. He was a firefighter from outside of Starkville, Miss.

Last Thursday at Kansas University Hospital, the two bumped fists as Robinson sat next to Alexander’s hospital bed. The man from Mississippi was getting ready to check out and head home, three days after he gave Alexander a kidney.

It was five years ago when Rob Robinson first knocked on Gillan Alexander’s door in Nicodemus, about 50 miles northwest of Hays.

He’d driven the 1,000 or so miles from his Mississippi home in pursuit of the Rio Grande turkey, one of four species hunters must bag to achieve a feat the National Wild Turkey Federation calls a Grand Slam.

“Your love and your passion can take you wherever,” Robinson said Thursday.

Robinson’s passion is hunting. When he came to Alexander’s farm, he’d recently taken up turkey hunting after years of chasing deer. His job as a firefighter provided him a healthy amount of time off, allowing for the lengthy trips required to chase a Grand Slam.

A friend of Robinson’s in Olathe, whom he’d met through his sister who also lives there, took him to the area around Alexander’s farm, saying it was a good spot to find a Rio Grande.

People had been hunting on Alexander’s farm, which has been handed down through four generations of his family now, for decades. So when Robinson knocked on the door of the farmhouse where Alexander lives alone, seeking permission to hunt, Alexander said sure.

Robinson ended up getting his Rio on another piece of property in the area. But he found he loved the country out there, as well as the people who were so friendly they’re glad to let a stranger stay on their property and do some hunting. So he continued to make the drive when he could.

“Everybody down home, they get tired of me talking about Kansas,” Robinson said.

When he came out a year after his first visit and knocked on the door again, Alexander says, he remembered the man from Mississippi from the year before but couldn’t recall his name.

In November of last year, Robinson was back, and he knocked again on the door. He saw Alexander hooked up to a dialysis machine.

About 20 years before, a doctor had told Alexander had a kidney disease that would likely one day cause him to require dialysis and a transplant. That time had come about four months before, and now this is what he did for about four hours, six days per week.

“These guys are out having a good time, and I’m stuck in a chair doing dialysis,” Alexander, 55, said Thursday. “That’s kind of frustrating.”

He also made drives to Salina, about five hours round trip, at least monthly to see his nephrologist. All while continuing to farm wheat, sorghum and soybeans largely on his own (with help from neighbors and his nearby sister).

This was the first Robinson had heard about the situation. But then, Alexander hadn’t gone out of his way to tell anyone.

“I had a lot of people say, ‘Well, you ought to go on Facebook and, you know, put it out there that you need a kidney,’ and all that,” Alexander said. “And I said, ‘Nah, that’s just not me.'”

Like a lot of country folks, he says, he’s not the best at asking for help.

That day last fall, the two talked for about an hour (“just about everything,” Robinson says) before Robinson set up a tent outside and prepared for a few days of hunting.

Inside his house, Alexander thought of Hebrews 13:2 and strangers and angels.

After a few days, Alexander’s dog ripped apart Robinson’s tent. He felt guilty and invited Robinson in to stay. (Robinson says it was his fault for leaving bread in the tent.)

When Robinson came back to hunt in the spring, he skipped the tent and stayed inside. They talked more about Alexander’s dialysis treatments.

They went out to a Mexican restaurant in Hill City with Alexander’s cousin. The cousin asked how he could check to see if he’d be able to donate him a kidney. And Robinson started thinking.

After Robinson drove back home, he and Alexander began sending text messages back and forth every day. The farmer and the hunter shared a habit of rising early, so they exchanged texts at 5 a.m. when all else was quiet.

“My day’s not right until I hear from him,” Alexander said.

Robinson would check on the weather in Kansas, which fascinated him, and on how Alexander was doing.

After a “spiritual experience” while he was on another hunting trip in Nebraska, Robinson decided he would check to see if he could help. He waited until after Alexander underwent surgery in June on his heart, weakened now by about a year of dialysis, so that he’d be cleared to receive a transplant.

After the surgery, he sent off some blood work to Kansas City. The word came back that he was a match.

Alexander said that, to his knowledge, Robinson was the first person to get to that point in the kidney donation process.

“I really wasn’t aware that he was going through with it, I guess,” Alexander said.

By donating his kidney, Robinson likely provided Alexander with an organ that will last three to five years longer than one received from a deceased donor, said Sean Kumer, the KU Hospital surgeon who removed Robinson’s kidney last Monday. The donation also saved Alexander’s body from additional wear and tear from continuing to undergo dialysis, Kumer said. The average Kansan in need of a kidney usually waits for two to two-and-a-half years.

“I remember that day,” Robinson said. “Gil had been feeling down, and he just felt tired of dialysis and tired of waiting on a donor. And, you know, I text him that I was a match, and he ended up calling me, and he was all shaken up.”

Robinson, 43, and his wife, Sharon, came up to Kansas City a few weeks ago for preliminary procedures, and they ate Thanksgiving dinner with 50 to 60 of Alexander’s family and their friends in Kansas City, Kan.

They’ll be coming back for Thanksgiving next year, she said, bringing her three children with them.

Doctors said the transplant Monday went smoothly, and Alexander says he feels like a new man. (Pre-screening for the transplant also revealed a cancerous cell in his pancreas, which doctors removed; Alexander says the kidney disease, in a way, may have saved his life.) He’s ready to start traveling again as he used to.

Sharon says it’s divine intervention that the two became friends, and they agree.

Alexander says he thinks he was meant to learn from this how to better accept help from others, maybe even ask for it.

In this case, though, all he had to do was let a stranger come in the front door.