Nuclear war to Civil War: Tourism leader has seen city through it all 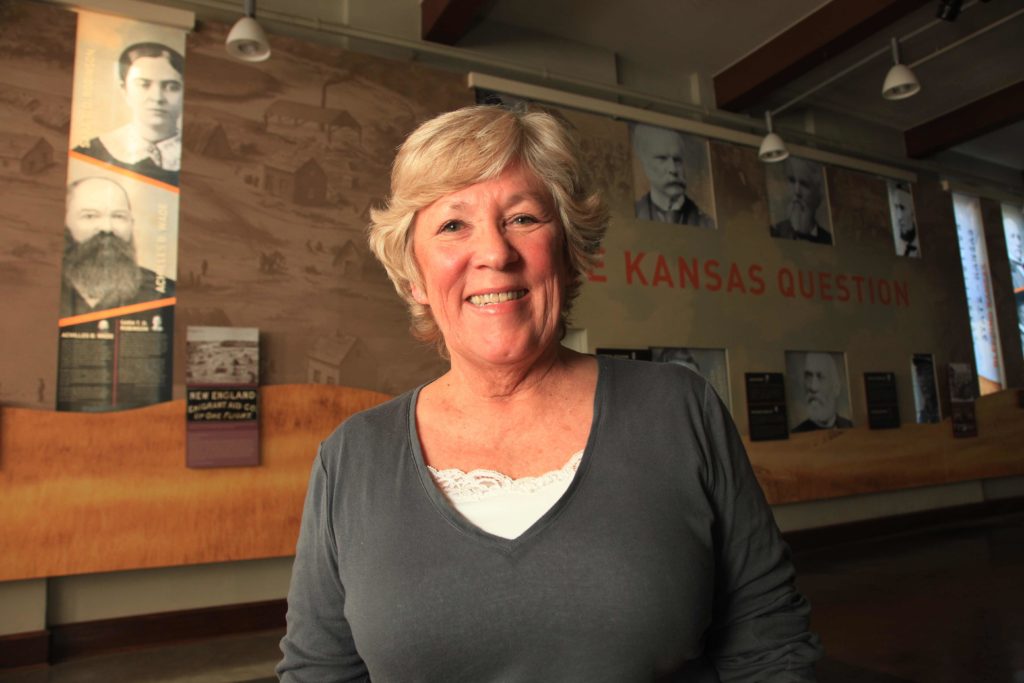 Judy Billings started her career at the Lawrence Convention and Visitors Bureau as a part-time secretary in 1980. In just a couple of years, she had moved into the director’s position, and now, more than 30 years later, she’s retiring as president and CEO of Destination Management Inc.

Community leaders are hosting a reception for Judy Billings, director of the Lawrence Convention and Visitors Bureau, from 4 p.m. to 6 p.m. Wednesday at the Carnegie Building at Ninth and Vermont streets.

Not many folks can say their careers actually started off with a bang — a nuclear one, nonetheless.

In 1980, Billings was the part-time secretary for the newly formed Lawrence Convention and Visitors Bureau. By 1982, she had moved into the director’s position. A rapid rise, but not exactly what you would call a bang, since many Lawrence resident still were trying to wrap their heads around the need for a local convention and visitors bureau.

But then a place that has made a habit of changing fortunes came calling: Hollywood. Producers for a television movie not only wanted to film in Lawrence but also wanted to make Lawrence the centerpiece of the movie’s plot.

“I didn’t know anything about movie-making,” Billings said. “But in the 1980s, I knew we were in a recession and it could bring some economic development activity to town. It was estimated the movie crew would spend $1 million in the community. And I can tell you, they did spend money everywhere.”

The movie, of course, was “The Day After.” The movie of Lawrence in the aftermath of a U.S.-Soviet nuclear war brought media members from around the world to cover the Lawrence premiere. An unheard of television audience of more than 100 million people tuned into the broadcast. The movie is still a bit of a cult classic, and it has carved out a permanent place in Lawrence’s cultural scene.

Come to find out, a one-time part-time secretary has found a lasting place in it too.

“Judy Billings is one of the linchpins of Lawrence culture,” said former Douglas County Commissioner Charles Jones, who worked closely with Billings on many projects. “I think of our community as really culturally rich, from downtown activities to our heritage area. Judy has had a hand in so much of it.”

Billings announced in December she was retiring from her position as president and CEO of Destination Management Inc., the not-for-profit group that oversees the Lawrence Convention and Visitors Bureau, and the Freedom’s Frontier National Heritage Area. Community leaders are hosting a reception for Billings from 4 p.m. to 6 p.m. Wednesday at the Carnegie Building at Ninth and Vermont streets.

When Billings interviewed for that part-time secretary’s job, she told the director of the CVB that the job she really wanted was his. The job has ended up being everything she hoped for, and a bit more, she said.

“I think there are a lot of people in Lawrence who would love this job,” Billings said. “If you love Lawrence, it has a lot to offer.”

Like a history lesson. Billings said the job has been a great opportunity to learn about the area’s pivotal role in the days leading up to the Civil War.

“I grew up in Hannibal, Missouri, and didn’t know much about Bleeding Kansas,” Billings said. “I graduated from the University of Missouri, which is a little-known fact around here.”

Now, Billings lists among her accomplishments the formation of an organization that has brought together 41 counties from the Kansas and Missouri border region to showcase the area’s history. Jones, the former county commissioner, approached Billings about the idea of a federally recognized heritage area as a way to boost the area’s tourism industry about 15 years ago.

The heritage area won congressional approval in 2006 and has undergone years of planning since. The offices for the area are at the Carnegie Building at Ninth and Vermont, and a new permanent display recently has been added to the building.

Billings is convinced Freedom’s Frontier will become a calling card that makes the area more of a national destination, especially for tourists who travel to Civil War sites.

“Most of them have already been to all those places back East,” Billings said. “But most don’t know much about what happened prior to the shot at Fort Sumter.

“I think more and more Civil War tourists are going to start asking ‘what caused all this,’ and that will bring them here.”

When they get here, colleagues said they’ll find signs of Billings all around town.

“So many people come to Lawrence and say that this place just has a certain feel,” said Joan Golden, a current board member of Destination Management Inc. “I think how this place feels has a lot to do with the work Judy has been doing over the years.”

But Billings said she hopes it is not just visitors that get something out of her office’s efforts. She frequently says the Freedom’s Frontier Heritage Area may end up being more valuable to residents than even tourists.

“I think it is important for people to have pride in where they live,” Billings said. “Hopefully, we’ve helped create a sense of pride, and I think that will translate into kids growing up here and wanting to stay here.

“I think what we’re doing now is starting to show people that it is much more than just a great university and a great downtown, and all the things we promote. Lawrence really is part of a much bigger story. Lots of places were founded for various reasons, but not many for reasons as important as this place.”