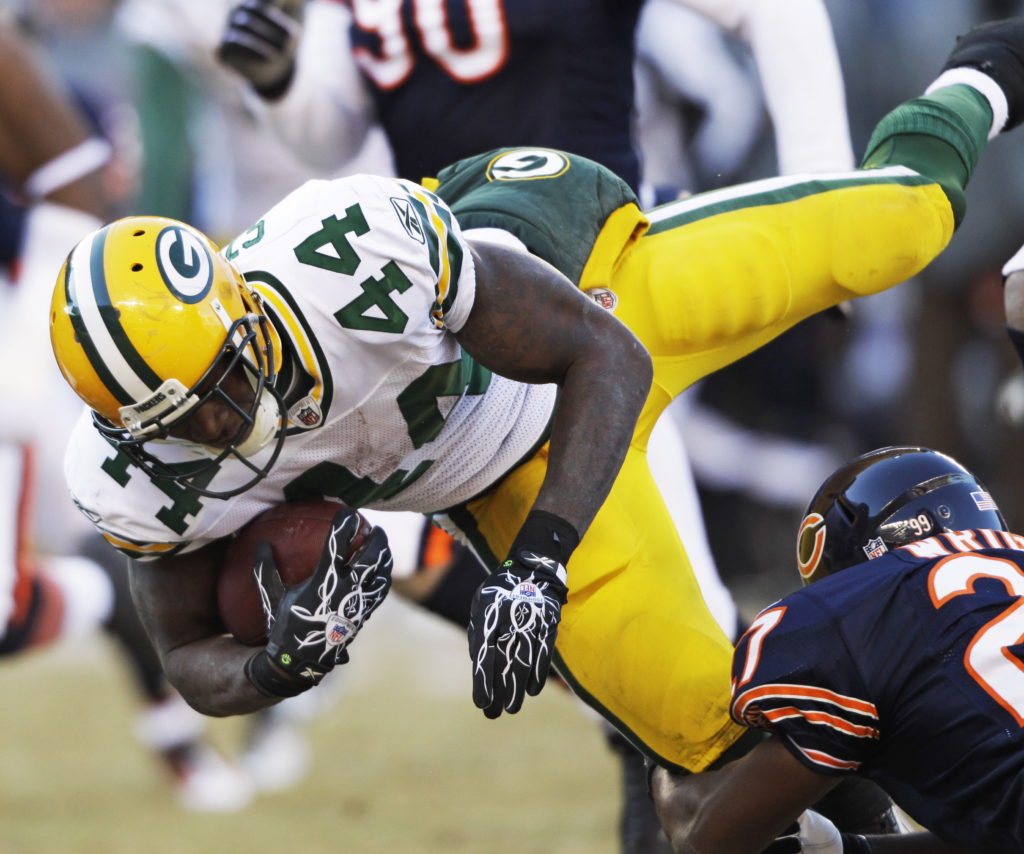 Green Bay Packers running back James Starks (44) dives forward for a gain as he’s tackled by Chicago safety Major Wright. Starks, who played for current Kansas University coach Turner Gill at the University of Buffalo, rushed for 74 yards and a touchdown in the Packers’ 21-14 victory over the Bears on Sunday in Chicago.

Chicago ? There was one Monster of the Midway in the NFC championship game, and his name was Aaron Rodgers.

He wasn’t even at his best and, still, he was better than the first, the second and the third quarterback used in vain by the Chicago Bears against their bitter rivals.

Rodgers ran for a score and made a TD-saving tackle in leading the Green Bay Packers into the Super Bowl with a bone-jarring 21-14 victory Sunday over Chicago.

“It’s an incredible feeling,” Rodgers said. “I’m at a loss for words.”

Rodgers played well enough to keep the Bears off balance all afternoon, Green Bay punter Tim Masthay kept Devin Hester under wraps, and the Packers’ superb defense took care of the rest in knocking the Bears out of the playoffs.

It was the 182nd meeting in the league’s most historic feud, and the stakes had never been bigger.

Now the Packers (13-6) are headed to Dallas. And no matter what happens in the Super Bowl on Feb. 6, the Packers and their fans hold ultimate bragging rights over their foes to the south. Green Bay will face the AFC Champion Pittsburgh Steelers.

“We made a play to win the game and that’s all that matters,” Packers linebacker Clay Matthews said. “Keep playing defense the way we know how, and it’s going to be tough for teams to beat us.”

All Jay Cutler could do was watch, having left the game with a knee injury early in the third quarter. Even before the injury, Cutler was having trouble moving the ball. Worse, he was getting booed by the home fans.

Primary backup Todd Collins replaced Cutler and was jeered even worse. Then little-known backup Caleb Hanie and the Bears (12-6) actually made it a game.

Chicago’s third-string quarterback rallied the Bears for a touchdown drive to cut the lead to 14-7 after Chester Taylor’s 1-yard touchdown run early in the fourth quarter.

Hanie had a chance to tie the game after the Bears’ defense finally got a few stops, but threw a ball straight to Packers defensive lineman B.J. Raji, who lumbered 18 yards into the end zone for a touchdown to give the Packers a 21-7 lead.

But Hanie wasn’t finished. He threw a 35-yard touchdown pass to Earl Bennett to again cut the lead to seven points with 4:43 left.

The Bears forced a punt and got the ball back with under 3 minutes left. Hanie drove the Bears to the Green Bay 29-yard line, then threw a fourth-down interception to Sam Shields — the rookie’s second of the game.

Now all those Pro Bowl voters who didn’t think Rodgers was worthy can relax. They’re off the hook. Rodgers will be headed to the Super Bowl instead.

Rodgers proved ready for the biggest day of his brief but impressive career as the successor to Brett Favre, even if his final stat line didn’t look impressive after an ugly, hard-fought game. Rodgers threw for 244 yards with two interceptions.

“He hurt his knee and he was out, all right?” Smith said. “There’s nothing else for me to tell you on that. I don’t know exactly when it happened, he couldn’t go and that was that.” 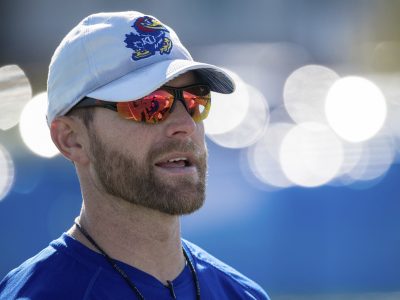