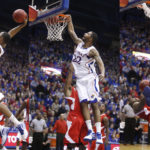 In this sequence of images, Kansas forward Marcus Morris finishes a high-flying dunk and gets the foul from Miami (Ohio) University guard Antonio Ballard during the first half, Sunday, Jan. 2, 2011 at Allen Fieldhouse.

Ah, the holidays. A time to slip into your comfort zone, do whatever it is that makes you happiest, relieves you of stress, puts a smile on your face.

Unless, that is, you happen to play for Kansas University basketball coach Bill Self, in which case it’s time to get pulled out of your comfort zone by whatever means necessary and begin growing on the path he has chosen for you.

Marcus and to a lesser degree Markieff Morris, KU’s two most talented post players, had triggered public words of displeasure from the coach in recent weeks for settling into a comfort zone well beneath the height of their potential. If Self was down on them publicly, it’s a safe bet the king’s speech behind closed practice doors colored the air blue.

Neither twin started Sunday’s game against Miami of Ohio, those assignments going instead to Jeff Withey and Thomas Robinson.

Fire lit, the overmatched Miami players had no shot at putting it out.

The twins took out their anger on the rim, attacking it with dunks off put-backs, pick-and-rolls and fast breaks. Later, they drifted outside and showcased their beautiful shooting touches. They even defended the interior more aggressively.

Reminded of how well they could perform by their coach, who did so by letting them know in every way possible they weren’t performing up to their abilities, Marcus and Markieff proved him right by combining for 38 points and 15 rebounds (eight offensive) in Sunday night’s 83-56 bullying of the RedHawks from the Mid-American Conference.

With Markieff (16 points, seven rebounds) and Marcus (13 points) fueling them, the Jayhawks took a 47-21 halftime lead, by which time KU had a 25-8 advantage on the boards.

Not surprisingly, Self put them back in the starting lineup for the second half, rewarding them for doing what he wanted them to do after a grueling week of double-session practices.

One of the flame-fanners feeding him questions pointed out that the practices sounded “terrible.”

“It was very terrible,” Marcus said.

While he was running, jumping and rebounding, shooting and scoring, Marcus was thinking about the potential ramifications of his hustle.

“I was thinking when I was playing, if we play hard like that, ‘Will he do that to us again?’ You can’t beat him,” he said. “So it’s almost impossible. You don’t know what to do, you know what I mean? If we play hard, will we do this again? Or should we play tired, because we practiced so much? It’s just something you’ve got to ask coach. I just hope we don’t practice like that again. Ever again.”

He’s a stubborn fellow, and it finally seems to be dawning on him that his coach not only is every bit as stubborn, but also holds the hammer. You can’t beat Self, and in trying to do so, you just end up beating yourself, so you might as well stop trying to beat Self.

“No,” Marcus said. “You can’t win. He’ll tell you that, too. You can’t beat coach, you know what I mean? He always has the last word on everything. I just hope we don’t practice like that again. Ever.”

How did it compare to Boot Camp?

Markieff agreed with his brother on the severity of the practices. They nearly always agree on everything, which stands to reason since they have identical brains.

Here’s what the twins are beginning to grasp that Self’s players always eventually get, seldom as freshmen, often as sophomores: The harder you play for him in practice and in games, the less hard he’ll be on you. He’s not going to change, so you might as well change and give him what he wants, becoming a much better basketball player in the process.