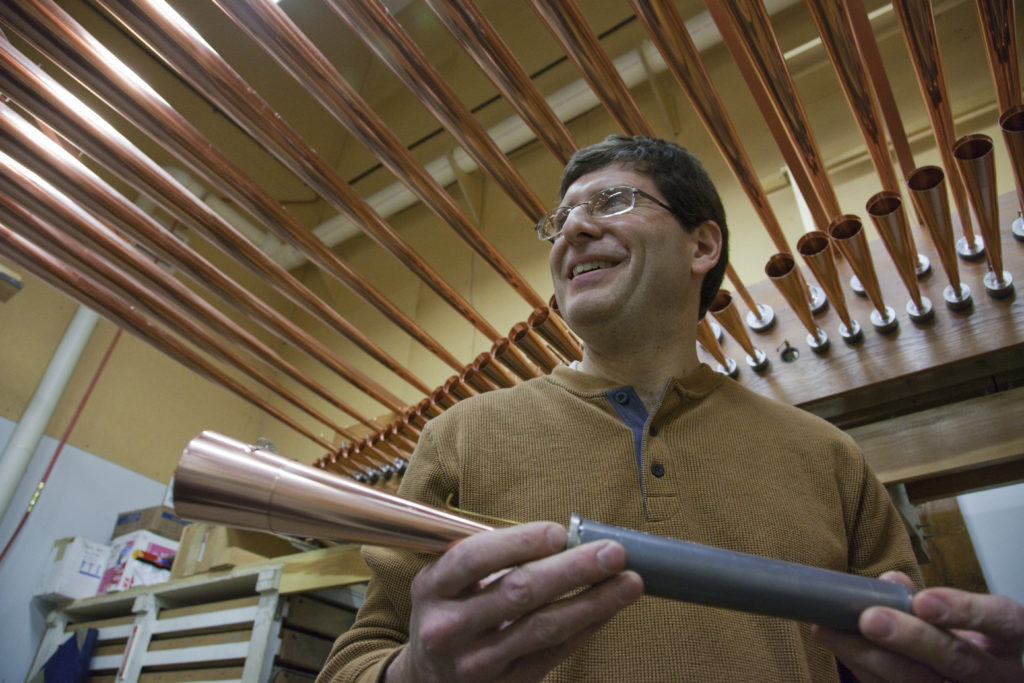 Tom Watgen is the voicing supervisor for the Reuter Organ Company. The voicing department is where Reuter workers “make the pipes sing,” giving each a unique sound. Thousands of pipes are handmade for each organ. 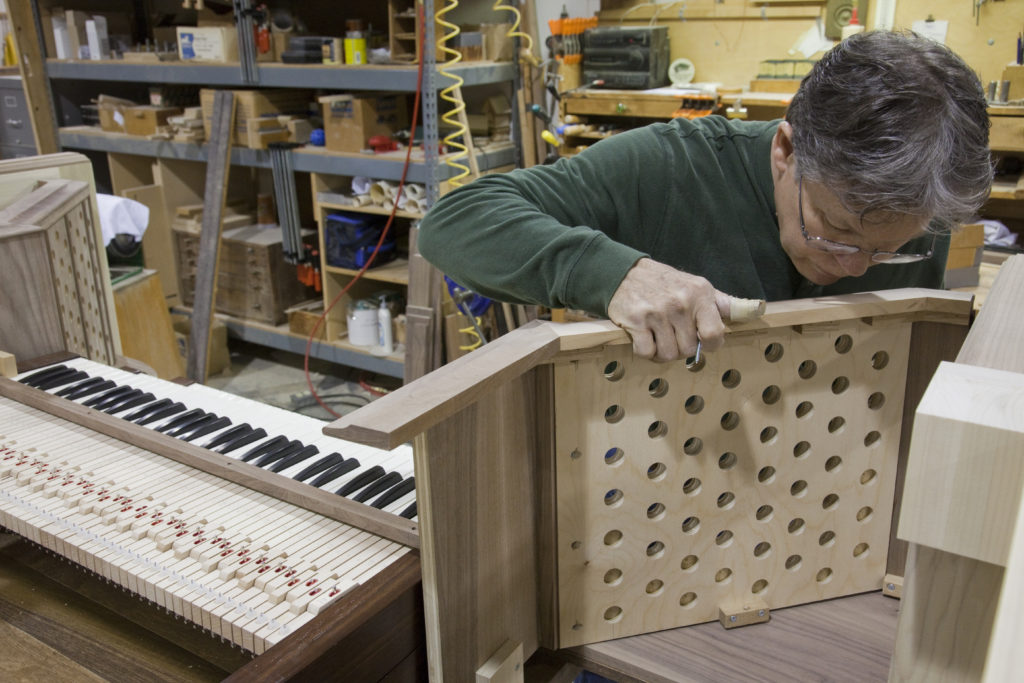 Ed Dorssom works on an organ case assembly at the Reuter Organ Company. The handcrafted pieces can take as much as three months to complete.

Ted Burgess leans over a rounded form of metal, half lead and half tin. Carefully, he solders the metal shut to form a tube. It’s delicate work, but he’s been doing it for years. About twice per year, he pours and casts the metal he’s working with right now.

Burgess builds organ pipes, and he’s worked at The Reuter Organ Co. for 35 years. Now the supervisor of the pipe shop, he’s passing on skills to newer workers.

Reuter has been pulling out all the stops to combine old and new and to stay relevant in a world where many churches are going toward less traditional music and some are closing down because of the economy.

While many East Coast organ manufacturers have closed, Reuter still thrives in the Midwest, updating its instruments with the newest technology and refurbishing instruments when contracts for new ones dwindle.

Reuter’s history in Lawrence is a long one, beginning in 1919 when the company installed an organ at the Masonic Temple and decided to move to town permanently. In 2001, the operation moved from downtown, near Sixth and New Hampshire streets, to a new building in Lawrence’s industrial park, at 1220 Timberedge Road. The move allowed for a more fluid production line and better space for the planning and design of the organs, which can take months or even years to build. The plant took with it many tools and skills that are decades old.

The assembly process starts with fresh lumber that a miller cuts to size for each project on a 1920s-era planer.

From there, the wood can go two places: to the interior or exterior of the instrument.

Ed Dorssom, supervisor of the case department, worked on the console for an organ on the exterior side. He put in about six weeks of work on the frame that holds the instrument’s keys. His job is mainly woodworking, a skill he knows isn’t needed in many businesses any more.

“You don’t see an organ factory on every street,” he said.

For the more detailed work, the company uses a computerized router.

“The organ is unique because it has to sound good, but it has to look good, too,” Watgen said. “How many musical instruments have to do that?”

The interior side builds the pieces that make the organ run, such as the windchest and reservoir. Most of the handiwork can’t be seen in a finished organ, but it’s vital to the operation.

“These guys are the unsung heroes,” Watgen said. “You never get to see their stuff.”

Those pieces are all built to make the pipes play. Pipes less than 4 feet long are cast in-house, with workers heating metal to more than 400 degrees, pouring it, letting it cool and then cutting it into flat patterns of pipes.

Each pipe can make only one sound at one volume. Each organ has, on average, 30 to 35 sounds, so thousands of pipes are handmade for each instrument.

Pipes are formed and soldered, and then they head to the voicing department, where Watgen and others make the pipes sing.

“We give the pipe its voice,” Watgen said.

Pipes can be made of wood or metal, have sounds ranging from trumpets to flutes to bees, and have many different finishes. Some are burnt copper, which gives them a multi-colored look, while others are painted.

“The same paints that are being used on Fords and BMWs are being put on pipes,” Watgen said.

Once the pipes are finished, all parts of the organ go into an assembly room with 45-foot ceilings, finishing a building process that generally takes about three months.

There, some of the newest features to organs can be seen. A recording device allows organists to play and then have the instrument play music back, similar to a player piano. Many organs are also Musical Instrument Digital Interface-compatible, and musicians can plug keyboards into them.

From there, Reuter delivers the organs all across the country, and sometimes around the world. An installation generally takes about a month, and the final cost can range from $100,000 for a small organ to $1.3 million or more for a large one. On average, a church pays about $500,000 for an organ.

“It all depends on how many bells and whistles you want,” Watgen said.

Despite a down economy and changing tastes in church music, Watgen said he thinks organs will be around for a long time.

“What’s more natural than air going through a pipe?” Watgen said. “That’s what our voice is.”