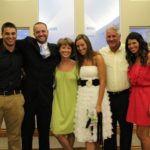 The event will be a chance for people to visit with Jerod’s close friends and family, watch videos of Jerod in rehab, record a message to send to Jerod, make a donation and purchase Jerod’s “Never Give Up” bracelet.

What was supposed to be a celebratory holiday vacation in Mexico turned tragic last month for one Lawrence family.

On Dec. 18, the Nieder family arrived in Playa del Carmen, a beach town just south of Cancun. They had been coming to the region for the past several Christmases, which was a down time in the family’s businesses, Jayhawk Guttering and Nieder Contracting. This year there was an added bonus of a cousin’s wedding.

The family checked into the hotel. And as Mom and Dad, Mike and Sheri Nieder, finished unpacking, their children hit the beach to watch the sun set. The family had traditionally stayed farther down the beach, where the shoreline was smooth. No one thought that section was rocky.

The oldest, Jerod, 29, took two steps into the ocean and plunged head first into the water. He dived straight into a cluster of boulders just beneath the surface.

“The minute he hit the rock, Jerod knew he broke his neck,” said sister Taeler Nieder, a senior at Kansas University.

The collision left him face down in the water and unable to move. Still conscious, Jerod held his breath and hoped that someone would notice. His younger brother Cale, who spent the past summer life-guarding, spotted him and pulled him out of the water.

All Jerod was able to say was “in trouble,” but it was enough to let his brother know something was seriously wrong.

A cousin helped Cale pull Jerod onto the beach, put pressure on his bleeding head and stabilize his body. Taeler ran to get her parents and sister and brother-in-law, Brityn and Steven Summers.

After what seemed like forever to the family, an ambulance arrived. And that’s when a second nightmare began to unfold: navigating the Mexican medical system.

Upon arriving at the first local hospital, the ambulance doors wouldn’t open until a credit card was presented.

“No matter how urgent his situation was, they wouldn’t do anything until we handed over money,” Taeler said.

Once at the hospital, doctors surmised Jerod had shattered his C5 vertebra, which had been pushed into his spinal cord. The C4 and C6 vertebrae were also damaged. Emergency surgery was needed to take the pressure off his spinal cord. The family had to decide whether to wait to do the operation in the United States or do it as soon as possible in Cancun.

They picked Mexico, and at midnight Jerod went in for a six-hour surgery that included taking a bone from his left hip to fuse together his C4 through C6 vertebrae. Once out of surgery, Jerod was placed in the intensive care unit, where visiting hours were slim, his family believed he was being neglected, and communication was hindered by a language barrier.

“There were times when Jerod needed help and was ignored,” Taeler said.

Cale insisted on staying with his brother throughout the night. The next day, two days after his accident, Jerod was flown by air ambulance to Denver’s Craig Hospital, a top-notch facility for spinal cord and traumatic brain injury rehabilitation.

For the past week and half, Jerod has been at the facility, where the process of physical therapy has begun, managing his medications and working toward healing him.

As of now, Jerod is paralyzed from the chest down. He has no movement in his legs or feet. Arm movement is limited, but he can’t move his hands. He can move his head back and forth.

It’s a condition that Jerod and his family hopes will improve. They’ll find out how extensive his spinal cord damage is in several weeks. The average stay at the hospital is three months, but Jerod could be there for more than a year, Taeler said.

“We’re all hoping for a full recovery and that he is walking again. But we aren’t sure how much of that is possible,” Taeler said.

Just the other day, Jerod was fitted with an electric wheelchair, something he considers to be a stepping stone.

Throughout the ordeal, Taeler said, her brother, who is a Free State High School graduate, helps run Jayhawk Guttering with her dad and loves to mountain bike, has had the best attitude imaginable.

“He constantly stays positive. He’s happy (to be) alive, and he won’t be satisfied if he knows he hasn’t worked his hardest,” Taeler said.