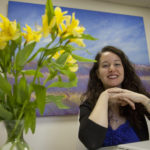 “Caring came naturally to me, and I always knew I wanted to work in a helping profession,” says psychiatric registered nurse practitioner Maria Ilardi, who has recently opened a private practice in Lawrence.

Born in Ridgewood, N.J., where her mother was a high school teacher and her father a pharmaceutical chemist, Ilardi attended high school at Miss Porter’s boarding school, Farmington, Conn. In her senior year, Ilardi completed an internship at the University of Connecticut hospital.

“The school’s ‘winterim’ program was excellent,” she says. “Normal classes were suspended for a month, and we were able to have work experience. I followed a doctor around for a month.”

Ilardi enjoyed the experience and liked the medical profession so much she decided to become a nurse. She graduated from Emory University, Atlanta, in 1988 with a Bachelor of Science in nursing.

“I liked psychiatric nursing best because I got to spend more time talking and listening to patients rather than simply providing medical care,” she says.

Ilardi married her husband, Steve, in 1989, and they moved to North Carolina in 1990. While he completed graduate work at Duke University, she worked as a psychiatric RN and a research coordinator at Duke Medical Center and led therapy groups. She embarked on a master’s degree in nursing at the University of North Carolina, and when she graduated in 1994, she opened a private practice in Durham, N.C., provided psychiatric home health care and served as a clinical instructor at North Carolina A&T State University.

Ilardi moved to Lawrence in 1997, when Steve accepted a faculty position at Kansas University’s psychology department. She worked as a staff nurse at Menninger Clinic, Topeka, before moving to Bert Nash Community Mental Health Center in 2000.

“I loved working at Bert Nash, but after 10 wonderful years there I was ready for a new professional challenge,” she says.

“Starting a new practice when the economy is down may seem like a risk, but I felt there was a need for another psychiatric medication provider in Lawrence, and I wanted to be able to spend more time with my patients.”

She set up her practice in the Reed Medical Group in order to retain social and medical connections.

“Learning the business side of the practice, insurance contracts, billing and scheduling has been quite a learning curve,” she says. “But I’m getting the hang of it and enjoying it.”

Ilardi encourages patients to live healthiest and happiest life they can by taking a holistic approach to their mental and physical health.

“Based on my extensive experience prescribing medications, I know psychiatric drugs can often be enormously helpful, but they frequently fail to bring about complete and lasting recovery on their own,” she says.

“I continue to prescribe medication for many patients but I also encourage them to make lifestyle changes. We discuss the importance of good sleep habits, healthy diet, exercise, sunlight exposure and social support. Patients are usually pleasantly surprised to learn they have such options.”

Ilardi practices her own advice. She’s an avid tennis player and runner.

“Everyone can benefit from living a healthy lifestyle,” she says.