Gov. Mark Parkinson announced the appointment of Chris Biggs, who was sworn in immediately.

Biggs will serve out the term of Ron Thornburgh, a four-term Republican who resigned Feb. 15 to become a senior vice president for the Olathe-based Web site company NIC Inc. 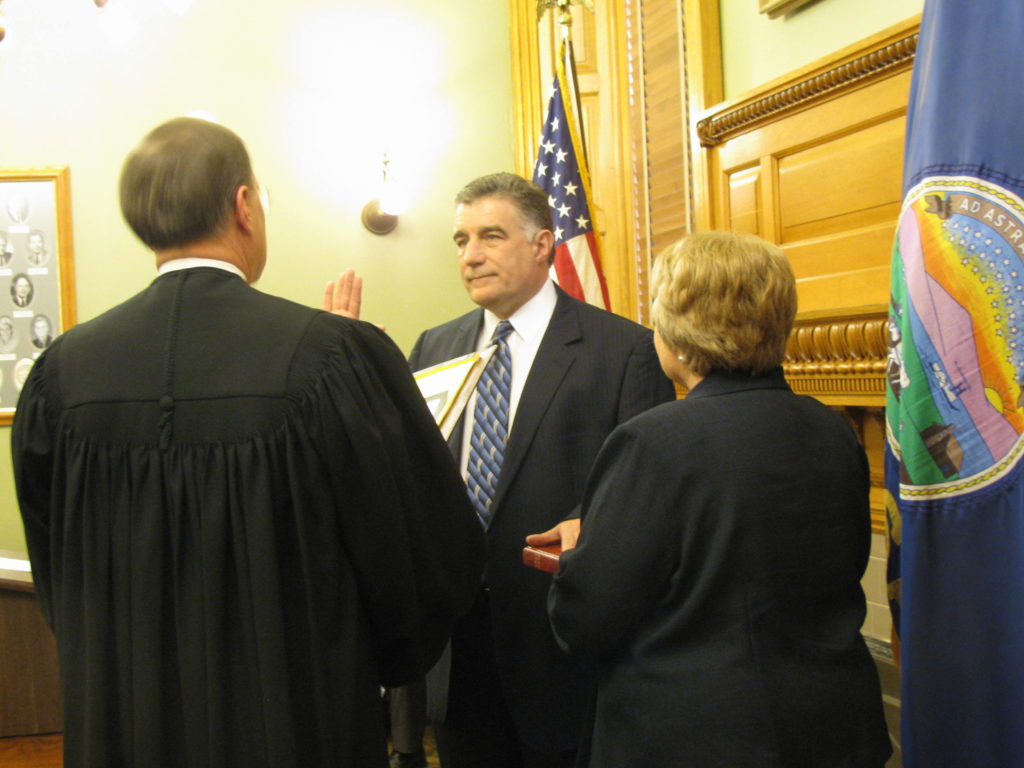 Chris Biggs is sworn in Tuesday as the new Kansas secretary of state.

The new secretary of state already is running for the job on a permanent basis as a candidate for the Democratic nomination. Parkinson’s appointment represents an endorsement of Biggs over state Sen. Chris Steineger, of Kansas City, in the party’s Aug. 3 primary; three Republicans are seeking the GOP nomination.

Biggs praised Thornburgh and said he agrees with him that Kansas does not have widespread problems with voter fraud, as some conservative Republicans have suggested in recent years. Biggs said voter apathy is the larger issue.

“I’m going to go into the office of secretary of state without any particular kind of agenda,” he said. “My focus right now is going to be going in and meeting with staff and doing the job that’s there.”

Biggs, 51, is a former Geary County prosecutor who has served as securities commissioner since May 2003. He was appointed to that job by then-Democratic Gov. Kathleen Sebelius after he narrowly lost the 2002 attorney general’s race.

Parkinson said Biggs’ experience as a prosecutor and regulator is valuable because businesses must file articles of incorporation and annual reports with the secretary of state’s office.

As for his knowledge of state election laws, Biggs said, “It’s more than the knowledge I had of securities law that I had when I took over as securities commissioner.”

Biggs also picked up the endorsement of Senate Minority Leader Anthony Hensley, a Topeka Democrat, who said his administrative experience makes him a better candidate than Steineger.

The GOP candidates for secretary of state include Shawnee County Elections Commissioner Elizabeth Ensley, a Thornburgh appointee who has his endorsement.

The other candidate for the GOP nomination is J.R. Claeys of Salina, a former CEO of the National Association of Government Contractors.

Thornburgh was part of a GOP political chain stretching back to Secretary of State Paul Shanahan, who was elected in 1950. After him, all new secretaries of state had previously served as top assistants to their predecessors.