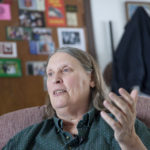 After waiting nearly three and a half years for a decision, Debbie Shirar, of Lawrence, was finally declared disabled by the Social Security Administration. In addition to getting some financial relief, Shirar says it is even more satisfying to have the difficult claim process come to an end. She would now like to work as an advocate for others.

For three years, four months and 11 days, Debra Shirar waited for the Social Security Administration to say yes to her disability claim.

In that time, she accepted state assistance for a little more than $100 a month, lived with a friend and rummaged through her neighbors’ garbage to find aluminum cans she could sell to buy medicine.

“I have taken 30 days worth of pills and made them last 90 … because I don’t have the money,” Shirar said.

The former gym teacher, prison guard and call center representative has many physical ailments that have left her unable to work. They include migraines, sleep apnea, asthma, arthritis in her knees, a degenerative tailbone and neuropathy in both arms.

Two weeks ago, the Social Security Administration told Shirar something she had known since October 2006: She was disabled.

“It’s over,” 58-year-old Shirar said. “The resolution is nice, but not as sweet as it would be if I didn’t have to go through with it in the first place. I would rather be working.”

Shirar’s case is not unusual, said Rocky Nichols, executive director of the Disability Rights Center of Kansas. Even Shirar considers herself fortunate with her almost three-and-a-half-year wait.

“People with disabilities get pulled through that wringer over and over again,” Nichols said. “The system of applying for and being deemed eligible for Social Security benefits can be a very draining, difficult system to navigate.”

A combination of aging baby boomers, shrinking or stagnant budgets and a poor economy has sent the number of disability cases skyrocketing in the past few years.

In 2007, Kansas was ranked as the worst state in the country for the time it took to process disability claims.

The SSA took note and started making improvements by hiring more administrative law judges to hear cases, having other centers across the country pick up cases, and making plans to open a new hearings office in Topeka in the next year.

Both the Kansas City and Wichita hearing offices have seen a drop in the number of cases waiting to be heard and the length of time it takes to process them.

Still, at 581 days, Kansas City ranks among the top 10 offices in the country for the longest wait times, according to data provided by the SSA.

Shirar first applied for disability in October 2006. When that claim was denied, she appealed it.

“I would have crawled to Kansas City if I had to,” Shirar said at the time. “That was one of the most important days of my life.”

What she didn’t realize then was that her wait wasn’t over.

After the hearing, 90 days went by with no decision.

Through the help of U.S. Rep. Dennis Moore’s office, Shirar discovered that a mistake had been made and a decision was never sent to her or her attorney.

Shirar learned of the decision to deny her claims 30 days after the deadline for appealing it. With the urging of Moore’s office, the case eventually ended up at the Appeals Council in Virginia, Shirar said.

A decision on that case has yet to be made.

In June as the first case was in limbo, Shirar filed another disability claim on the advice of her attorney.

“I thought, ‘Oh, great, here is the nightmare again,'” she said.

This time the process went much faster. A decision arrived in her mailbox by mid-February.

“I was scared to death,” Shirar said of opening the letter that gave her the approval she had been waiting for. “Once I read it, I sat there and I couldn’t believe it.”

Shirar will soon start receiving monthly disability checks — an amount that is roughly 10 times more than what she has been living on for the past year.

Shirar predicts she’ll continue to be a penny-pincher. She already has set up appointments to see an eye doctor and a dentist, something she couldn’t afford to do while waiting for disability.

“The monetary (part of it) isn’t that important to me. The thing that is really important to me is I will be able to go to the doctors now,” Shirar said.

She has other plans as well, such as helping local disability advocacy groups.

“I can’t work any more. That is obvious,” Shirar said. “But there is nothing that says I can’t talk. So I intend to tell my story to everyone I know.”