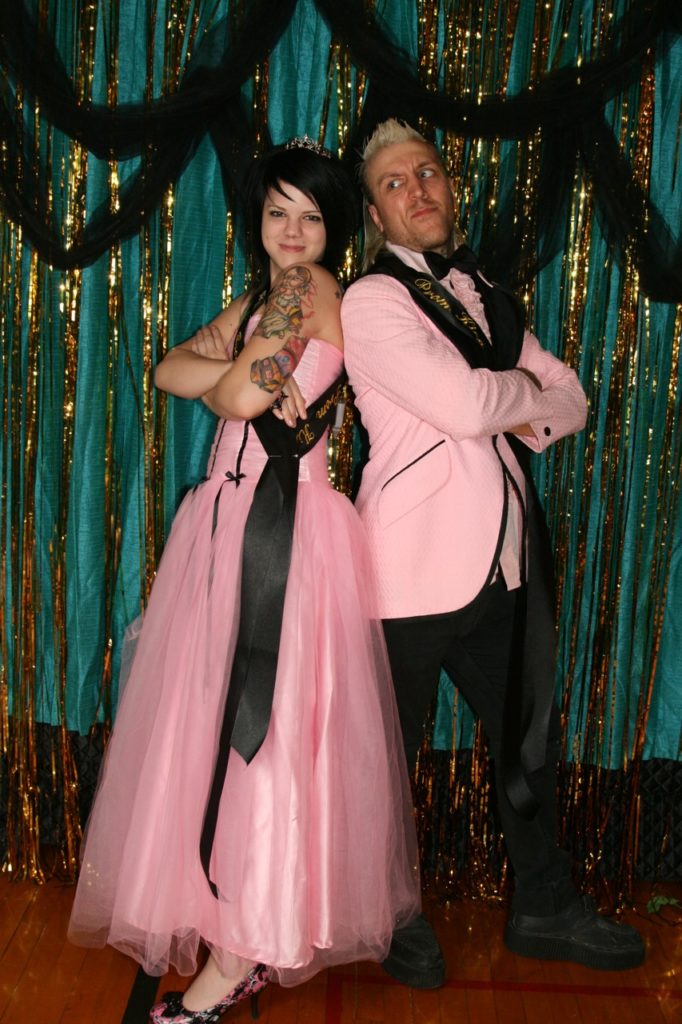 Photos from past Harveyville Proms.

Being a nerd, far less intimidated by comic books and video games than by girls and dancing, I didn’t go to my senior prom.

Flabbergasting, I know. Regardless of how shocking that revelation might be, not going to prom always seemed like a squandered opportunity. After all, you only get a chance to dress up like a sequined train wreck or a powder blue ruffle storm in your awkward years and slow jam uncomfortably but once in your life. So when the opportunity arose to go to something called the Harveyville Prom, I had two questions: 1. “Where do I sign up?” and 2. “What in the name of Sadie Hawkins is the Harveyville Prom?”

“The Harveyville Project is a creative retreat, residence and workshop housed in a former high school and grade school building set on about 10 acres in rural Kansas,” says Nikol Lohr, who co-founded the project in 2005 with her partner, Ron Miller. “We irregularly host individual artists of all kinds who want to work intensively on specific projects. It’s very quiet out here and really allows for uninterrupted work.”

Lohr is an arts and crafts maven who converted her success as blogger for The Thrifty Knitter and author of the burlesque knitting book “Naughty Needles” — and channeled her fondness for “institutional architecture” — into a pastoral fiefdom. On top of buying and reconstituting the Harveyville schools, she and Miller are in the process of renovating the old school buildings of Eskridge in rural Wabaunsee County.

And with the great power of old schoolhouses comes the great responsibility of old gymnasiums. “If you live in an old high school and have a gymnasium,” Lohr says, “you kind of have to throw a prom, wouldn’t you say?” 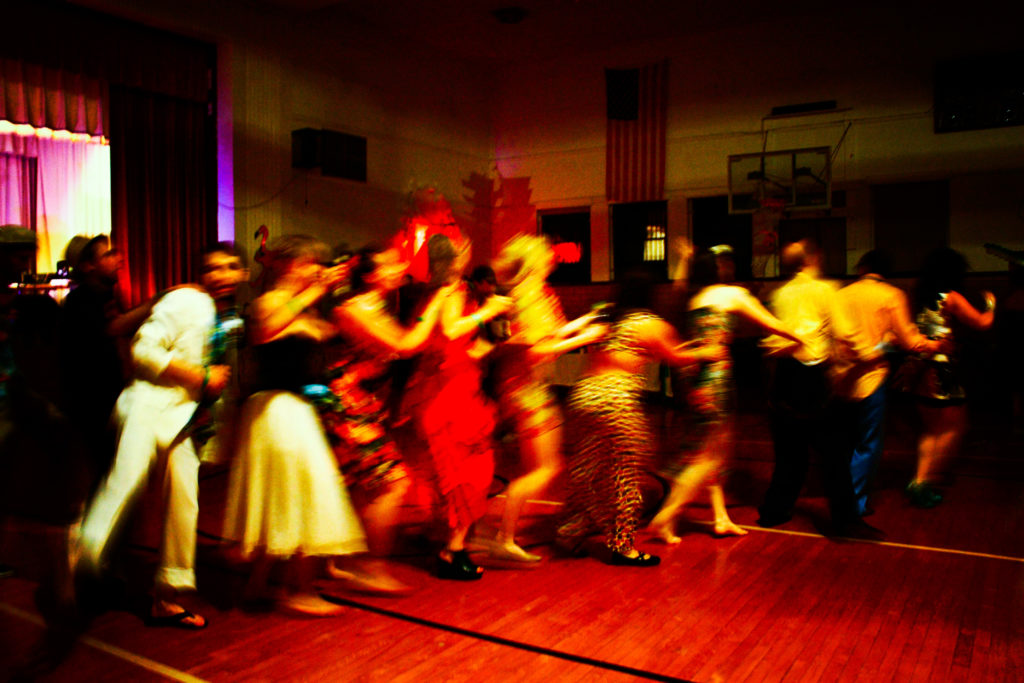 A conga line forms at this year's Harveyville Prom.

Since 2006, therefore, the Harveyville Project has hosted the Harveyville Prom. It’s been a fundraiser for the project to help with its mission of providing affordable lodgings for starving and secluded artists and has since become a bit of a rural legend.

“It’s something like a grown-up version of a high school prom,” Lohr says. “Well, more like a high school prom from movies, since even in my day, proms had abandoned school gyms in favor of boring hotel ballrooms. So a traditional dinner and dance, but without the teen angst, cheerleaders and chaperones — and with better music and drinks. Probably half the people who come say they didn’t go to their own high school proms.”

That’s where I come in. Considering there’s a very strict dress code, I needed to do some shopping. The theme this year was “Tahitian Holiday,” inspired by the actual theme of the 1971 Harveyville Rural High School prom. But so long as you wore any sort of proper prom attire — coconut bras and grass skirts were encouraged, but not mandatory — you were admitted. Since I missed my original prom, I had to make up for lost time and figured I should go all out. So, like any fashion-forward man, I went to Wildman Vintage and found a lovely blue strapless number and some high heels. This was going to be the best adult prom in rural Kansas ever. 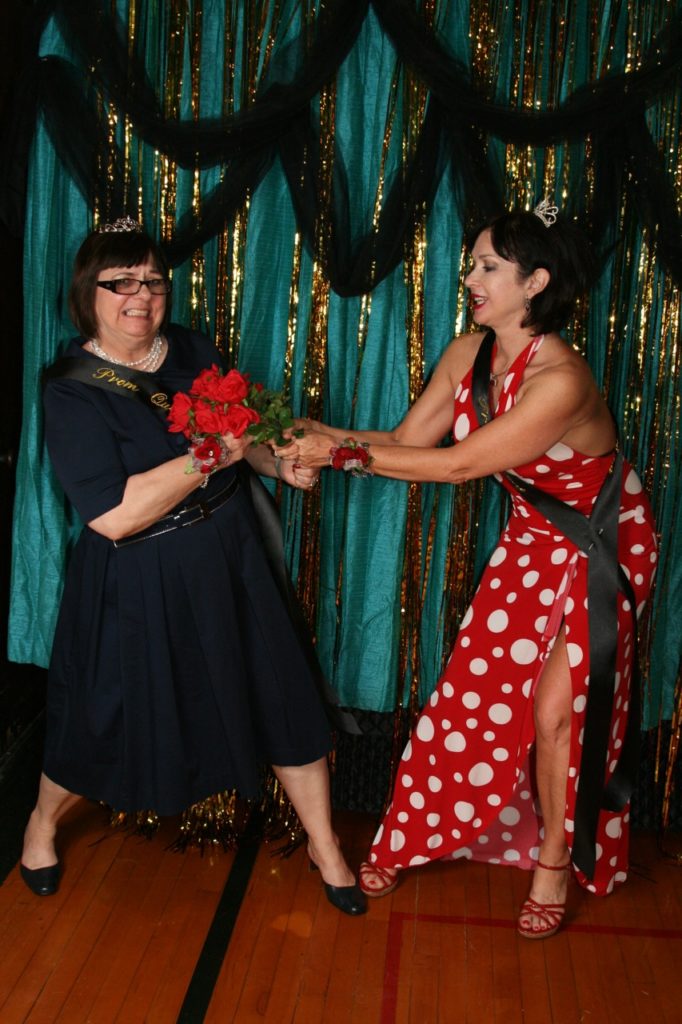 After driving for about an hour and a half from Lawrence on Saturday, I arrive in Harveyville. It’s a teensy little town of about 250 that you would miss if you blinked while on the two-lane country roads you have to use to get there. The high school isn’t well lit, and except for the small prairie fire of tiki torches illuminating its front walkway, you’d have no idea you were in the right place.

The half-century old building is austere brick, but as you approach from the parking lot, you begin to hear the ’60s psych rock throbbing from the gym. The juxtaposition with the sun setting serenely behind the nearby field is striking.

Upon entering the school, you’re greeted by a demented trophy case filled not only with plaques devoted to athletic accomplishment, but also with anatomical models and Mexican wrestling masks. Visible humans and luchadores — an appropriate tone-setter for the rest of the evening.

At first glance, the gym looks like any other. Hardwood, basketball hoops, bleacher seating — it even has that musty smell you came to know and love in high school. It’s festooned with the usual prom decorations like Christmas lights and streamers. The kids are all gussied up in their vintage dresses/tuxedos and lining up for punch. Except the “kids” are all over 21, typically sporting some very elaborate tattoo work, and the “punch” is an open bar covered by the price of admission. It’s time for me to squeeze into my dress, get some “punch” and dance like Kevin Bacon railing against the puritanical rules of small-town America (if Bacon were a graceless drag queen wobbling unsteadily on heels).

The dancing comes easy thanks to national touring acts The Royal Butchers and Kid Congo and the Pink Monkey Birds. They specialize in rockabilly and garage rock, respectively, and perfectly complement the throwback atmosphere. Nearly 200 adults revert to teeny boppers and start twisting, shaking and jiving at half court. I’d like to take this opportunity to apologize to anyone I might have impaled with my clumsily flailing pumps.

After that mildly inappropriate climax, the prom winds down. The tiki torches out front are dwindling. Fortunately, the Harveyville Project has converted all the classrooms into private suites and hostel-style sleeping arrangements. And even if you didn’t snag a bed, people were more than welcome to bring a sleeping bag and crash on the gym floor.

Not wanting to contribute to the hot tranny mess Lohr and Miller would have to clean up the next day, I packed up my blond wig and made my leave. I feel that I’ve had a proper prom experience and now think that my actual senior prom probably couldn’t have held a candle to the Harveyville Prom.

I’ve learned many things after the event — that you’re never too old to recapture your youth, that nostalgia is a powerful force, that good company and hosts are never to be taken for granted, that rural Kansas is not to be underestimated in its capacity for open-mindedness and community — but mostly I learned I need to wear more sensible shoes next time I go dancing.

These blisters are terrible. I have no idea how you do it, ladies.