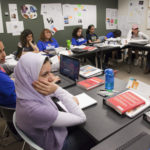 A group of women from Egypt and Morocco are participating in a leadership conference at Kansas University funded by a grant from the U.S. State Department. Yasminah, from left, and Radwa, both of Egypt, listen during a recent session. The women asked that their last names not be used.

A group of 20 international students received a crash-course in American leadership at KU this week.

Women from Egypt and Morocco participated in the “Women’s Civic Leadership from the Heartland” – a program designed by the U.S. State Department to promote a better understanding of America abroad and develop future world leaders. The women asked that their last names not be used for this story.

“When you see people, successful professors, ex-senators, people who have served on Congress, all of them are women and they have families and their families supported them,” said Radwa.

The 20-year-old science major is far from her home in Egypt, but has enjoyed learning about women’s history in America. Some students were surprised by that history.

“Every lecture completely changed my mind about lots of things,” said Chaemaa, a student from Morocco. “I never knew that American women had to struggle for their rights. It was a really huge shock for me,” she said.

The program began with the students making posters to express their principles, mission, vision and values. Andi Witczak, director of KU’s Center for Service Learning, said the exercise helped the women find their voice – something they don’t often exercise in their home countries.

“They asked us to express ourselves through images and music and colors,” said Meruem.

The 20-year-old Moroccan student said she discovered things she didn’t know about herself that will help her “engage in the process of leadership.”

The students also traveled throughout Kansas and spoke to successful women about what it takes to be a leader. They hope to return home and make a positive change within their communities. Just don’t expect them to call themselves “leaders.”

“We don’t use the word leader,” Witczak said.

Instead, she said, the program focuses on “engaging the process of leadership and how you can do that at any level and how you don’t have to have the title.”

The students were also curious about a woman’s role in American society and how they balance work and family life. “In our country we have women who are very successful but they don’t have families,” said Radwa, “can you have both?”

The students will present a social change project at the end of the conference and then head to Philadelphia next week to learn about the role women played in the founding of the United States. Despite being worlds away from Egypt and Morocco, some students said they’re sad to be leaving.