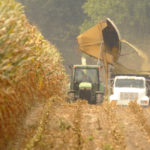 Kent Nunemaker cuts some corn for silage in this file photo. Researchers from KU and other schools around the state are collaborating on problems related to climate change and energy use in Kansas, including predicting how things might change for farmers.

• The $20 million grant is being awarded to the Kansas NSF Experimental Program to Stimulate Competitive Research (EPSCoR) at KU. The federal program targets states that have been traditionally underfunded in science and engineering.

• The $20 million grant is supported by $4 million in matching funds from KU, Kansas State University and Kansas Technology Enterprise Corporation.

Kansas University researchers are working with other schools across the state on four problems related to climate change and energy use in Kansas.

The $20 million project funded through the National Science Foundation is one of the few funded projects looking at both climate and energy.

Kristin Bowman-James, a distinguished professor of chemistry at KU, is coordinating the $20 million project.

Chuck Rice, distinguished professor of agronomy at K-State, will be leading one team of researchers to create a climate model that will predict what the climate will be like in the state 20, 50 and 100 years from now.

He said the data will likely vary across the state, with an increase in the variety and intensity of precipitation and storms.

“Kansas farmers will need to adapt to that change in climate,” Rice said, mostly to any changes in rainfall amounts.

His group will also look to see how Kansas farmers might be able to change their climate for the better — through potential policy changes like subsidies to reduce nitrous oxide and other emissions.

One of the more interesting parts of the project, Bowman-James said, is being led by Dietrich Earnhart, a recently promoted professor of economics at KU.

It will bring a social science approach to an area traditionally dominated by other science fields, she said.

Through a series of surveys of Kansas farmers, Earnhart and others will seek to learn how farmers make decisions about which crops to grow, and whether climate change will impact those decisions. The climate in Kansas is variable, and will likely continue to get drier in the west and wetter in the east.

“The differences that already exist in Kansas are only going to get wider,” he said.

His project will attempt to predict how climate would change in 10 years and present that information to farmers and see how they would react to those changes.

The information learned could increase or decrease the need to respond to climate change in other ways, Earnhart said. Also, he said, farmers may learn that it’s easier to adapt than it first appeared.

Judy Wu, distinguished professor of physics at KU, is leading a project that will examine the use of nanotechnology in solar power.

Nanotechnology examines the possibility of manufacturing on the molecular or atomic levels, and its expansion to solar power could create something that resembles an artificial replication of plants’ photosynthesis process that converts sunlight to energy.

Wu said her team will examine how to make solar power more efficient and cost-effective.

“That’s a true bottleneck at this point,” Wu said, saying that if that hurdle could be cleared, then solar power may become a more viable alternative for many who wouldn’t use it otherwise.

Joane Nagel, distinguished professor of sociology at KU, is working with Dan Wildcat, a professor at Haskell who studies climate change, to develop a path for American Indians to earn doctoral degrees and examine the impact of climate change and energy issues on native lands.

Nagel said the two are working on a 10-week summer internship program for Haskell students that encourages them to develop projects involving climate change issues for native lands.

She said the project should help native cultures, many of which have agriculturally based economies and are in coastal areas, deal with the impacts of climate change.

“They’re probably the least situated communities in the United States to cope with climate change,” she said.

Bowman-James said the four projects together represented a collaborative effort the likes of which is rare in academia.

“They really do interlock because each one is interdependent with the other,” Bowman-James said.