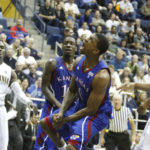 Berkeley, Calif. ? For a two-minute blitz at the beginning of the second half, Kansas University’s basketball team showed its very high ceiling, as high as any team’s in the country.

Nobody tried to do too much, and as a result, everybody did a lot. Tyshawn Taylor, Josh Selby, Tyrel Reed, Marcus Morris and Markieff Morris looked as if they had played together for years, and Kansas turned an eight-point lead built during a ragged first half into a 17-point advantage.

Then in a blink of an eye — that’s what eyes do when somebody gets smacked in the face by an elbow, and that somebody was Harper Kamp, elbowed by Marcus Morris under the hoop — and a couple of inspired minutes, Cal had turned it into a three-point deficit.

Marcus Morris, KU’s active career scoring leader, spent the final 17:23 in the locker room, where he wasn’t able to help his team. The Jayhawks didn’t need him to win the game, but a more talented, deeper team than Cal might have made them pay.

KU’s 78-63 victory Wednesday night on Cal’s campus came with warts and welts that need to go away soon.

Morris, who looks like such a smart player so often, is a junior. He’s been around too long to let his emotions rule his brain. He’s too important a player, looked up to too much by teammates, to pull a freshman move the way he did. And it’s not the first time.

He was far from the only player on both teams to lose his composure. Cal guard Jorge Gutierrez — the guy with the pony tail — looked to be auditioning for a boxing career and was whistled for a technical foul. KU’s Thomas Robinson, apparently tagged in the face by Gutierrez, can attest to the speed of his combatant’s hands.

Robinson picked up an intentional foul in the first half, a technical in the second. Brady Morningstar knocked the ball out of a Cal player’s hands on his way to the bench during a late break in the action and was given a technical. Robinson plays an enforcer role. Sure, he has to get better at not getting caught enforcing, but at least he’s on the right page.

Not surprisingly, it was Marcus Morris who drew the most criticism from his coach after the game.

“Cal was chippy, but we didn’t handle it well,” Kansas coach Bill Self said. “We let it bother us too much and had to get the last word. I was really disappointed in Marcus. He got exactly what he deserved, from what I was told. When guys put a wrong agenda ahead of their team, it’s very, very, very selfish.”

It’s not the first time the third-ranked, undefeated Jayhawks have gotten hot in the head this season. Self didn’t mince words as to the chief source of the problem.

“It’s because of the twins,” Self said. “They’ve got to wake up. When it gets chippy, if you’re competitive, you’ve got to beat them on the scoreboard. You don’t try to get the last word.”

Senior Tyrel Reed, the team’s most composed player, played an outstanding game, soaring high for rebounds, knocking down three-pointers and driving hard to the hoop.

“It really just comes down to maturity and not letting yourself get in that position,” Reed said of the team’s lack of composure. “As the season goes along, I think we’ll get better at that.”

If they want to give themselves their best shot to make it all the way to Houston for the Final Four, they’ll get better at it.