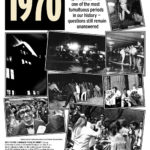 Editor’s Note: Forty years ago today, the Kansas Union was ablaze, the work of an arsonist. By the time 1970 ended, the city of Lawrence would experience many acts of violence, protest and unrest. Today starts a three-day series about that tumultuous year.

Thursday: How 1970 shaped the city and its future.

Blacks were angered by the inequalities that persisted. Radicals were protesting an unjust war, the draft and the Establishment.

Adding fuel to the unrest were drugs and the fact that Lawrence was the halfway point for those in the counterculture traveling from San Francisco to New York.

In response, the police stepped up enforcement and vigilantes stood watch over Lawrence.

Not since Quantrill’s Raid in 1863 had the city seen so much violence and destruction.

But on April 20, 1970, 40 years ago today, it was the image of the Kansas Union ablaze — with flames shooting through its roof, students pulling fire hoses up steps and Kansas University administrators looking toward the sky in disbelief — that had the rest of the world taking notice of the unrest in Lawrence.

That the burning of the Kansas Union was the work of an arsonist is not debated. A fire accelerant was found in the cloakroom where the fire started. And matchbooks were found strung together in the Hawk’s Nest.

What is still unknown is who did it and why.

The many directions of finger-pointing regarding who set fire to the building is indicative of just how diverse and numerous the forces of unrest were in Lawrence during that era.

Monte Pearson, who was among the many firefighters responding to the fire that night, is convinced the stream of violence was the work of a group of outsiders who “came in just to do bodily harm and cause property damage to the city of Lawrence.”

Verner Newman III, the only black police officer who stayed on the Lawrence force in 1970, said there were reports of two young black men running out of the union before the fire.

“And that is the only thing they got,” he said of eyewitness accounts.

On the outskirts of KU’s campus, in the Oread neighborhood, lived what were called the street people, a collection of radicals, hippies and runaways. Their designated spokesman, George Kimball, was out of town that night. But it didn’t keep the FBI from knocking on his door and asking questions.

His name, along with most of those working on the underground newspaper at the time, was among the suspects.

“They had this list of people who allegedly concocted this conspiracy to burn the union. And I literally didn’t know half of those people, had never met them,” Kimball said. “I knew nothing about the union fire beforehand.”

A disgruntled KU student, someone passing through, a nut — it could have been any of those, said Del Shankel, who then was the associate dean of liberal arts and sciences and a professor of microbiology.

In his book “This is America? The Sixties in Lawrence, Kansas,” Rusty Monhollon touches on some of the above possibilities. He also includes another: a right-wing, white radical person “intent on stirring up trouble,” according to one source Monhollon interviewed; a Minuteman who feared the rights of whites were being threatened.

Who burned down the Union is probably a moot point, an article that ran exactly 30 years ago in the Lawrence Journal-World noted. The statute of limitations on the crime ran out in 1972.

But still, many wonder.

“Every once in a while, I think about the fact that it would have been very nice if we could have identified and found the person,” Shankel said.

These are the closing words that Abbie Hoffman spoke in front of an audience of 7,000 at Allen Fieldhouse nearly two weeks before the Kansas Union fire. Hoffman, co-founder of the Yippies and on trial for his role in instigating riots during the 1968 Democratic National Convention in Chicago, told the crowd that he “wasn’t for peace.”

In the minds of some, Hoffman’s appearance in Lawrence sparked the fuse that ignited the violence.

On that night, Hoffman’s profanity-laced rants were followed by loud cheers. But he also took on hecklers who said they thought he “was going to tell the people what to do.”

“This place is a (expletive) drag. I’m going to Dallas, Texas,” he famously said when the hecklers persisted.

Social discontent was pulsing through Lawrence long before Hoffman’s arrival. But between Hoffman’s visit and the union fire, momentum grew.

Fifty black youths locked themselves in Lawrence High School’s main office, angry over the lack of black cheerleaders and homecoming queens. They asked for an expanded black studies curriculum and more black teachers. Two days later, fights broke out between black and white students. Five students ended up in the hospital.

Four days before the Kansas Union burned, a fire gutted the Gambles Furniture Store in downtown Lawrence. A firebomb was found among the wreckage.

The turmoil that came to Lawrence in 1970 was preceded by years of race riots in urban America in the 1960s, the deaths of Martin Luther King Jr. and Robert Kennedy and the building moral outrage over the Vietnam War and the draft.

“It was a little late getting to Lawrence, but once it did, it was incredible,” retired KU history professor Bill Tuttle said.

First on the scene, Lawrence Fire Chief Fred Sanders radioed back that flames were coming through the roof and more help was needed.

“Before we got (there), we knew we had a good working fire going,” he said.

A quarter of the size of today’s fire department, with 145 people, the crew’s limits were tested by the fire, firefighter Pearson said. Every firefighter in the department was called to the scene.

Students helped pull hoses off the truck and ran in and out of the union saving precious artwork and furniture. The firefighters worked at protecting the unburned side of the building. Eventually, the fire ran out of fuel.

By the end of the night, the top two floors of the six-story Kansas Union were destroyed. The roof over the ballroom had collapsed. Damage totaled more than $1 million.

From his home on Learnard Avenue, Shankel saw the orange glow in the sky and heard the sirens. He walked up to campus, stood across the street and watched the union burn.

“To think about what might have caused it and what might have happened as a result, it was traumatic,” he said. “I think just about everyone there was distressed by it.”

“PD units information, one fire truck did receive two bullets, two bullets hit on the left side. Be advised,” a dispatcher told police over the radio.

“Let’s put a shotgun on them fire trucks before (the firefighters) go out,” the police officer replies.

In the days following the Kansas Union fire, such scanner talk was common.

Firefighter Stoffer said a bullet was found lodged in a pumper truck no more than a foot from where he was sitting.

From sunset to sunrise, the fire department took on an unrelenting barrage of calls. Windows at the fire station were blacked out so firefighters and police could sleep during the day.

“Once the sun started going down, you could just hear the guns going off around town, and all that ruckus would start again,” Pearson said.

The National Guard arrived. For three days Lawrence was under a curfew. And 65 people were arrested, many of them students.

Most of the fires, shootings and bombings occurred in the Oread neighborhood or in east Lawrence, a few blocks away from downtown.

Whole segments of the community, especially the elderly, weren’t involved or aware of the violence and protest under way, said Dick Raney, who was involved in city politics during the 1960s and owned pharmacies throughout Lawrence.

“They weren’t part of the action. It was almost like it happened in someone else’s town,” he said.

In early May 1970, just as tension in Lawrence started to cool, national events added more flames to the unrest.

Just days after the United States invaded Cambodia, the National Guard shot and killed four student protesters at Kent State University in Ohio. In response, KU students marched in protest and smashed out windows in the Military Science Building.

In hopes of quelling the violence and bringing the university back together, a crowd of more than 13,000 people filled Memorial Stadium on May 8. It was there that KU Chancellor Laurence Chalmers announced that students had the choice of going home early, finishing the semester or participating in school workshops and group activities.

To the students, Chalmers — known for his bow tie and pleas to just call him Larry — emerged as the hero of day. The compromise he struck held off any further campus violence that semester. But many around the state, including legislators, the Kansas Board of Regents and parents, criticized Chalmers for being too lenient with the activists.

“I think (Chalmers) probably had things figured out about right,” Shankel said. “If he would have tried to clamp down harder, I think things would have gotten worse instead of better.”

The tenuous peace that Chalmers established would last only a few weeks. As Lawrence entered into a dry, hot summer, the events of 1970 would take a deadly turn.