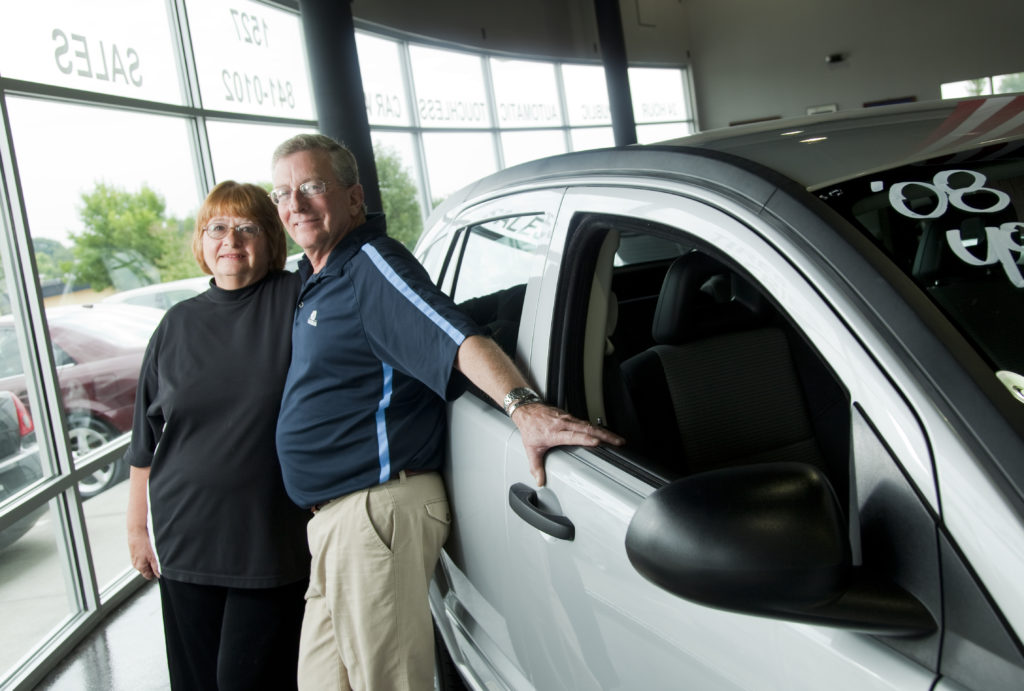 Lonnie and Joyce Blackburn, owners of Academy Cars, 1527 W. Sixth St., originally struggled with the idea of using Christian symbols in their business. 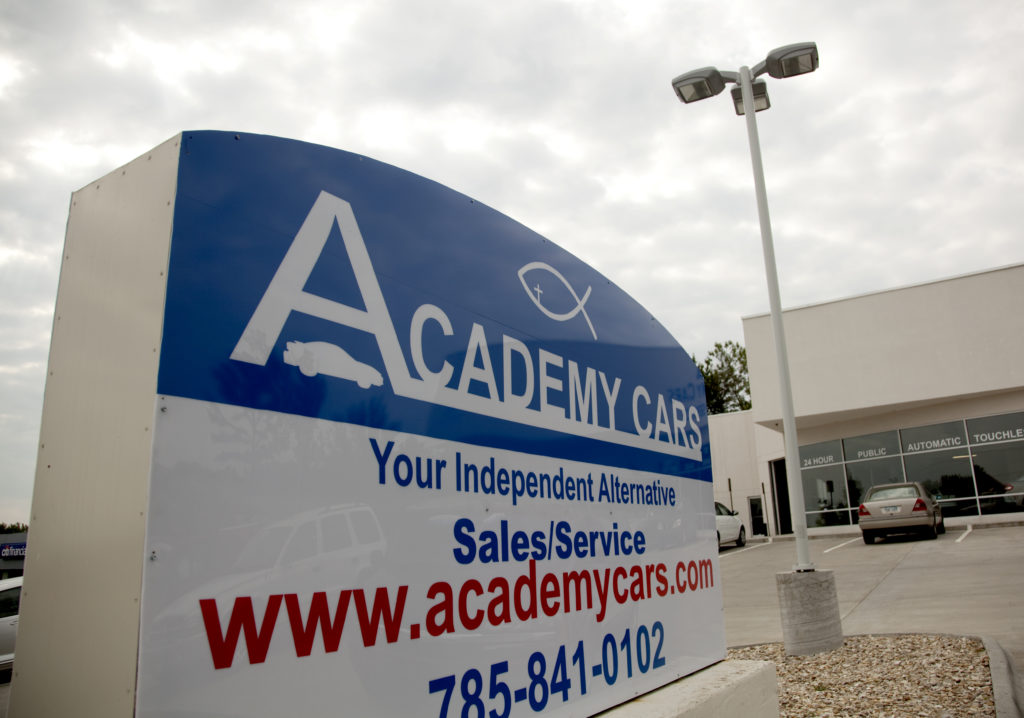 The blackburns have a large ichthys, also known as a “Jesus fish,” on their Academy Cars signage at the company’s new building, 1527 W. Sixth St.

Lonnie Blackburn put a smile on his face and left his office.

Always happy to assist anyone who comes to his Academy Cars lot, where the motto is “Bad things happen to good people, we can help,” Blackburn was pleased to meet with the man in his showroom asking to speak with the owner.

“I walked out and shook his hand and introduced myself and he said, ‘I just wanted to stop and tell you how much your sign offends me,'” Blackburn says. “And I said, ‘That’s amazing. I appreciate your input.'”

The sign in question was a large ichthys, also known as a “Jesus fish,” drawn in line with the Academy Cars handle at the company’s new building, 1527 W. Sixth St.

Ask Blackburn and his wife, Joyce, why they chose to put the large Christian symbol on the sign for the company they’ve owned since 1981, and it all goes back to the company motto.

“We just wanted people to know that there are Christian car dealers out there,” Joyce Blackburn says. “And it’s all in how we treat people, and we try real hard to help everybody and try to find a way to get people in cars.”

The idea of wearing one’s faith as part of a business model isn’t exactly a new concept. Companies both small and large have been doing it for a number of years, and some — such as Hobby Lobby and Chick-fil-A — have managed to work religious tones both publicly and privately into their successful company profiles.

And that faith can be good for a company’s bottom line, says Dennis Rosen, associate professor of business at Kansas University.

“Religion is one of the basic subdivisions within our culture, and it specifies certain belief systems and behaviors, and people like to associate with others of similar beliefs,” Rosen says. “And that’s no different than someone, let’s say, who has strong beliefs about the environment and therefore decides to buy from retailers that emphasize that they recycle everything and they have a small carbon footprint and so forth — similar belief system.”

The ways to display that belief system can run a gamut as wide as the range of companies that incorporate them. In Lawrence, not only is there Academy Cars and its sign, but there’s a dance studio, Dazzlers Christian Dance, that states its faith right there in the name.

Caryn Olyer, Dazzlers’ team director, says that when talking with the parents of prospective students, she is direct about the organization’s manifestation of its faith.

“When I’m talking to someone about Dazzlers, I always explain that we are Christian and what that means to them. And basically it’s not that we’re going to be teaching Bible stories to their children,” Olyer says. “We do pray with them … but the Christian element is more in the dancing, costuming and music of what we offer to the children more than doctrine.”

Other companies, especially ones that are regional, national or international, choose to be a bit more subtle, says Rosen. They don’t have the opportunity to talk with each individual client like Dazzlers’ directors can.

Small companies don’t have shareholders to deal with and can target a specific group of clients, such as those who share religious beliefs, he says.

“So you’re less concerned,” Rosen says. “If you’re a larger company, then it could be good, or it could be more restrictive.”

Case in point: Chick-fil-A, a fast-food restaurant with a Lawrence location on the KU campus. It doesn’t have Christian in its name or an ichthys on its sign, but it demonstrates the beliefs of founder Truett Cathy in other, quieter ways. Those include closing all of its businesses on Sundays and using Christian philosophy in the workplace.

“He believes that by applying biblical principles in the workplace, one could be successful,” says Jerry Johnston, Chick-fil-A’s senior manager of public relations. “However, we are quick to point out that we are not a Christian company.

“If you go into a Chick-fil-A restaurant, you will not see Bible verses on the wall or on our materials.”

Hobby Lobby, meanwhile, has links to its various ministry projects on the company’s main Web page and gives its commitment to Christian principles in its company statement of purpose, summing up its goals by saying: “We believe that it is by God’s grace and provision that Hobby Lobby has endured. He has been faithful in the past, and we trust him for our future.”

Vincent Parker, director of training and customer service for Hobby Lobby, stresses that though the company is based on Christian values, those values do not govern Hobby Lobby’s hiring practices or other business decisions.

“Yes, we are a company that is based and operated on Christian principles, but not all of our employees may have the same values,” Parker says. “We do not discriminate on our hiring practices. Plus, it is a chance to share Christ with those who have not accepted him as Lord and Savior. Hopefully, they get to see us (employer and customers who profess him) are different and not live by the world’s standard.”

That sharing can cut both ways, Rosen says. As easily as faith can cause an customer to pick a company based on religion or a characteristic associated with a particular faith, another can decide to steer clear for the same reasons.

“Individuals might also associate certain characteristics with such a business, so they might think that if they’re strongly religious that they might more honest or trustworthy, that might be a perception that they have,” Rosen says. “The downside is it can work in the other direction — you could end up losing people who don’t follow that belief system or feel that they are unwanted or being excluded.”

That was a major fear that Lonnie Blackburn had when Academy Cars added the fish to its logo.

“I really struggled with that, because of making your spiritual beliefs commercial,” Blackburn says. “You know, there’s some counsel in the Bible about that. And I finally reconciled it by talking with my pastor that we’re also not supposed to hide our beliefs. And that there are plenty of good Christian folks out there that would like to do business with good Christian folks.”

Blackburn estimates that 20 percent of people might chose his dealership based on his symbolically Christian sign, while 10 percent might drive on by for the same reason.

“The middle 70 are still looking for a fair value on a good piece of merchandise and service to back it up,” he says.

That’s why he believes he’s only had one instance of someone coming up and complaining about Academy’s ichthys since the company moved April 1 to Sixth Street from its former location on Four Wheel Drive. It was a move the Blackburns believe was an act of God after nine years of praying for an ideal location and the reason they felt compelled to share their faith so prominently.

That’s the case even if that means defending their faith once in a while — though Lonnie Blackburn isn’t really sure what he has to defend, and he told the offended car lot visitor such.

“I said, ‘I want to tell you about a comical thing that happened to me. My wife and I had a new navigation system and it didn’t know that the on-ramp to one of the highways in Dallas was closed and it rerouted us through the triple-X district. It was at 7 o’clock in the morning, and I drove by I don’t know how many offensive signs and prostitutes yapping at my car,'” Blackburn told the visitor. “‘And I didn’t think one time to stop and tell anybody how offensive that was to me.'”