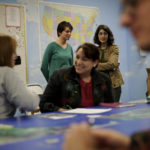 Shannon Gorres, pastor of Hispanic Ministries at Plymouth Congregational Church, standing at left, talks with teacher Rocio Sanchez Ares during an English as a second language class as a student and volunteer work together, in the foreground. Gorres started the program this year at the church.

At first glance, it may not look like much — about 20 people gathered in a small classroom on the second floor of Plymouth Congregational Church.

But if you listen closely, you can almost hear the sound of lives being changed.

“I visited the Russian art museum in Minneapolis in August,” student Nonna Tarkhova said in perfect English, with a thick Russian accent.

That one sentence is remarkable, given the fact that when Tarkhova first began attending the church’s free English classes in March, she didn’t speak a word of English.

The classes were the vision of 27-year-old Shannon Gorres, pastor of Hispanic Ministries at Plymouth Congregational Church, 925 Vt. The majority of people attending the classes speak Spanish as their native language.

“I’m very passionate about Latin American immigrants,” Gorres said. “A year ago, we found out from a survey that Spanish speakers’ No. 1 need was accessible English classes, so that’s what we wanted to offer.”

Gorres and her team of volunteers began offering the free classes on Tuesday and Thursday nights at the start of the year. She estimates about 60 different students have taken part. Enrollment is continuous, meaning anyone can stop by the classes at any time, but Gorres knows it’s difficult for students to walk through the door.

“Anybody who has started to study another language knows the difficulty there is in just grasping the basic sentence structure, and then beyond that I think there’s a challenge of feeling competent and intelligent,” Gorres said.

That’s where the volunteers come into play.

“We only ask that you be fluent in compassion and patience,” Gorres said.

A team of volunteers takes time each week to practice conversing with the English-language learners.

“I think it’s extremely important,” 73-year-old volunteer Graham Kreicker said. “Most of these people, if not all, are here to stay. Some are refugees, some are here because their spouse is at KU, and they really want to become integrated into the community. This is an opportunity to help them in a big way.”

Volunteers range in age from 16 to 82, and Gorres said they are always looking for more.

Meg Winchell, who speaks Russian, said she felt inspired to volunteer after the struggles her grandmother encountered trying to learn English in the early 1900s when she first came to the United States from Sweden.

“She went to a schoolhouse in the country and tried to learn, but the kids made fun of her. They laughed at her because she couldn’t speak English, so she quit,” Winchell said. “I thought, this is an improvement, and I’d just like to help other immigrants, too.”

“These classes are great because they afford us conversation practice,” Tarkhova said in Russian, using Winchell as her interpreter. “I know a lot of words, but I can’t say anything, but here we learn how to speak.”

And soon, Tarkhova said she hoped she would be able to say that in English.

Anyone interested in either participating in the classes or volunteering can send an e-mail to the English as a second language class coordinators at plymouthesl@gmail.com.