Gray-Little will receive about 25 percent more than Hemenway 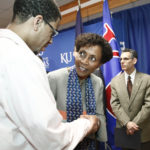 Newly appointed Kansas University chancellor Bernadette Gray-Little is welcomed by KU graduate Christopher Reine, Kansas City, Mo., on Saturday during Gray-Little’s introduction to the university community at the Kansas Union, 1301 Jayhawk Blvd. At right is Jeff Aube, who served as a member of the chancellor search committee and is a professor of medicinal chemistry at KU.

Bernadette Gray-Little will receive a maximum of $425,000 per year, compared with Hemenway’s state-approved maximum of $340,352. The state contribution to the salary, however, remains the same: $267,177.

The difference, then, must be made up by private funds from the Kansas University Endowment Association. For Hemenway, private donors chipped in $73,175 per year. For Gray-Little, private sources will provide $157,823.

In addition to her salary, $25,000 per year will be set aside in a deferred compensation fund for Gray-Little, funds that will only be accessible to her upon completion of her tenure as chancellor, Regents spokesman Kip Peterson said.

The salary package lands in the middle of KU’s “peer institutions,” as provided by the Kansas Board of Regents. University of Iowa President Sally Mason, a former KU arts and sciences dean, leads the group at $450,000 per year, while University of Missouri-Columbia Chancellor Brady Deaton brings up the rear at $287,973.

KU Provost Richard Lariviere is in line to make $425,700 annually as the incoming president at the University of Oregon, the regents said. Lariviere, however, is expected to receive $114,300 in deferred compensation.

When deferred and other compensation, including expense accounts, are figured in, Lariviere leads the pack at $540,000 per year, and Gray-Little continues to be in the middle.

At the University of North Carolina, where she has served as provost and executive vice chancellor, Gray-Little’s salary for the current academic year is $350,000, according to a Charlotte Observer salary database for university employees.