Looking back at La Yarda 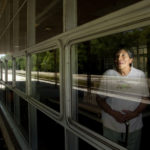 Lawrence resident Teresa Schwartz says she can remember picking mulberries and playing on the sand piles as a little girl just east of where the Santa Fe Depot is today. Schwartz, now 79, grew up in La Yarda, a community of Mexican railroad workers built in the mid-1920s that was destroyed in the flood of 1951. Photographs are currently on display in an exhibit at the depot.

There is a spot — behind an East Lawrence lot that stores city Dumpsters — where a path cuts into the woods.

Since the beginning of Lawrence time, it seems, this spot has been on the wrong side of the tracks. Today, the little patch of ground is sandwiched between the city’s sewage treatment plant and the Burlington Northern Santa Fe Railway line. Decades ago, its next-door neighbor was a slaughterhouse.

Slowly, and inconsistently, the larger city on the right side of the tracks creeps closer. On the nearby Poehler building — a tall, warehouse structure along the edge of the rails — “for lease” signs hang. The building has been touted by condo developers as the centerpiece of a new type of urban neighborhood — a live, work and play area, as they are called.

Proof that everything old is new again.

Val Romero knows this better than most. In his straw hat and long sleeves, the 82-year-old walks along the path for a few steps. He stops and slides his foot upon the weeds to uncover a sidewalk. A few steps more and he’s standing on a cement slab no larger than a modest West Lawrence driveway.

This slab, and another one just like it a few feet away, once served as the foundation for small, brick railroad-built houses. As a child, the Romeros and about a dozen other Mexican families — some with as many as 14 members — called this spot home.

They also called it La Yarda.

“It was a good place,” Romero said.

Today, it is a spot in the weeds. An orange tarp hangs from a tree to catch rain. Nearby a few tents share space with an old boat, full of tin cans.

The foundations are still visible to the naked eye, but what they once supported are an easily overlooked speck on Lawrence’s official history books.

“Growing up in Lawrence, you get the history of John Brown and Quantrill’s Raid, but that is where it stops,” said Brenna Buchanan, a third-year architecture student at KU who undertook a research project on La Yarda. “Nobody teaches or gets the word out about these other important things that happened here.”

Like the railroad. Who, these days, spends any time talking about the railroad in Lawrence’s history? But in the 1920s, the railroad was a lifeline for the community. And by and large, it was a group of Hispanic men in La Yarda who made sure the tracks stayed straight and true, Buchanan said.

So after hearing about La Yarda while doing an architectural survey in East Lawrence, Buchanan decided to study the area for a class project. Once she toured the site, she was hooked.

“The first time I came down here, you could just tell there was something about this place that was awesome,” Buchanan said. “There is no other place that you could be so close to downtown and be in such a wooded, serene place.”

In 1924, it wasn’t serenity that caused the Santa Fe Railway to build the La Yarda complex for its Lawrence labor crews. It was necessity — as railroading in post-World War I America reached its zenith and labor strife made demand for workers tight.

“They built places like this in order to have the railroad worker here throughout the year,” said Helen Krische, who as archivist for the Watkins Community Museum of History did an extensive study of the area several years ago. “Otherwise, the dad would come up here and work on the railroad for a while and then go back to Mexico to be with his family.”

In the end, what it took for those workers to put down roots in Lawrence were two U-shaped houses, a hand-operated water well, enough land by the tracks for a few chicken coops, and a beaten-down grass patch for the numerous kids to play basketball and baseball.

Teresa Schwartz, who moved to La Yarda as a child in 1933 and lived there for the next 18 years, remembers everyone had a flower garden, men shared crops of sweet corn and peppers, and women gathered together each week in the front yard to do washing. For Christmas, a neighborhood hog was slaughtered to make tamales.

Cramped, but happy. By most estimates, the two homes — each split into about five living units comprised of a kitchen and a bedroom — housed more than 50 people at a time.

Even by Great Depression-era standards, Krische said La Yarda was unique for how close-knit the neighborhood became.

“Basically, they had to depend on each other to survive,” Krische said.

“The river would flood all the time,” Schwartz said. “It would come up to the porch, but would never get in the houses. Then one day the Santa Fe men came and told us there was a big flood coming, but the men didn’t believe them.”

Not long later, Schwartz’s family fled, taking only their chickens with them.

“After that, we never went back,” Schwartz said. “It was just all mud.”

The families scattered. Some went to Topeka or Kansas City where higher-paying jobs awaited. Others, like Schwartz, did not stray far. She lived for years on Rhode Island Street and now lives in another part of East Lawrence, having never lived more than a handful of blocks from La Yarda.

Unlike other communities, Lawrence never again would have a neighborhood so steeped in Hispanic heritage. But both Romero and Schwartz said the Hispanic community in Lawrence remains close, if not concentrated.

“The church has held us together,” Romero said, which in these circles means St. John the Evangelist Catholic Church, 1234 Ky.

Buchanan said she thinks La Yarda, in its own way, has helped hold them together, too.

“For so long, they had the benefit of being able to work together as a community,” Buchanan said. “I really don’t think that benefit has ever stopped. That willingness to help each other out still exists.”

Schwartz said it was hard to come out of La Yarda without having that ethic.

“I know I learned at La Yarda how to treat people,” Schwartz said, “and how to love one another.”

Today, there are rumblings about what to do with this spot in the woods. Buchanan has inquired about the railroad donating the property to a nonprofit. Perhaps one of the buildings could be rebuilt or at least a marker placed on the site.

Others, like Schwartz, said they would be fine with the area turning into a more formal area for the homeless to stay.

“I really would like to see something down there for them,” Schwartz said. “That place did a good job of taking care of people for a long time.”

But Romero, who is one of the older remaining survivors of La Yarda, suspects not much will happen. La Yarda, he said, is a place for a different time. Even as the country goes through an era being labeled as the “worst since the Great Depression,” he doesn’t expect today’s neighborhoods to band together like La Yarda did.

“I think,” Romero said as he looked around at the brush and weeds that have covered the site, “nature has a pretty good foothold here.”