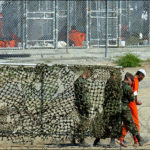 A detainee is escorted to interrogation by U.S. military guards at Camp X-Ray at Guantanamo Bay U.S. Naval Base, Cuba, in this March 1, 2002, file photo. Guantanamo received its first prisoners from Afghanistan in January 2002. A total of 770 detainees were sent there; its population today of Afghans, Arabs and others stands at 455.

A thorough study of where terrorist detainees should be held is needed before the Guantanamo Bay Detention Facility is closed, according to Kansas U.S. Sen. Sam Brownback.

Brownback, a Republican, introduced legislation Wednesday that would require President Barack Obama to notify Congress 90 days in advance before a closure. The president also would have to provide a review answering questions about logistics, security and alternatives.

Brownback said he is confident such a review would show that Fort Leavenworth isn’t an appropriate site.

“The base is not equipped to handle the transfer of Guantanamo detainees and there is still no answer on how to avoid commingling prisoners and detainees, which is against the law,” Brownback said in a news release.

Brownback has toured the fort’s U.S. Disciplinary Barracks several times. He also has invited Obama to join him in a tour. Obama hasn’t yet responded, Brownback spokesman Brian Hart said.

Prior to Obama taking office, Brownback spoke with Defense Secretary Robert Gates and other defense officials about the matter, Hart said.

“They said they very much understand his concerns but if the president tells them to jump, they’ll jump high and quick,” Hart said.

Brownback’s concerns were heightened by a recent ABC News report that the Department of Defense had prepared a list of sites that could be used to hold as many as 250 detainees, Hart said.

According to abcnews.com, in addition to Fort Leavenworth, other sites are Camp Pendleton in California, Marine Air Station in Miramar, Calif., and the U.S. Naval Consolidated Brig in South Carolina.

“We had heard of the study but had never heard locations other than Leavenworth,” Hart said.

The Fort Leavenworth prison is the only maximum security military prison. Its capacity is 512 and it generally has about 450 inmates. A second prison, expected to open next year, is being built for 483 minimum and medium security inmates.