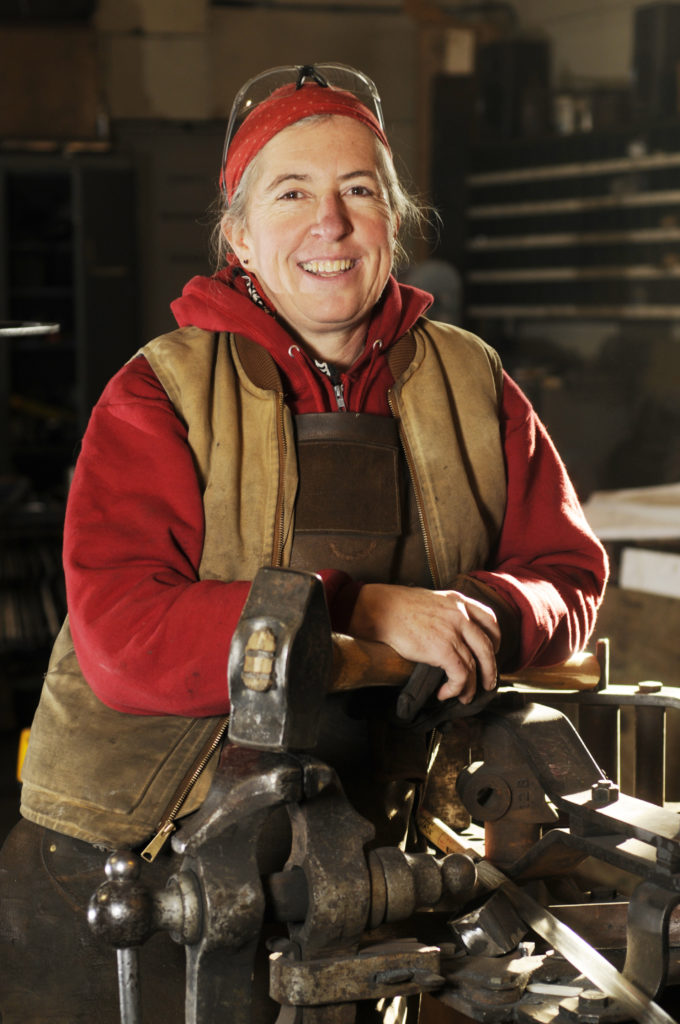 Kate Dinneen, 51, is extra cautious when doing blacksmith work. That’s because she uses her fingers and hands to play the string bass in the Topeka Symphony Orchestra.

When you think of a blacksmith do you imagine a large, heavilymuscled male? If so, you’ll need to adjust your image when you meet local blacksmith artist Kate Dinneen.

She’s among the country’s growing number of female blacksmiths, and was recently nominated to the national board of the Artist Blacksmith Association of North America (ABANA).

She has twinkling eyes, a slender frame, a bounce in her step and an adventurous spirit. She enjoys playing with fire and making sparks fly in her job.

She was born in Saigon, Vietnam, where her father was stationed as an Army translator. Her parents, both linguists, moved to Lawrence in 1958 for graduate work at Kansas University. They later spent periods in France and Spain where Dinneen attended school and learned to speak fluent French and Spanish.

The family returned to Lawrence when she was 12, and she discovered another talent.

“I started playing string bass because I was tall enough to hold it up,” she says with a laugh.

She doesn’t know where the gift came from, but she loves it.

“I played in the orchestra and symphonic bands at West Junior and Lawrence High, and at KU,” she says. “I’ve been playing with the Topeka orchestra for 15 years.”

She graduated in 1980 with a Bachelor of Liberal Arts and then worked in Lawrence’s food industry.

After an accident in November 1980, she took her twisted bicycle to “Rick’s Bike Shop” for repairs and met her husband of 22 years, Thomas Howe.

“Tom was Rick’s brother-in-law and business partner. We started chatting about bikes and cycling,” Dinneen remembers. “He invited me to start cycling with his male friends.”

They were surprised and slightly miffed when she started beating them in races. She became five-time state road racing and time trial champion, and was invited to the Olympic training village in Colorado Springs to prepare for the 1992 Barcelona Olympics.

“I was hit by another car in 1989 and sustained a bad hip injury. It ended my Olympic hopes,” she says.

She returned to being a chef and two years later a chance meeting (circa 1992) with KU linguistic graduate student Walt Hull brought another life change.

“Walt wanted to open an artist blacksmith business,” she says. “I told him I’d join him. We’ve been working together at Walt Hull Ironworks ever since.”

Dinneen, now 51, admits the change could have endangered her string-playing fingers.

“I wear a long-sleeved leather apron and strong leather gloves,” she explains. “If I feel the gloves getting hot, I know it’s time to stop.”

Her vigilance has paid off. She wields heavy hammers and anvils in the ferocious heat of the coal and gas forges but she’s never burned or damaged her hands or body.

Dinneen’s artistic iron work can be seen around Lawrence, including the gates atop the stairs at Teller’s Restaurant, Free State Brewery’s door handle and sign and the grill on the outside wall of Wheatfields’ oven.

She continues to learn and develop her craft. She spent a month working with Israeli blacksmith Uri Hofi and attends workshops and conferences whenever possible. With encouragement from dean John Gaunt, she and Hull teach classes at KU’s School of Architecture.

“One of the great things about artist blacksmiths is their willingness to share ideas and techniques,” she says. “There’s no such thing as guarding trade secrets like I experienced in the food industry. Older blacksmiths are glad their profession’s being revived. They want to ensure the craft is passed on to future generations. Serving on ABANA’s board enables me to contribute to that.”