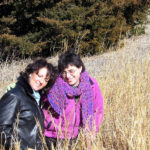 When Kelley Hunt and Caryn Mirriam-Goldberg get together to write songs, there is no pressure.

“That’s the cool thing about writing with her,” Hunt says. “There are no parameters or boundaries. We just write what we write on a given day.”

The pair — Hunt is a well-known R&B musician, Mirriam-Goldberg the state’s poet laureate — have been writing songs together since 2003, when they were asked to write a tune for a breast cancer awareness event.

Their latest joint effort is “Landed,” a book of poetry by Mirriam-Goldberg that includes a CD of her reading some of her poems and four tracks of Hunt performing songs they co-wrote.

The duo will read poems and perform songs during an event at 4 p.m. today at the Lawrence Public Library.

“I look a lot at the whole idea that as we get older, we find some of the ways we thought the world works are not the way the world works,” Mirriam-Goldberg explains.

That involves shedding non-important material items and getting back to the basics, she says.

With the “Landed” book and songs out of the way, Hunt and Mirriam-Goldberg are continuing to work on new songs for upcoming CDs. Three of the songs on Hunt’s latest CD, “Mercy,” were co-written with the poet laureate.

“I think there are a lot of parallels,” between their two crafts, Hunt says. “I think a lot of it is just being open-minded and knowing your craft really well. We just throw lines out. We’re not in a pressure cooker to write.”