John Beal - Special to the Journal-World 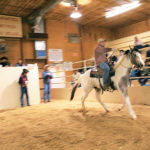 A horse parades around the arena at Campbell's Sale Barn near Linwood. The barn has been the site of a weekly horse auction for the past 22 years. For a variety of reasons, the bottom has fallen out of the horse market.

Linwood ? Still shaggy in its winter coat, the colt pirouetted, almost daintily, in the wood shavings on the arena floor.

Its rider and owner, Pat Saffer of Melvern, deftly guided the horse, turning first this way and then that, showing how it responded to gentle inputs with the reins.

Although Saffer would say later that the young chestnut was no great shakes as a horse, to the untrained eye the horse and rider presented a momentary picture of the almost mythical union that they say occurs between a man and a horse.

Then auctioneer Brandon McLagan rapped his gavel to start the proceedings, and any such romantic notions were shattered.

It was Monday night at the horse sale at Campbell’s Sale Barn east of Linwood, and the bidding was under way – well, sort of.

Horses are not a hobby for Saffer. He and his wife, Jennifer, run about 50 head on a 400-acre ranch near Melvern.

But for Saffer on this night, the young chestnut wasn’t able to generate much interest among bidders. The horse brought only $130.

A couple of years ago, Saffer said, that horse probably would have brought $400.

And so it continued until about midnight, as 42 head of horses and mules went under the gavel. The highest price given for any of the animals was $1,200 for a quarter horse gelding, said sale barn owner Everett Campbell.

That’s a far cry from prices of just a couple of years ago, horse sellers say. For a variety of reasons, the bottom has fallen out of the horse market.

Several factors are at play – the price of feed and hay, for example. Rising interest in ethanol production has driven up corn prices, and boarding and pasturage costs also have risen.

But the chief reason, many sellers say, is that animal-rights advocates forced the closure of slaughterhouses in Texas and Illinois that formerly kept prices higher.

In 2006, the last year they were in full operation, horse slaughter plants in DeKalb, Ill., and Dallas and Fort Worth, Texas, killed 100,800 horses, processed the meat and sent it overseas for human consumption, much of it to France.

After years of campaigning by animal-rights advocates such as the Humane Society of the United States, the plants were closed in 2007. In Texas, the Fifth U.S. Circuit Court of Appeals stood by its January 2007 ruling that upheld a state law banning the sale of horse meat for human consumption. The law had been enacted in 1949 but never enforced.

The Illinois plant was closed in March 2007 after a judge ruled it illegal for the plant to pay the U.S. Department of Agriculture for inspection costs. Congress eliminated funding for the inspections in 2005. Later in 2007, Illinois also passed a law prohibiting the sale of horse meat for human consumption.

‘Back in the day’

Without that floor, there is almost no bottom to the market.

Witness the $130 for Saffer’s first horse. He didn’t consider that price an adequate recompense for the hours he spent training the animal, but of even greater concern was his next commission, a 2-year-old paint quarter horse gelding, similarly trained, that sold for $460.

The market is flooded with unregistered, worthless horses, Saffer said. Most of the animals at Monday night’s sale should have gone to slaughter, he said.

Campbell, owner of the Linwood sale barn that was the site of a horse sale almost every Monday for the past 22 years, agrees that the quality of the stock offered for sale is down.

The closure of the slaughter market is partly responsible, but is only one factor, Campbell said.

“It’s fuel prices and grain prices that’s hurtin’ everything – not only the horse market, but everything in general.”

Occasionally an animal comes through that generates attention.

A horse at a recent sale sold for $4,000, Campbell recalled.

Other nearby horse sales are in Salina and Tulsa, Okla.

Hay and grain prices have risen considerably, as have costs for boarding.

At one area facility, boarding costs have risen from $425 to $475 a month in two years. Pasturage prices are up as well. Costs at Oakridge Farm in Shawnee Mission Park have gone from $150 a month in 2005 to $165 a month today.

The debate over the closure of the slaughterhouses goes to the bone in horse country, and it is a debate that centers on the relationship between a horse and its owner.

“A horse is a livestock animal,” Bob Saffer said.

And, although horse prices are down, that’s not bad news for everyone, Dwyer said.

“It’s a good time to buy a horse right now,” she said.