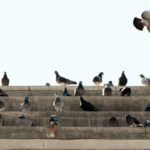 Pigeons gather at the Reno County Courthouse in Hutchinson. Business owners in the city were fed up with the hazards of droppings and hired a pest control firm to curtail the pigeons. The pest control firm baited the birds with poisoned corn to decrease the pigeon population.

Hutchinson ? The experts agree: There are definitely more pigeons in Hutchinson these days.

And with the increased population comes increased problems related both to public health and property maintenance.

Pigeons plague the Reno County Courthouse, several churches and most of the downtown area.

Many people are resigned that pigeons are a natural addition to any tall building, but some Hutchinson business owners are taking a stand.

Advance was hired by a coalition of business owners – who have remained anonymous to The Hutchinson News – who sought to reduce the pigeon population downtown because of health concerns and property damage.

In the baiting, toxic corn was strategically placed about the downtown area.

The birds who eat the bait eventually die but first display intoxicated behavior.

“Basically, this behavior is a stress signal to the other birds, which leave the area because they sense that something is not right,” said Jeff Wells, vice president of Advance. “So it results in a great reduction in population in a specific area because of the birds who take a toxic dose as well as the repellency issue.”

The baiting has resulted in a reduced population of pigeons downtown, but Wells said he has noticed that there are more birds roosting on nearby buildings that weren’t baited.

Pigeon droppings aren’t just a nuisance or an extra chore for property owners. Because they are acidic, they actually cause property damage, eating through metal and deteriorating signs and other metal objects at a rapid rate.

The biggest problem, though, comes in cleaning the droppings.

Pigeon fecal matter is a breeding ground for a spore called histoplasmosis, which can cause an infection that leads to respiratory disease, according to the Centers for Disease Control and Prevention. The infection, if it affects other organs, can be fatal if untreated.

Workers cleaning up the droppings cause histoplasmosis spores to become airborne and are infected when they breathe them in.

Pigeons are also known to carry or transmit pigeon ornithosis, encephalitis, Newcastle disease, cryptococcosis, toxoplasmosis, salmonella food poisoning and several other diseases, according to the Kansas Department of Wildlife and Parks.

For that reason, the Kansas Department of Agriculture files the use of certain pigeon-control products under the category of public health and safety.

It’s a problem not lost on local businesses.

Next week, workers trained in safely removing pigeon waste will clean piles of pigeon droppings from the Fox Theatre marquee, which is being eroded by the waste, said board president Greg Payton.

Payton added that some theater employee illnesses have been blamed on the droppings.

Pigeons are not protected by Kansas law, meaning property owners are free to dispose of them as they wish, Wells said.

But until the recent baiting, little has been done over the past seven years to control the pigeon population, which has led to the increase Hutchinson is seeing now, Wells said.

“The population has definitely increased,” Wells said. “There’s no question about that.”

“These birds breed so quickly that the population explodes when nothing is done to limit them,” Wells aid.

Even some pigeon enthusiasts seem to understand the need for the population control.

“I don’t know the real solution,” said Mel Voth, a Garden City man who raises homing pigeons. “There are ways to divert them to other places, but I think a lot of folks feel like the baiting is the easiest way to reduce the population.”

Wells said there will always be a struggle between people who want pigeons eliminated and those who believe it’s wrong to kill them off, but he believes there can be a healthy compromise.

“Ultimately, we are trying to protect public health and safety, not eliminate a species of birds,” he said. “I place the safety of my kids above the population of pigeons. When the population reaches a certain point, it becomes an issue and something needs to be done.”