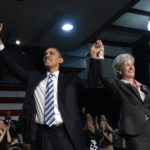 Topeka ? After weeks of speculation, Gov. Kathleen Sebelius announced Saturday she doesn’t want to be considered for a Cabinet position in President-elect Barack Obama’s administration.

Sebelius said she made the decision because of the worsening budget problems facing Kansas.

“The possibility of joining President-elect Obama’s team is exciting and compelling, but my service to the citizens who elected me is my top priority in these difficult times,” she said in a three-sentence statement released to the media.

During the summer, Sebelius was a top contender for vice president in Obama’s White House bid and was one of the co-chairs of the Democratic National Convention. Seen as a Democrat who could reach out to Republicans, Sebelius had been steadily gaining stature in the Democratic Party.

Obama selected U.S. Sen. Joe Biden, D-Del., in the end, but Sebelius continued playing an important role during the campaign as she criss-crossed the country to make speeches on Obama’s behalf.

Meanwhile in Kansas, state revenues started to nosedive along with the economic downturn. Lawmakers will face a $147 million deficit when the 2009 legislative session starts next month and a possible $1 billion shortfall in the next fiscal year.

The budget problems have already caused cuts in social services and prompted proposals to roll back recommended increases for public schools and reductions in higher education.

“Given the extraordinary budget challenges facing our state, and my commitment to continuing the progress we’ve made in Kansas, I believe it is important to continue my service as governor of the great state of Kansas — a job that I love and have been honored to hold,” Sebelius said.

News of her decision was met by skepticism by Kansas Republican Party executive director Christian Morgan.

“Surprising, considering the countless days and hours she wasted outside the state on behalf of Obama,” Morgan said. “It seems there is more to this story. Just weeks ago she said she would serve if asked. Has she been asked? If not, why not, considering the time she spent on the campaign trail.”

Nicole Corcoran, a spokeswoman for Sebelius, declined to comment beyond the governor’s statement.

Burdett Loomis, political science professor at Kansas University, who worked in the Sebelius administration for a year, said he believed Sebelius was being vetted for several jobs in the Obama administration.

He said Sebelius probably took herself out of consideration because the right Cabinet position wasn’t in play, and she didn’t want to leave the state amid the financial crisis.

“Sometimes, you need to take people at their word,” Loomis said. “We are in a really tough crisis, and the governor has gone through six budget cycles, and budget director (Duane Goossen) has gone through nine. If anyone can get the job done, it’s Kathleen.”

If Sebelius had left, it would have elevated Lt. Gov. Mark Parkinson to the governor’s job, a former Kansas Republican Party chairman whom she recruited to the Democratic Party.

Sebelius’ decision also opens up speculation about her intentions for 2010. She is term-limited as governor, but Democrats would like to see her run for Senate for the seat that is expected to be vacated by U.S. Sen. Sam Brownback, R-Kan.

U.S. Rep. Jerry Moran, R-Hays, has indicated he plans to run for the seat, and U.S. Rep. Todd Tiahrt, R-Goddard, has said he is considering it.

State Republican Party official Morgan said a Sebelius campaign for Senate would be a “fruitless venture.”

Loomis said he didn’t know whether Sebelius would run for the Senate. He said she may end up working in the Obama administration after all. “There are always Cabinet shakeups. This wasn’t the last bus leaving the station by a long shot for Kathleen Sebelius,” he said.