'Big Time' linebacker hopes to live up to nickname 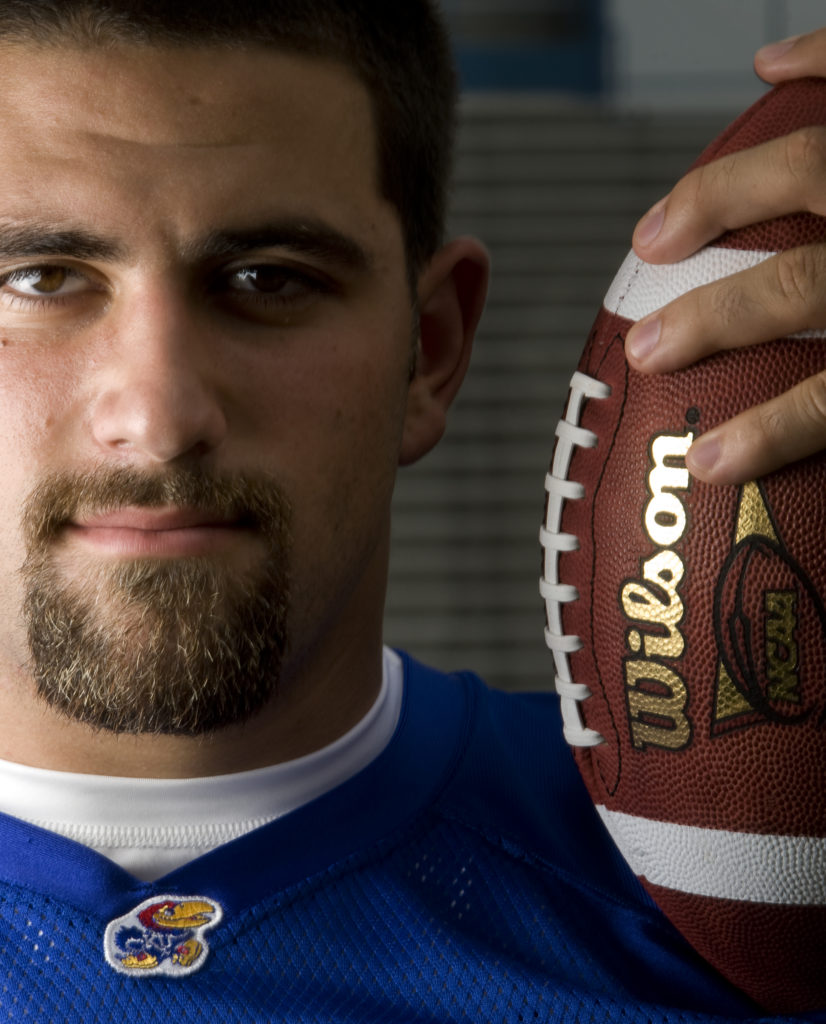 Linebacker Mike Rivera is eager for the start of his senior season at Kansas University, and he won't have long to wait: KU will open Saturday at home against Florida International.

They come up with nicknames for guys like Mike Rivera, usually something like Freight Train, The Animal or Mad Dog.

In fact, he has more nicknames than most. He has been called The Italian Stallion. That one’s near and dear to his heart. Two years ago, when he let his hair and beard grow wild, they called him Caveman. He still smiles when he hears that one. And some of his teammates even call him Mr. Kansas, homage to his Sunflower State roots and all-state efforts during his prep career.

In some manner, Rivera has earned every one of the monikers. But the latest – and this one’s a doozy – might be the best of all.

Not bad. Certainly true. Fitting even outside of football.

Already finished with his communications degree, Rivera enters the fall semester focused on football and an internship within the KU athletic department. In the spring, he’ll begin work on his masters degree – when he’s not focusing on his NFL future.

This April, a Shawnee Mission Northwest High teammate of Rivera’s was taken in the NFL Draft. Ryan Torain, who played collegiate ball at Arizona State by way of Butler County Community College, was picked by the Denver Broncos in the fifth round.

“That guy’s one of the best athletes I’ve ever been around,” Rivera said. “I wasn’t surprised at all. It was awesome.”

Asked if Torain’s fate raised his own hopes for an NFL future, Rivera, a senior linebacker, was honest.

“Sure,” he said. “You think about those things, but right now I’m focused entirely on things at KU and my senior season.”

That starts Saturday when Rivera and the Jayhawks welcome Florida International to Memorial Stadium for a 6 p.m. kickoff. After appearing at Tuesday’s news conference with his right knee lightly wrapped, Rivera was asked if he was healthy and prepared to play.

For Rivera, Saturday’s opener means a little more than it might to most of his teammates. For starters, it’s the beginning of the new era of Kansas football, one in which big-time expectations are warranted and fan interest is at an all-time high. The reality around him mirrors what he saw on the horizon when he chose the Jayhawks over other Div. I programs.

“I grew up in Kansas City. I’m a Kansas boy,” Rivera said. “I came to KU not knowing what to expect. I saw Kansas on the rise. We started getting better each year, and, now that we’re finally a good, competitive team, it’s exciting. That’s the whole reason I came to KU, was to play in big games every year.”

More than that, though, Saturday’s game means the beginning of the end of his time with the program he has helped fortify.

“It feels awesome,” Rivera said. “It’s my last season, and I want to go about things the same way as I always have, but at the same time, every day is my last day here at Kansas, and I want to take advantage of it.”

As a junior, Rivera helped form the heart of the KU defense. He was third on the team in total tackles (96) and finished with three sacks and an interception. A year earlier, he cemented his place as a legitimate Big 12 linebacker by recording 90 tackles as a sophomore.

Native Kansans tend to hold a special place in the hearts of KU football fans. A standout senior season could leave Rivera being revered for decades the way in-state greats such as Nolan Cromwell, Bobby Douglass, John Hadl, John Riggins, David Jaynes and the late Otto Schnellbacher still are.

Rivera’s 90-tackle seasons only furthered what many already knew about the man voted by teammates as KU’s most competitive player.

“I think (I knew) right away,” senior offensive lineman Ryan Cantrell said. “Being from Texas, you think Texas football is God, but there are great athletes everywhere, and Mike’s a great example of that. He’s a tough, hard-nosed guy, and he’s shown that since Day 1.”

His toughness never has been doubted. At Shawnee Mission Northwest, Rivera left those who watched him play marveling at his relentless style.

“You knew he was going to be special,” said Lawrence High coach Dirk Wedd, whose team played against Rivera in the Sunflower League. “The thing that jumped out at you was how hard he played. His motor just never stopped, he never took plays off. That’s rare at the high school level. Kids don’t always have that kind of mentality.”

“Mike Rivera is quietly confident,” Mangino said. “(He’s) not a big rah-rah guy, but just watching him grow from two years ago, he was apprehensive at times and was just learning his way. Now you see him, how he operates, you just love to see kids mature that way and really play to their full potential.”