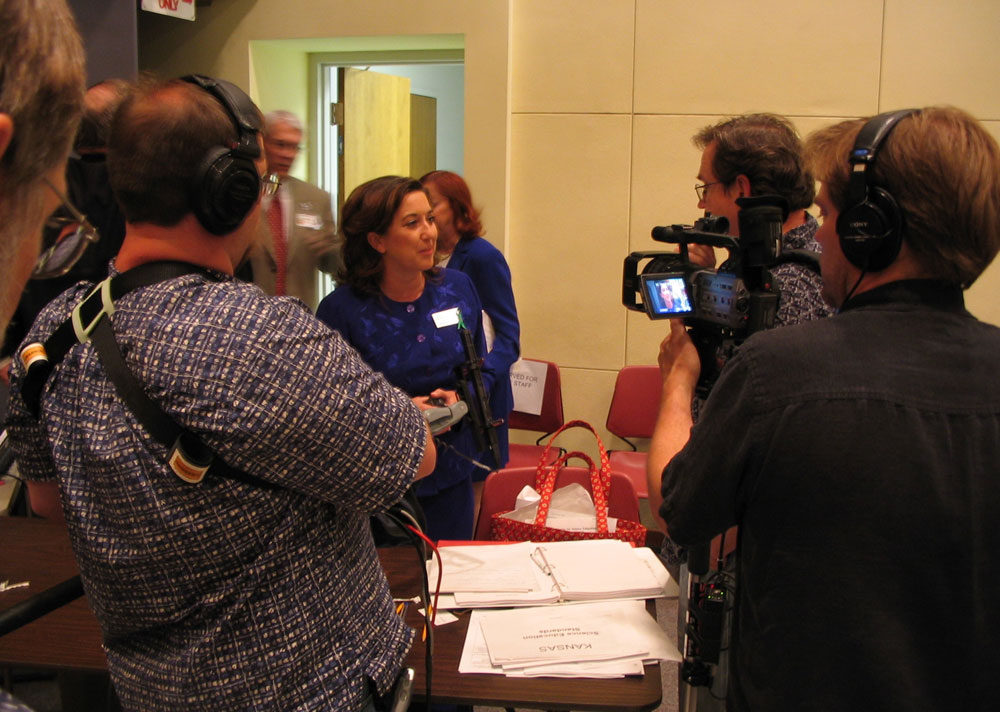 In the beginning, God created controversy.

And filmmaker Jeff Tamblyn was there to cover it.

To clarify, this particular “beginning” took place in 2005 when three members of the Kansas State Board of Education – Steve Abrams, Kathy Martin and Connie Morris – conducted controversial hearings to debate where God belonged in the classroom. Specifically, in what ratio should evolution and intelligent design be implemented into the state’s school science standards?

“When we started the project and began to talk about it, the reception we got was chilly,” says Tamblyn, who directed, produced and co-wrote the enterprise.

“One of the first things that everybody asked us was, ‘Which side are you on?’ In fact, that may eventually become a tagline for the movie.”

The subject proved no mere paper vs. plastic debate. The filmmakers became submerged in a core issue as culturally divisive as abortion or the invasion of Iraq.

“Even within families you see these big splits. I think some people can grasp evolution and it doesn’t bother them. But almost everybody I talk to who doesn’t like evolution, they just don’t cotton to the idea that they come from a lower form of life. For some people it might indicate that they are not special,” Tamblyn says.

More than 135 hours of footage later, Tamblyn started assembling the film with the help of co-writer/editor Mark von Schlemmer.

“It was a long process,” von Schlemmer recalls. “We had to figure out what the real story was. The charm of documentary filmmaking is that you can’t really know for sure what you’re going to get until you get out there, interview everyone and then look at what you shot to figure out what they’re saying.”

That long process turned out to run even longer.

“We thought we were done with the film a little over a year ago,” Tamblyn says. “We sent it out to some festivals like Toronto and Telluride, and it didn’t get in. But this prompted me to take another look at the story. I felt like we could make a better movie.”

The first editing revision turned out to be a metaphor for what sparked the initial controversy.

“We took out a lot of the science,” Tamblyn explains.

“There was a lot of stuff in there about cells and molecular biology. It was over people’s heads, and they were going to sleep. Instead, we really zeroed in on the politics and the politics of faith.”

Nearly a year and a half since the first festival edit floundered, “Kansas vs. Darwin” is making its official premiere Monday at the Kansas International Film Festival.

“Each year I find that the one subject that I think, ‘Who cares?’ or ‘I’ve already heard enough about this’ winds up being a film that is so well-made and interesting, it overcomes my initial skepticism,” says Dotty Hamilton, vice president of programming at the Kansas International Film Festival. “Last year we had an entry about asparagus. I thought it sounded stupid, but it wound up being one of my favorite films of the festival. It was also one of the highest ranked by the audience.

“The audience ultimately decides which films they want to see. Based on advance individual ticket sales, right now ‘Kansas vs. Darwin’ is leading the pack in audience interest.”

Part of the appeal is that for being such a quintessentially Kansas event, the three-day hearing courted national interest.

Journalists from all over the world kept tabs on the melee that pitted John Calvert, director of the Shawnee-based Intelligent Design Network, and Pedro Irigonegaray, a Topeka attorney who supported pro-evolution science standards.

Although the religious side was in full force during the hearings, the Kansas Citizens for Science decided to stage a boycott. Their reasoning was that science is not something that can be determined in the courtroom.

“The average viewer may see the movie as filled with heroes and villains. But my viewpoint is it’s filled with human beings,” says Tamblyn, a 27-year veteran of corporate film and video production.

“Some people – depending on their viewpoints – might find Connie (Morris) really detestable. I didn’t think she was detestable, I just thought she was trying too hard. I would say the same thing about most of the people involved in this. They’re scurrying and bellowing to make their point because they’re afraid the other side is going to get ahead of them.”

The filmmakers are hoping “Kansas vs. Darwin,” which was shot on digital video for under $200,000, is strong enough to land a national release.

“We’d love to get theatrical distribution for it. It’s not a flashy film – there are a lot of talking heads. But the content of it is pretty gripping,” says von Schlemmer, a Kansas University doctoral student in film studies.

“The reason I made the movie – to be blunt – was to make some money,” Tamblyn adds. “Of course, I’m real interested in this topic. But through our research we’ve learned the way you make money with a documentary is primarily through DVD sales – unless you’re Michael Moore or you have a lot of penguins in your movie.”

Tamblyn is pleased to finally be debuting the official finished version of the picture at the Kansas International Film Festival, which allows most of the people involved in the story the opportunity to attend.

He says, “There are 10 major characters in the film, and they’ve all been invited to the screening. So far none of the people on the creationist side are coming.”