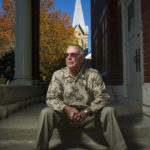 Joe Reitz, a retired Kansas University business professor and consultant with the Leo Center, is attempting to gain interest from local churches for a new program called Interfaith Hospitality Network.

A meeting about the Interfaith Hospitality Network is scheduled for 7 p.m. Nov. 27 at First Christian Church, 1000 Ky. For more information about the program, e-mail Joe Reitz at joe@ leocenter.org.

Several months ago, Joe Reitz heard the story of a pregnant Lawrence woman who also had one young child.

She didn’t have a place to stay, and she was seeking help at the LEO Center, a multichurch ministry that assists the poor.

“The comment she made was, ‘Is there no room for me in Lawrence?'” says Reitz, a retired Kansas University business professor and consultant at the center. “It reminded me of a story I’ve heard since I was a kid. ‘No room at the inn’ was what it reminded me of.”

He’s referring to the biblical story of Mary and Joseph trying to find a place for Mary to give birth to Jesus.

So Reitz, who is stepping back from his involvement at the Leo Center, started researching faith-based programs that provide relief for homeless families.

What he found, he hopes, will be the start of a multichurch, multifaith effort to address the needs of homeless families in Lawrence.

It’s called the Interfaith Hospitality Network, part of the New Jersey-based group Family Promise. Its model for helping homeless parents with children has been replicated 139 times around the U.S., and it boasts impressive results – it says 80 percent of those who entered the program last year ended up in permanent housing.

“So many people are right at the margin,” Reitz says. “They’re doing all right, and then they’re injured, laid off or their car falls apart, and all of a sudden they’re in dire straits.”

The program works this way:

Churches sign up to house homeless families in their buildings overnight. An ideal number is 13 churches, so no one congregation plays host more than once a quarter. (Other churches are recruited to provide volunteers and financial support.)

Homeless families are selected through a screening process that includes making sure there are no substance abuse issues that need to be dealt with.

They arrive at the church each evening and receive a meal prepared by church members and volunteers. Volunteers then stay with the families through the evening, socializing and providing tutoring for children. Then, two volunteers stay with the families overnight in a room at the church, either using existing cots or portable bedding provided by Interfaith Hospitality Network.

During the day, the children go to school – Reitz says federal law requires school buses to pick up homeless children wherever they’re staying – while their parents go to the headquarters for the local Interfaith Hospitality Network. They’re transported there by a 15-passenger van provided by the network, meaning the program can house no more than 14 people at any time.

Those who are employed also are required to put half of their earnings in a savings account to pay for housing.

“I think probably the biggest strength of the model is volunteers,” Dercher says. “They’re able to lift up their brothers and sisters through their faith community – their church of origin – where they worship. They’re able to give back.”

Because of the federal grants the program receives, Dercher says volunteers aren’t allowed to evangelize.

She says the program addresses many areas of need for homeless families. In addition to job training and apartment- or house-hunting, the program helps tell families about other resources in the community, such as food pantries, that are designed to help them.

Some families do drop out because of strict requirements, she says. But those who truly want help persevere.

“I always say we’re not a Band-Aid for a hemorrhage,” Dercher says. “The biggest key to success is motivation for change, and realizing they didn’t get into their situation overnight, and they’re not going to get out of it overnight.”

‘Not the whole picture’

Reitz and a representative from the national Interfaith Hospitality Network spent a week in October talking to Lawrence and area pastors about the program. Reitz says he was pleased with the response.

“I kept asking, ‘What’s wrong with this plan?’ and I couldn’t come up with anything,” he says.

One of the pastors he talked with was the Rev. Tom Brady, senior pastor at First United Methodist Church, 946 Vt. Brady says he was involved in a similar program in Denver.

“I saw it work,” Brady says. “I think it has great potential to work here, if people are up to it – it takes a huge number of volunteers.”

His only question is whether there’s enough need for homeless families in Lawrence to make it worthwhile to establish the framework.

“I’m optimistic that our church would want to do it,” he says. “You don’t have to do it every week of the year. I’m supportive of it. It sounds like a good ministry.”

Loring Henderson, director of the Lawrence Community Shelter, says he’s aware of Interfaith Hospitality Network and that it has a good reputation nationally.

But he says addressing the needs of homeless families will not take care of all homeless issues in Lawrence.

“I’d say it’s part of the picture,” he says. “It’s not the whole picture. It’ll be the cream of the crop, the most cooperative who will not be trouble for landlords.”

Steve Ozark, coordinator of the Lawrence Community InterFaith Initiative, says he welcomes another faith-based program to address homeless concerns. The LCII is working on a pilot project called Home-Makers, which would provide ongoing support for the chronically homeless, especially those with mental disabilities.

“I think it’s a wonderful idea,” Ozark says of the Interfaith Hospitality Network. “I think that’s a different group of people. It seems to be a very good complement.”

Reitz is organizing a meeting later this month to talk about the Interfaith Hospitality Network, answer questions and gauge support. He agrees that the program would not end homelessness in Lawrence, but rather would help one segment of the population.

It also would help churches, he says.

The program will require securing a site for a headquarters facility, with 3,000 to 5,000 square feet needed. Startup costs are projected to be around $80,000, with eventual annual operating costs of around $150,000, Reitz says.

“That, to me, is not very much money,” he says. “From a business perspective, it’s really cost-effective.”

Reitz is hoping there’s enough interest to start the ball rolling, in order to have first guests staying at churches by fall 2008.