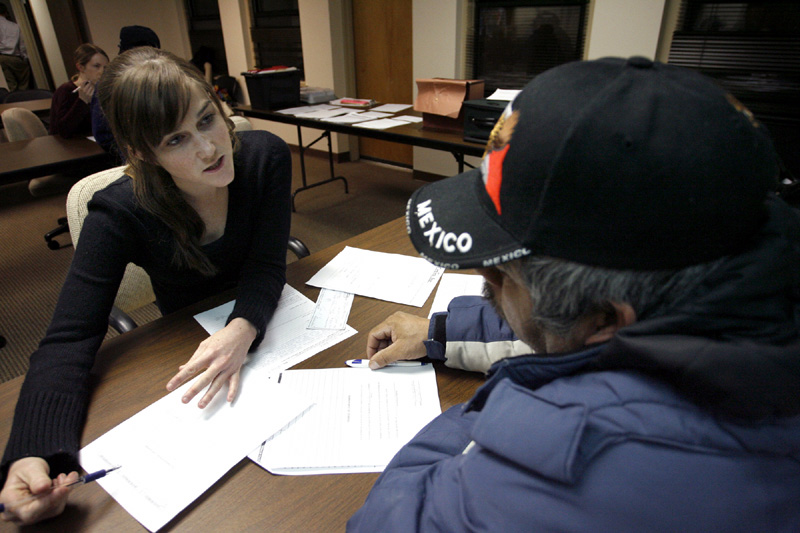 Volunteer Ellen Ritchie, left, helps a Hispanic worker fill out paperwork in an effort to collect unpaid wages from an employer in Kansas City, Kan. The Kansas City Worker Justice Project helps workers collect wages, and, if that fails, helps workers write complaint letters to the U.S. Department of Labor.

But he said he has received nothing for the 160 hours he worked over a three-week period in September and October.

So recently, with the weather bad and construction jobs hard to find, Perez and two co-workers met with volunteers with the Kansas City Worker Justice Project, one of a growing number of nonprofit groups seeking to collect unpaid wages for immigrant workers.

Social service agencies report a rampant problem of wage theft in industries that employ large numbers of Hispanics. They say many undocumented Hispanics don’t protest when they aren’t paid because they fear deportation.

Perez, 47, of Kansas City, Kan., is counting on the volunteers to help him collect at least some of the $3,200 he figures he is owed. So far, all he has to show for his efforts is a bounced check for $520.

Still, the bounced check was helpful. It included the name of the company and its address – details many workers are unable to provide.

Natalie Chalmers, a law student at Kansas University, spent part of her evening trying to help translate and fill out paperwork for a worker who knew his employer only by his first name: Scott.

“They usually don’t know what we need them to know,” she said.

Volunteers like Chalmers help the workers write letters to their employers, and if that fails, they file complaints with the U.S. Department of Labor.

Soon, the group may begin taking the cases to court. But David Grummon, an attorney who represents Hispanic clients in the Kansas City area, said an array of issues makes these types of cases tricky to litigate.

Sometimes employers misclassify their workers as “independent contractors” or employ them through an intermediary subcontractor – often nothing more than a Hispanic worker with a valid Social Security number who hires a crew of undocumented Hispanics, keeps track of the hours they work and pays their wages.

Because such workers aren’t afforded the same labor protections given to other employees, unpaid-wages cases are handled as contract disputes. And Grummon said those contracts are almost always verbal.

“They can always come back and claim, say our understanding of the agreement was this, but the guy didn’t speak very good English,” he said.

Even people opposed to illegal immigration have a reason to care about the problem, said Annette Bernhardt, co-director of the Economic Justice Project at the Brennan Center for Justice at New York University School of Law.

“These laws, like minimum wage, are the core standards we have set down that define the floor for our labor market,” she said. “When we let employers consciously decide to violate those laws, it threatens standards throughout the entire labor market, not just for those workers.”

She said there are no national figures on how many workers have been robbed of wages, though individual groups have conducted their own regional studies.

El Centro’s own recently released survey of 828 foreign-born Hispanics in the Kansas City area found that 16 percent from urban areas and 11 percent from suburban areas had worked without pay.

“Everything we hear from community groups, immigrant worker centers, and the workers themselves is these practices are becoming widespread in low-wage industries, and the resources among nonprofits are clearly not enough to meet the need,” she said.

Her research found enforcement actions taken by the U.S. Department of Labor decreased 36 percent from 1975 to 2004. Over the same period, she found the number of workers covered by wage-and-hour laws grew by 55 percent.

Rebecca Smith, coordinator of the immigrant worker program with the National Employment Law Project, said the enforcement burden has been shifted to nonprofits and the nation’s more than 140 worker centers – places where low-wage workers gather to find work.

“Government has stepped down and worker centers have stepped up, and government needs to step up,” Smith said.

Casa de Maryland, in Silver Spring, Md., is among the most aggressive of the day labor centers. The nonprofit, which operates three day labor centers in suburban Washington, recovered more than $200,000 in unpaid wages during the 2006 calendar year.

“There is an exaggerated level of labor violations against immigrant workers, and so we’ve decided as a sub-component of doing labor work in immigrant communities, you have to take a somewhat ferocious approach to bad actors,” said Kim Proteack, advocacy director at Casa de Maryland.

The group had one lawyer operating out of the trunk of her car and filing small claims against employers when it branched into the day labor market in 1991. Now the group has three full-time attorneys who file wage claims.