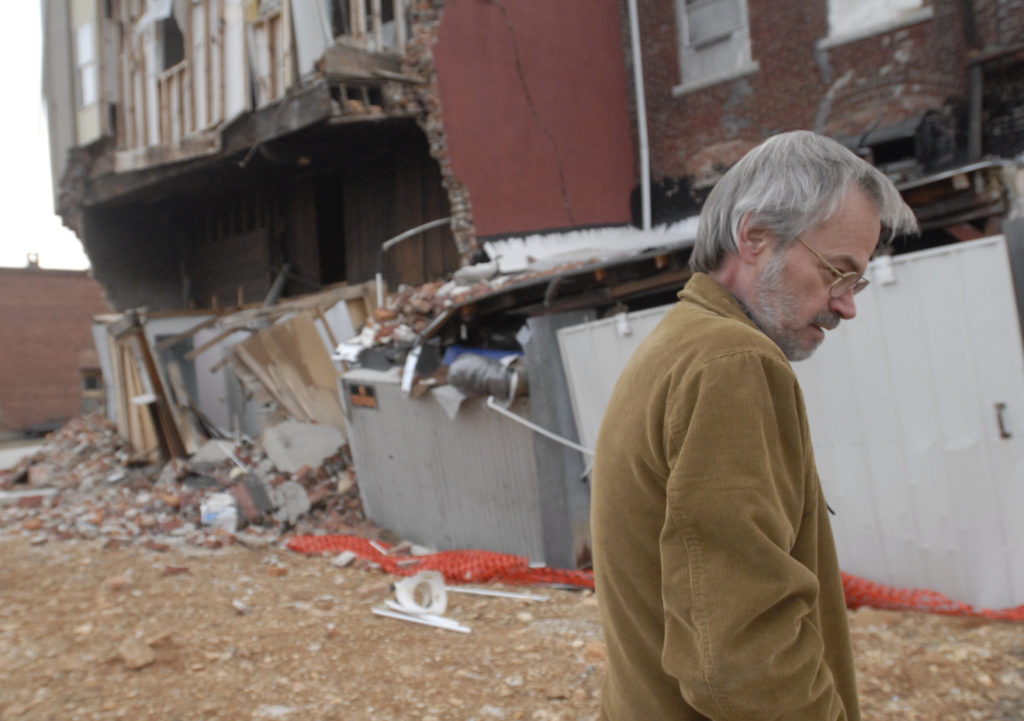 Mickey Morang and his mother lost their business and living quarters to a ground cave-in caused by undermining in Galena. Morang, who operated the downtown bar Green Parrot with his mother, has since moved to Baxter Springs, and he now works part-time running the lounge in the Galena Elks Lodge and takes care of his mother.

It’s been nearly a year since Mickey Morang and his 80-year-old mother lost their home and their business when part of an underground mine collapsed in downtown Galena.

A huge sinkhole developed, causing the back of the two-story brick building they lived in to collapse. It also heavily damaged the bar his mother owned and had just remodeled.

The sinkhole has been filled, but the remains of the two buildings are still standing. The property has been condemned by the city, and the city is going to work with Morang to take down the buildings this month, he said.

“They’ll take the cost of the demolition and add that to the property taxes,” Morang said.

But Morang says he can’t pay for the demolition, and the land has no value because it is condemned.

Galena, like the nearby town of Treece in Cherokee County, is undermined. But unlike Treece, the city of Galena is not seeking a federal buyout so residents can be relocated.

Instead, Galena is seeking a grant that will help pay for drilling to determine how much ground exists between the surface and the ceilings of the mines.

“That will allow them to map the voids so they’ll know where the biggest threat is,” said Jan Garton, a representative for U.S. Rep. Nancy Boyda, D-Kan., who is working with Galena and Treece on abandoned mine issues.

Galena has submitted a pre-application for a $500,000 matching grant from the Federal Economic Development Administration that will pay for the drilling, Garton said. The city would come up with $250,000, and the federal government would come up with the other half.

The city should know this week whether the pre-application is approved. If it is, the city can submit a full application, Garton said.

Morang and his mother moved to nearby Baxter Springs after the collapse of their buildings. He said he now works part-time running the lounge in the Galena Elks Lodge. He also takes care of his mother.