CityWatcher.com, a provider of surveillance equipment, attracted little notice itself – until a year ago, when two of its employees had glass-encapsulated microchips with miniature antennas embedded in their forearms. 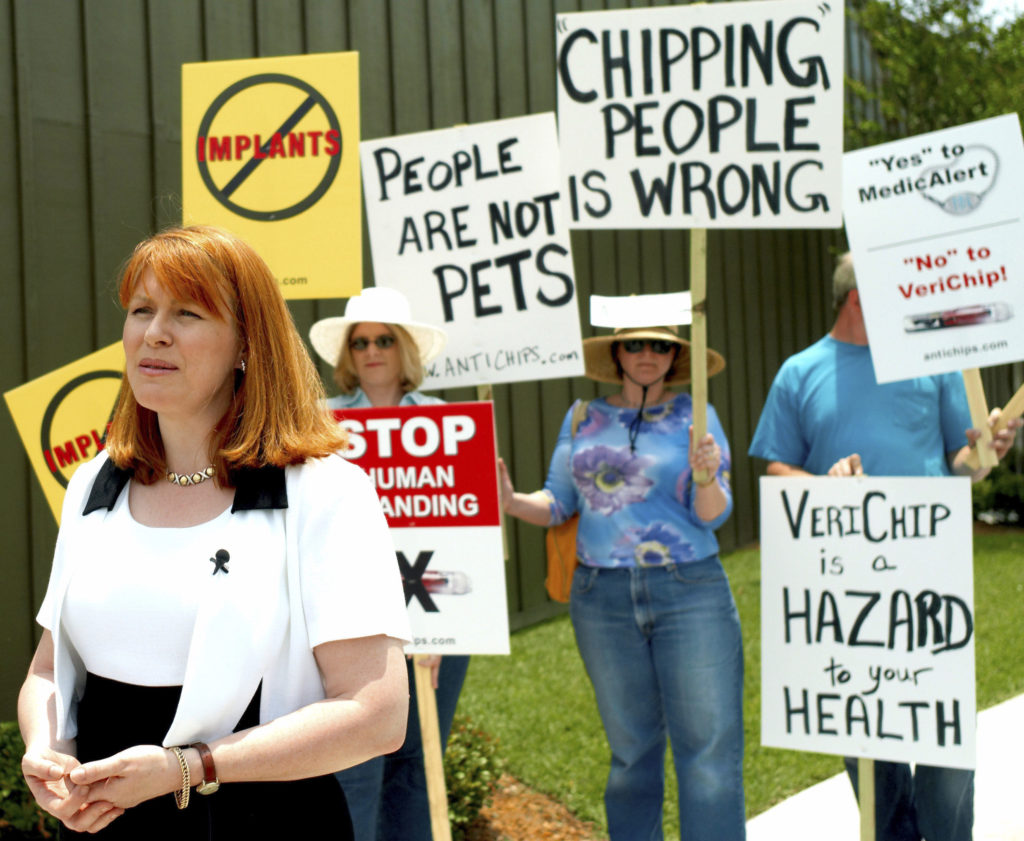 The “chipping” of two workers with RFIDs – radio frequency identification tags as long as two grains of rice, as thick as a toothpick – was merely a way of restricting access to vaults that held sensitive data and images for police departments, a layer of security beyond key cards and clearance codes, the company said.

“To protect high-end secure data, you use more sophisticated techniques,” Sean Darks, chief executive of the Cincinnati-based company, said. He compared chip implants to retina scans or fingerprinting. “There’s a reader outside the door; you walk up to the reader, put your arm under it, and it opens the door.”

But the news that Americans had, for the first time, been injected with electronic identifiers to perform their jobs fired up a debate over the proliferation of ever-more-precise tracking technologies and their ability to erode privacy in the digital age.

To some, the microchip was a wondrous invention – a high-tech helper that could increase security at nuclear plants and military bases, help authorities identify wandering Alzheimer’s patients, allow consumers to buy their groceries, literally, with the wave of a chipped hand.

To others, the notion of tagging people was Orwellian, a departure from centuries of history and tradition in which people had the right to go and do as they pleased without being tracked, unless they were harming someone else.

Chipping, these critics said, might start with Alzheimer’s patients or Army Rangers but would eventually be suggested for convicts, then parolees, then sex offenders, then illegal aliens – until one day, a majority of Americans, falling into one category or another, would find themselves electronically tagged.

Thirty years ago, the first electronic tags were fixed to the ears of cattle to permit ranchers to track a herd’s reproductive and eating habits. In the 1990s, millions of chips were implanted in livestock, fish, pets, even racehorses.

Microchips are now fixed to car windshields as toll-paying devices, on “contactless” payment cards (Chase’s “Blink,” or MasterCard’s “PayPass”). They’re embedded in Michelin tires, library books, passports and, unbeknownst to many consumers, on a host of individual items at Wal-Mart and Best Buy.

But CityWatcher.com employees weren’t appliances or pets: They were people, made scannable.

“It was scary that a government contractor that specialized in putting surveillance cameras on city streets was the first to incorporate this technology in the workplace,” says Liz McIntyre, co-author of “Spychips: How Major Corporations and Government Plan to Track Your Every Move with RFID.”

Darks, the CityWatcher.com executive, said his employees volunteered to be chipped. “You would think that we were going around putting chips in people by force,” he told a reporter, “and that’s not the case at all.”

Yet, within days of the company’s announcement, civil libertarians and Christian conservatives joined to excoriate the microchip’s implantation in people.

“Ultimately,” says Katherine Albrecht, a privacy advocate who specializes in consumer education and RFID technology, “the fear is that the government or your employer might someday say, ‘Take a chip or starve.”‘

Some critics saw the implants as the fulfillment of a biblical prophecy that describes an age of evil in which humans are forced to take the “Mark of the Beast” on their bodies to buy or sell anything. Others saw it as a big step toward the creation of a Big-Brother society.

“We’re really on the verge of creating a surveillance society in America, where every movement, every action – some would even claim, our very thoughts – will be tracked, monitored, recorded and correlated,” says Barry Steinhardt, director of the Technology and Liberty Program at the American Civil Liberties Union in Washington, D.C.

In design, the tag is simple: A medical-grade glass capsule holds a silicon computer chip, a copper antenna and a “capacitor” that transmits data stored on the chip when prompted by an electromagnetic reader.

Implantations are quick, relatively simple procedures. After a local anesthetic is administered, a large-gauge, hypodermic needle injects the chip under the skin on the back of the arm, midway between the elbow and the shoulder.

John Halamka, an emergency physician at Beth Israel Deaconess Medical Center in Boston got chipped two years ago, “so that if I was ever in an accident, and arrived unconscious or incoherent at an emergency ward, doctors could identify me and access my medical history quickly.” (A chipped person’s medical profile can be continuously updated, since the information is stored on a database accessed via the Internet.)

But it’s also clear to Halamka that there are consequences to having an implanted identifier. “My friends have commented to me that I’m ‘marked’ for life, that I’ve lost my anonymity. And to be honest, I think they’re right.”

Indeed, as microchip proponents and detractors readily agree, Americans’ mistrust of microchips and technologies like RFID runs deep. Many wonder:

¢ Do the current chips have global positioning transceivers that would allow the government to pinpoint a person’s exact location, 24-7? (No; the technology doesn’t yet exist.)

¢ But could a tech-savvy stalker rig scanners to video cameras and film somebody each time they entered or left the house? (Quite easily, though not cheaply. Currently, readers cost $300 and up.)

¢ What’s the average lifespan of a microchip? (About 10-15 years.) What if you get tired of it before then – can it be easily, painlessly removed? (Short answer: No.)

¢ How about thieves? Could they make their own readers, aim them at unsuspecting individuals, and surreptitiously pluck people’s IDs out of their arms? (Yes. There’s even a name for it – “spoofing.”)

The company that makes implantable microchips for humans, VeriChip Corp., of Delray Beach, Fla., concedes that’s a problem – even as it markets its radio tag and its portal scanner as imperatives for high-security buildings, such as nuclear power plants.

“To grab information from radio frequency products with a scanning device is not hard to do,” Scott Silverman, the company’s chief executive, says. However, “the chip itself only contains a unique, 16-digit identification number. The relevant information is stored on a database.”

VeriChip Corp., whose parent company has been selling radio tags for animals for more than a decade, has sold 7,000 microchips worldwide, of which about 2,000 have been implanted in humans.

In an emergency, hospital staff could wave a reader over a patient’s arm, get an ID number, and then, via the Internet, enter a company database and pull up the person’s identity and medical history.

To doctors, a “starter kit” – complete with 10 hypodermic syringes, 10 VeriChips and a reader – costs $1,400. To patients, a microchip implant means a $200, out-of-pocket expense to their physician. Presently, chip implants aren’t covered by insurance companies, Medicare or Medicaid.

For almost two years, the company has been offering hospitals free scanners, but acceptance has been limited. According to the company, 515 hospitals have pledged to take part in the VeriMed network, yet only 100 have actually been equipped and trained to use the system.

Some wonder why they should abandon noninvasive tags such as MedicAlert, a low-tech bracelet that warns paramedics if patients have serious allergies or a chronic medical condition.

“Having these things under your skin instead of in your back pocket – it’s just not clear to me why it’s worth the inconvenience,” said Jonathan Westhues, an independent security researcher in Cambridge, Mass.

Silverman responds that an implanted chip is “guaranteed to be with you. It’s not a medical arm bracelet that you can take off if you don’t like the way it looks.”

In fact, microchips can be removed from the body – but it’s not like removing a splinter.

The capsules can migrate around the body or bury themselves deep in the arm. When that happens, a sensor X-ray and monitors are needed to locate the chip, and a plastic surgeon must cut away scar tissue that forms around the chip.