Victoria Brett - For The Associated Press

Hadley, Mass. ? When Sandra Saravia goes to the movies, she finds it virtually impossible to pass the concession stand without giving in to the pricey, buttery allure of a bag of freshly popped corn.

“I love the butter. The flavory, greasy, messy taste of it,” said Saravia, a 12-year-old movie buff who realizes little if any butter likely is involved in the “buttery topping” taste she finds so tempting. “They put something in there – I don’t know what it is – but I can’t make it at home.”

Saravia is right. Without the help of commercial products, a home popper can’t replicate the “butter” (which really is partially hydrogenated soybean oil with butter flavoring), or the neon yellow salt seasoning (of which salt is just one component).

“There is so much chemistry involved,” said Wendy Boersema Rappel, spokeswoman for the American Popcorn Board. “With all the flavorings and oils they use, if you went into a lab you could make it. But it’s not a taste that you can duplicate or come close to replicating at home.”

Americans consume 17 billion quarts of popcorn a year. Much of that is eaten at home, and much of that is microwaved. But no matter what the packaging tells you, the microwave never will get you that taste and crunch that movie goers crave.

For that, some serious rethinking of ingredients and technique is needed.

Start with the kernels. Theaters generally use the American yellow or white kernel, though true popcorn connoisseurs will insist on white, believing it to be more flavorful, said Tracy Boever, spokeswoman for The American Pop Corn Co., which markets Jolly Time popcorn.

Storage is equally important. The key to successful popcorn is the roughly 13 percent moisture inside each kernel, which makes it explode under heat. Lose the moisture and you’ve got duds, or what the popcorn industry calls Old Maids.

This is why kernels should be stored in airtight containers. And never put kernels in the refrigerator, which can dry them out.

Good popcorn involves two types of fat: one for cooking, a second for topping. Popcorn experts say most theaters rely on coconut oil for the distinct flavor and aroma that draws people in.

Some theaters, under pressure to use an oil with less saturated fat, have switched to healthier canola oil. But coconut oil is widely available to consumers, so there’s no need to compromise at home. Jars of coconut oil (which is different than coconut milk or cream) can be found in most natural foods stores.

Coconut oil is solid at room temperature, but melts quickly in a warm pan.

On the stove in a heavy pot with a lid, or a hand-cranked stovetop popcorn popper, such as the Whirley Pop, is the only way. Other devices either don’t allow the ability to cook in oil (such as air poppers), or don’t allow enough control over the heat and movement of the kernels.

If using a pot, you must gently shake it back and forth constantly to keep the kernels in motion, which prevents burning. A hand-cranked popper, which has wands that turn the kernels, takes care of this.

The coconut oil is melted over low heat, but the heat is increased to medium once the corn kernels are added. 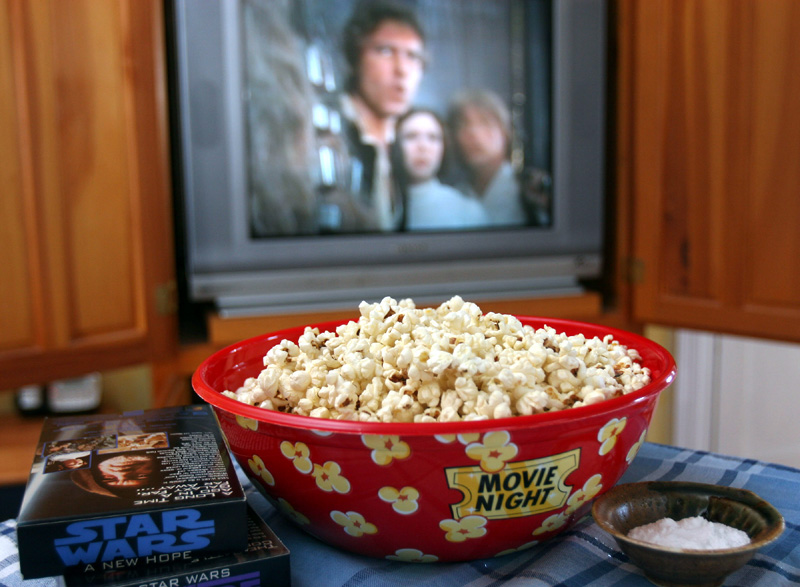 By using a few simple, but not typical, ingredients, the salty, buttery flavor of movie-style popcorn can be enjoyed at home.

Once popped, the corn also must cool for a minute before any seasonings are added, otherwise it can get soggy.

Movie theaters use a powdered yellow flavoring, such as Flavacol, which includes salt, yellow food coloring and artificial flavoring. You can safely skip the colorings and flavorings at home, but the type of salt used is key.

Ever notice that when you salt popcorn, you always end up with a pool of it at the bottom of the bowl? That’s because table salt is too big.

Movie theaters use powdered salt, which resembles all-purpose flour. This salt can be purchased, or easily made by running table salt through a blender, clean coffee grinder or mortar and pestle.

“It will stick and get stuck in the crevices, whereas regular table salt would bounce off,” said Robert Wolke, a former chemistry professor and author of “What Einstein Told His Cook.”

And never add the salt to the cooking pot with the kernels and cooking oil. Some people mistakenly think this will help spread the salt evenly over the popped kernels. But experts say this only succeeds in toughening the kernels.

Though jugs of the “buttery topping” can be purchased online, there’s a much easier way to get good butter flavor on your popcorn. It’s called clarified butter (or what in Indian cooking is known as ghee).

Clarified butter can be made at home by gently melting regular butter until it separates, then skimming the pure butter off the top (the water content sinks to the bottom), but it’s easier to purchase it. Jars, often labeled ghee, can be found in most natural and ethnic food stores.

It’s a simple recipe, but it produces phenomenal results. Of course, for those unwilling to make the popcorn from scratch, any number of companies online are happy to sell the not-so-secret ingredients in pre-measured packets.

Try UPop.com at http://www.upop.com/ or you can find products like Flavacol on Amazon.com and other Web sites.

In a heavy pot or stovetop popcorn popper, melt the coconut oil over low heat. Add the popcorn kernels and spread evenly over the bottom of the pot.

Cover the pot, leaving the lid slightly ajar, and increase heat to medium. Gently shake pan back and forth over heat until the kernels stop popping, about 3 to 4 minutes.

Uncover and let the popcorn sit for 1 minute.

Meanwhile, melt the butter in the microwave. This should take only a few seconds.

Transfer the popcorn to a large bowl. Drizzle the butter over it, then sprinkle with salt. Use two large spoons to gently toss the popcorn to coat evenly with butter and salt. Serve immediately.