Haskell Stadium a house of history 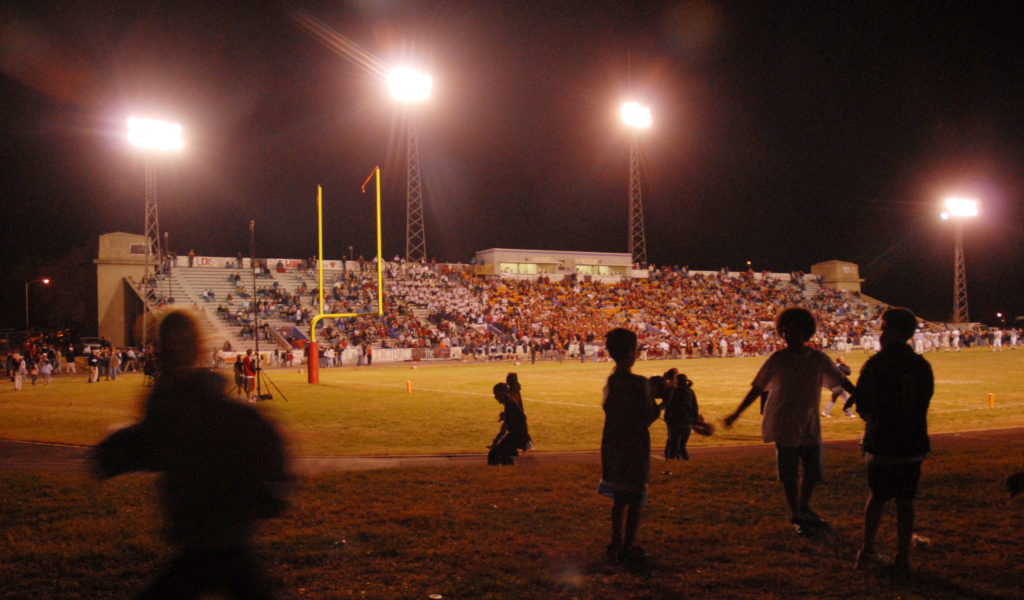 Children play a game of touch football as Lawrence High plays Free State at Haskell Stadium in this file photo.

It was then that Homeratha, now the interim athletics director at Haskell Indian Nations University, began to realize what the stadium meant to football in Lawrence.

“I don’t think anything could have been a lot bigger than the whole town of Lawrence showing up for a game,” Homeratha said. “To me, that was big.”

Even though Lawrence High’s playing days at Haskell date back to 1930 and Free State has only played there seven of the last 10 years, the two high schools – which now share the stadium – continue to add new memories to an already-rich history.

Ryder Werts, Free State senior, said it’s difficult to pinpoint just one thing about the venue that makes it special, but his favorite memories of playing at Haskell involve the pregame excitement before a Lawrence-Free State showdown.

Lawrence’s Skyler Countess compares Haskell to a small-college atmosphere, and, even as a senior, continues to feel nervous prior to kickoff.

“But once the band starts and you run through that banner, it’s great,” Countess said.

For all the warm feelings surrounding Haskell Stadium, there are some drawbacks associated with three teams sharing the same home field.

“That field cannot take three teams playing on it,” the 11th-year coach said. “About halfway through the season, it’s getting pretty thin and torn up.”

Free State attempted to rectify its problem by venturing into Kansas University’s more centrally located Memorial Stadium from 2003 to 2005. After playing in the 50,971-seat stadium, the Firebirds realized it wasn’t an ideal setting for high school football.

Werts said the KU stadium was too spacious and fans only filled the seats between the 40-yard lines.

In 2006, the problems facing Haskell Stadium and its occupants resurfaced when Free State returned.

With talk about the need for a district stadium continuing, what does the future hold for high school football at Haskell Stadium? Is a switch to artificial turf in the works?

“The question of turf has come and gone,” he said, “and it’s just not feasible right now. Our stadium is grass, and we’re probably going to stay like that.”

“Someone would have to really sell me to tell me there’s a better high school football stadium than Haskell,” said Wedd, who played there as a Lawrence High student. “There are people that want a district stadium, but what’s best for Lawrence High is Haskell Stadium.”

Lisher reiterated that Haskell was a perfect fit for Lawrence High, but said Free State deserves something similar.

“It would be nice someday if that could happen,” said Lisher, noting it would take some good fortune and a plan of attack not requiring raised taxes.

As it stands, both Lawrence and Free State will continue to share gridiron duties at Haskell for the time being, allowing a new batch of Lions and Firebirds to bear witness to memorable plays like Hadl’s long touchdown run.

“I think most kids that have come up in Lawrence have seen their heroes play at Haskell,” Homeratha said. “I think like any kid, it would be an athlete’s dream (to play there). Maybe they don’t think about it, but it’s synonymous – Haskell Stadium is their stadium.”