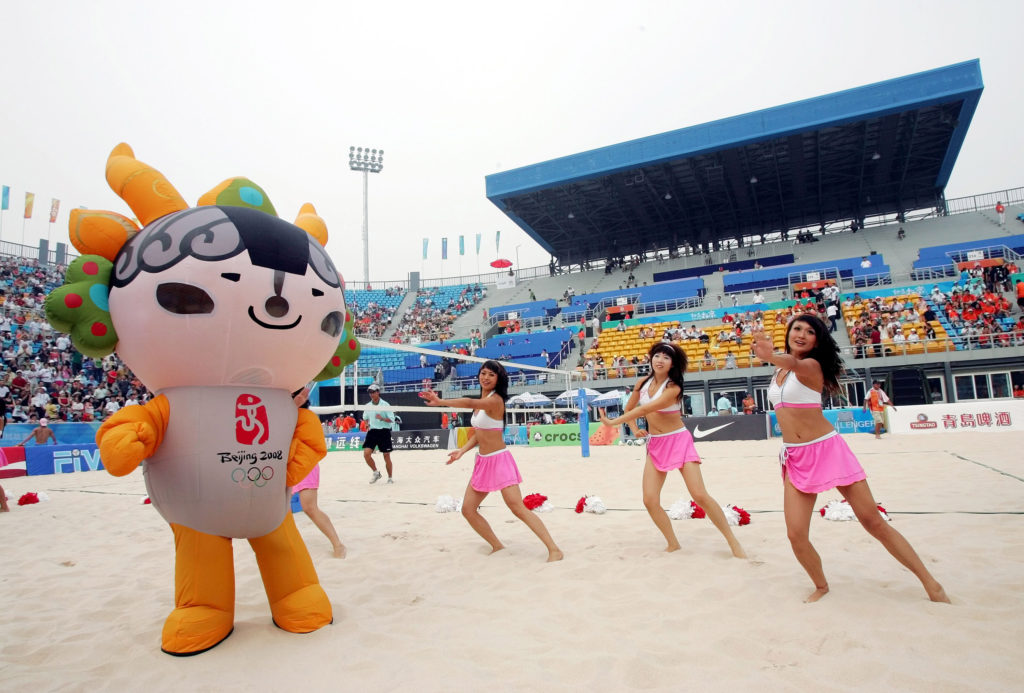 The 2008 Olympics mascot dances with cheerleaders between matches at Sunday's FIVP Beach Volleyball Women's Challenger in Beijing. China hopes its regimented training schools will give it an edge in next summer's medal race with the United States. 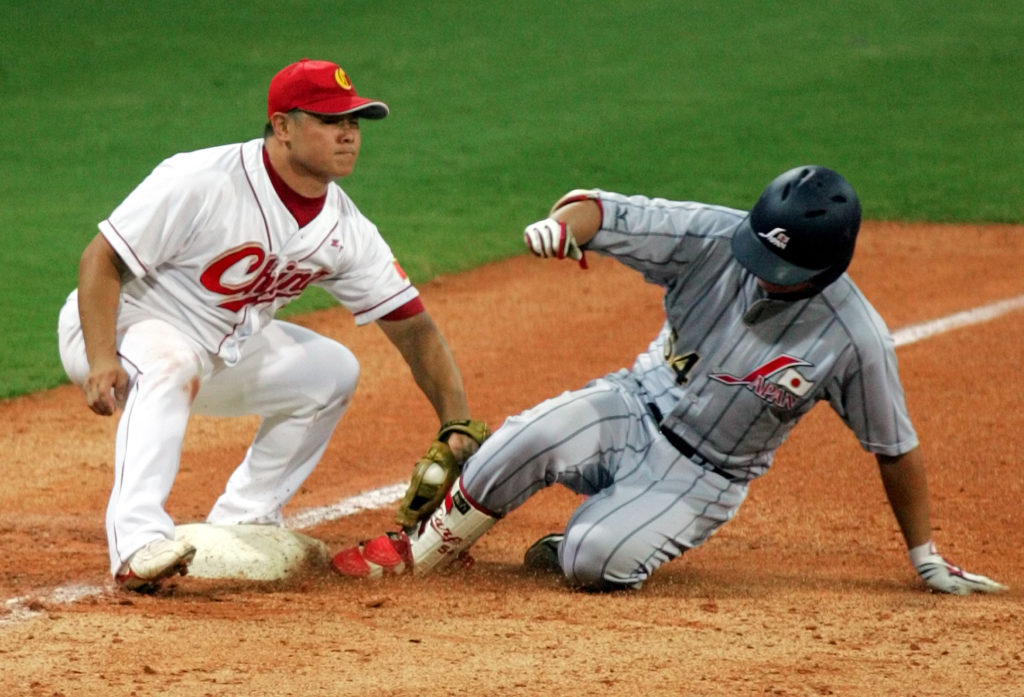 Beijing ? With a nation’s yearnings for international greatness weighing on their small bodies, the young gymnasts stoically work through daily routines of bending in formation, bouncing along balance beams and twirling on the high and medium bars.

In the table-tennis hall, children attack each other across 30 pingpong tables for hours. And in yet another gym, young tae kwon do masters go through their martial arts moves.

This is not child’s play, but a typical afternoon at the Beijing Shichahai Sports School, one of China’s premier athlete training facilities. The children, many of whom live at the school, represent China’s push to become an Olympic superpower.

The Chinese training style, which leaves little time for academic study, has paid off in recent years. During the 2004 Olympics in Athens, China was second in the gold-medal count with 32, just four fewer than the United States. And expectations are high here that China, with a home-field advantage, will do even better next year during the Beijing Olympics.

But a new path to glory – this one education – now is available to the growing middle class, challenging the country’s rigid approach to Olympic gold.

The latest crop of champions-in-training strains under the giant red Communist flag of China in the more than 300 elite sports schools dotting the country. Meanwhile, coaches, academics and parents are debating the merits of a system that can greatly limit the futures of young people who fail to achieve sporting success.

Unlike the United States, where amateur athletes can compete while attending college, young Chinese have had to decide between education and athletics. But with a middle class estimated at 200 million, parents increasingly are choosing classrooms over volleyball courts.

“We do not think sports is the only way to change the lives of children,” said Huang Yaling, director of the Olympic Research Center at the Beijing Sport University. “We now think about education.”

Huang does not have exact statistics, but he said the number of middle-class children pursuing sports was decreasing.

Before China became a land of opportunity with double-digit economic growth for its 1.3 billion citizens, “parents were very happy to send their children to these sports schools,” Huang said. They at least offered a shot at prosperity.

Gymnast Weng Jing, who began her sports career at 4, was a student at the Beijing sports school before becoming a national champion with the Beijing provincial team. An injury kept her from competing at the Atlanta Olympics in 1996, she said.

“Athletes on the national team, they only think about getting a medal,” said Weng, now a 25-year-old sports editor for Web portal Sohu.com. “They don’t worry about other things in their lives because the government will arrange for their food, their apartments.”

Weng said that while competing at 9, she earned about 30 percent more than her parents.

In the United States, prospective athletes receive no funding or training from the government. Olympic athletes, though, receive support from the U.S. Olympic Committee, as well as from corporate sponsorships and appearance fees.

In China, “the government puts the resources behind the athletes. They take care of you,” said Jiang Yi, a writer for Sports Illustrated China.

Chinese media, though, have chronicled cases of athletes who train all their young lives but fail to win national recognition because they don’t win top medals or compete in popular sports such as basketball, pingpong and badminton. They end up struggling to make ends meet.

“They have no job skills,” said Beijing Sport University professor Huang. “The government can’t force officers of companies to accept these athletes as employees.”

‘She lives a poor life’

In one case, a former national weightlifting champion worked in a bathhouse until media attention pressured the government to help her set up a laundry business. In another, a former marathon runner threatened to sell her medals after accusing her coach of failing to meet commitments to pay her a salary.

“She lives a poor life,” said Yu Fen, who retired as China’s national diving coach after the Atlanta Olympics.

To address the problem of uneducated athletes, Yu started a diving program at the prestigious Tsinghua University modeled after the U.S. system, in which young people both train and attend university classes. In 2005, she successfully sued the national sports administration to allow her students to compete in provincial and national competitions.

Now she expects some of her students to compete at next year’s Olympics. Nonetheless, they still face roadblocks at certain competitions, as well as pressure to abandon studies to “train, train, train,” Yu said.

That fierce competitive spirit is felt at Beijing Shichahai Sports School, which calls itself “the cradle of world champions.” The school demands a high level of devotion from its 560 trainees.

The Shichahai school, an elegant campus along the west bank of the Shichahai River, has an alumni list that includes national and Olympics athletes, and even international film star Jet Li. Students spend the mornings studying academics, then train every afternoon. During the summer months, training in gymnastics, pingpong, boxing, tae kwon do, badminton and volleyball takes up the entire day.

Nine-year-old pingpong player Yu Xi left his family in Heilongjiang Province a few months ago to attend the school. He said he expects to visit his family only three times a year during breaks from school and training. During summer months, he trains as many as nine hours a day.

“I dream to be a champion,” said Yu, briefly leaving the pingpong table one recent afternoon.

“I like pingpong. I enjoy training here,” said Yu, though he conceded missing his family.

Mike Filla, a St. Louis gymnastics coach who recently visited the school with a group of U.S. high school athletes, was impressed with the discipline.

“It’s a lot like the U.S., only more intense and focused,” he said. “They train a lot harder. They train all day.”

Coaches at times push their students hard, even hitting them when they don’t meet standards, according to news reports. But Liuhong Bin, director of Shichahai’s training department, denied students were abused. He conceded that coaches “physically help” the students reach for the highest levels, but he said they don’t hurt them “badly.”

“Everyone who comes here has to wish to win the Olympic gold medal,” Liuhong said. “They must dream to be the best players in the world. Everyone has pressure. If you want to be a good athlete, you should bear the pressure.”

Once the pressure of the 2008 Olympics passes, she believes the nation will more fully re-evaluate how its young athletes are trained. For now, Yu said, “The government and the other coaches, they want to win so much.”