It didn’t take long for Daniel Pennington to fall in love with the contra-dancing events put on monthly by the Lawrence Barn Dancing Assn.

“A friend of mine had been dancing with the LBDA for a couple of years and kept bugging me to come out and give it a try,” says Pennington, a Lawrence resident.

“I pretty much got hooked on day one.”

That first experience was in 1994, and the charm still hasn’t worn off.

In fact, he eventually met his wife, Jane Pennington, at a contra dance about seven years ago – although not one sponsored by the LBDA.

“At our wedding, we celebrated with a contra-dance reception,” he says.

For Pennington, the best part of the Lawrence dances is the live music, performed by local string bands, featured at every event.

And it’s an entertaining way to stay in shape.

But what exactly is contra dancing, the variety of dance performed by enthusiasts at the events his group sponsors?

“I’ve been doing it for 12 years, and I still have trouble describing it. It’s traditional folk dancing, and its history dates back several hundred years in America, with roots in England and Ireland,” he says. 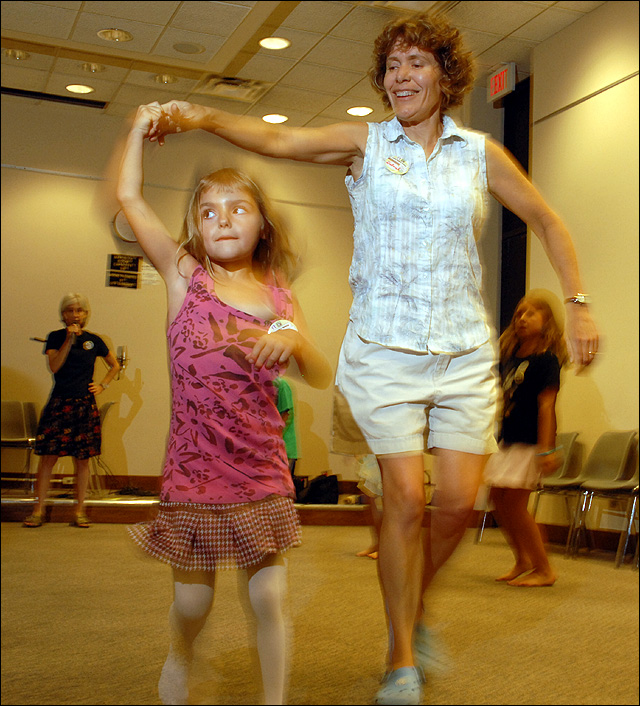 Tori Goldman, left, performs a turn with the assistance of Deborah Altus at the 10th anniversary celebration of the Lawrence Barn Dance Assn. The event was Aug. 26 at the Lawrence Public Library, 707 Vt.

“There’s always a caller (as in square dancing) and live music. In the beginning, there’s men in one line and women in another, facing each other. You and your partner stay together, and you work your way down the line and dance with everybody else as well.”

It’s a fairly easy form of dance to pick up, Pennington says, and the LBDA offers beginner’s lessons before each monthly dance.

All that newcomers to the events need to do is wear comfortable clothing and soft-soled shoes, and just show up.

The LBDA – founded 24 years ago by a small group of dance enthusiasts led by then-Kansas University student Catherine Baer – organizes contra dances, workshops and special events in the Lawrence area.

Its goal is to promote community through dance and music, according to the group’s Web site, www.lawrencebarndance.org.

About the Lawrence Barn Dance Assn.

The Lawrence Barn Dancing Assn. is open to anyone in the area who is interested in contra dancing and enjoys old-time, New England-style live music performed by string bands.

The group sponsors family dances from 4 p.m. to 6 p.m. on the first Saturday of each month at the Lawrence Public Library, 707 Vt., for dancers of all ages and abilities. (No cost to attend.)

In months that have a fifth Saturday, the LBDA offers a “Bloo Moon Dance” from 7:30 p.m. to 10:30 p.m. at Woodlawn School. This event is for more advanced dancers. The next Bloo Moon Dance is Sept. 30.

The LBDA will sponsor its 12th annual Pilgrim’s Progression Dance Weekend Nov. 17-19, featuring the music of Nightingale and the calling of Steve Zakon-Anderson.

To learn more about the LBDA, visit its Web site at www.lawrencebarndance.org.

Regular dances start at 7:30 p.m. on the third Saturday of each month in the gymnasium at Woodlawn School, 508 Elm St. Beginner’s lessons are offered at 6:45 p.m.

The cost to attend the regular dances is $7 for adults, $3 for students (with student IDs) and $2 for children under 16.

When a month has a fifth Saturday, the group adds a “Bloo Moon Dance” for more experienced dancers only.

The group also offers Family Dances from 4 p.m. to 6 p.m. the first Saturday of each month at the Lawrence Public Library, 707 Vt. These events feature easy-to-learn traditional dances for all ages and abilities, followed by a quick potluck. There’s no cost to attend, but donations are accepted to help pay the musicians.

The LBDA Family Dance celebrated its 10th anniversary Aug. 26 with dancing, pizza and prizes at the library.

Jill Allen, one of the group’s board members, believes it’s important that the LBDA continue to offer the Family Dance to the community.

“I think that if this kind of dancing represents our tradition and heritage, then we need to be passing it on to our children. Many of the dances we do are modern adaptations to make it more fun,” she says.

Allen, who has been going to LBDA events for about 20 years, says the dances attract a wide range of people. Even teenagers enjoy participating. 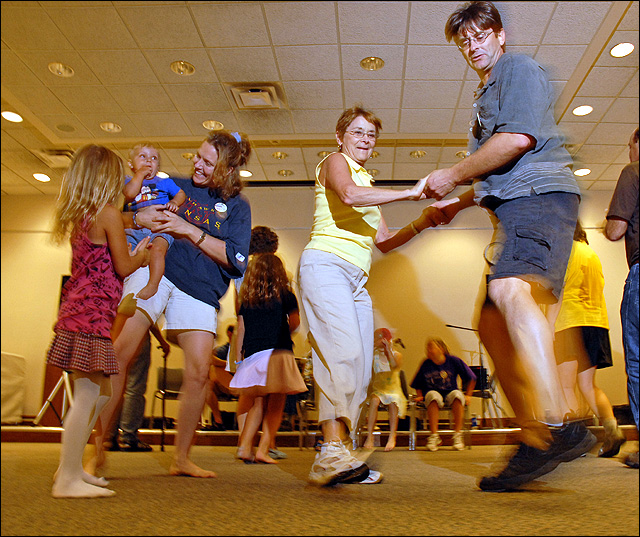 Carla Mumma and Jerry Jost, right, dance down the line of people at the 10th anniversary of the Lawrence Barn Dance Assn. The event was Aug. 26 at the Lawrence Public Library, 707 Vt.

“Everything is taught, it’s all explained, we have beginner’s classes before every dance, and we start the evening out with simpler dances,” she says.

Allen met her husband, Greg Allen, at an LBDA event 15 years ago.

“He’s a fiddler. He was playing music with the band, and that’s how I met him. A lot of people meet (their spouses) at a dance, quite a few,” she says.

The Allens even formed a band, Fox on the Run, with Greg on fiddle and Jill playing piano.

Bayliss Harsh, a Lawrence resident, is one of the founders of the LBDA and served as a board member for its first four years. The group’s first official dance was in October 1982.

And her husband, Doug DuBois, was one of the musicians at that first dance.

The group emerged as a result of a grass-roots effort, led by members of the KU Folk Dancing Club, Harsh says. Catherine Baer, a KU student who came to Lawrence from Chicago, provided the first spark of interest.

“The Lawrence Barn Dance Assn. has made a lot of things happen in town, brought a lot of great music events here,” she says.

“I love it. It’s just so much fun to move to upbeat, festive music with other people. When the music and the dancing get going, it is a fabulous thing.”

Like Harsh, Carl Graves was among the Lawrence residents present at the group’s founding in 1982. He serves as an LBDA board member.

“I don’t dance as much as I used to, but I’m able to do a few numbers at each of our regular dances,” he says.

He remains a fan of the activity.

“When you look on the dance floor, people are smiling. It’s enjoyable, it’s good exercise, and it’s wonderful socializing,” he says, noting that it’s an alcohol- and smoke-free environment.