Toplikar: Tips to reduce risk of infection at work, home

The reactions Julie was getting seemed contagious: first sympathy, then fear.

After my daughter was diagnosed earlier this month with the mumps at Kansas University’s Watkins Student Health Center, she was told she needed to move out of KU’s Ellsworth Hall.

Julie, one of the 173 diagnosed cases at KU, insisted on going back to her dorm room with me to get her computer, books and clothes.

So she wore a surgical mask and carried a bottle of disinfectant for her hands.

Another student who lived on Julie’s wing quickly pulled her T-shirt collar up to cover her nose and mouth and ducked behind her dorm room door.

“I’m sorry, but I can’t afford to get sick during finals week,” she said, peering out.

Their reactions made me wonder if I had done enough to protect myself at home or work.

After all, you don’t always know you have the virus right away. Mumps, an infection of the salivary glands, is contagious from about seven days before swelling sets in to nine days after. 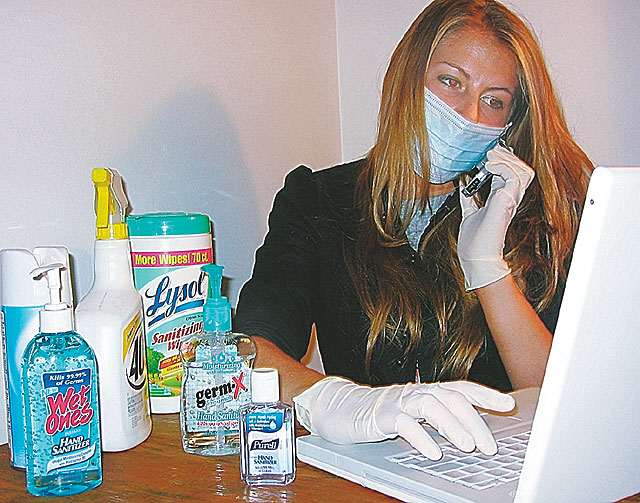 “If you haven’t had both of your MMRs, get the second one,” Tirol-Goodwin said.

After that, it’s just a matter of practicing healthy habits, she said.

The virus spreads through airborne microscopic water droplets in saliva or breath.

It’s best to avoid sharing food and drinks. It’s also wise to cover your mouth when coughing or sneezing and to avoid touching others.

“We’ve told people who have the mumps to really isolate themselves,” Tirol-Goodwin said.

If you have the mumps, she said it helps to wear a common surgical mask around others.

More about health and safety

I wondered about getting goggles, a face shield or a mask that screens out nanoparticles for use at our home.

However, National Institute for Occupational Safety and Health-approved N-95 respirator masks, which filter 95 percent of particulate matter, aren’t needed for mumps, according to the federal Centers for Disease Control.

“Properly worn procedure or surgical masks are sufficient,” according to the CDC.

Many of us work in offices where we share a desk or use the same computer, telephone or other office equipment.

Tirol-Goodwin recommends washing your hands frequently with soap and water to cut on the threat of exposure around the office.

However, you also can protect yourself by using hand sanitizers, she said.

The Food and Drug Administration recommends hand sanitizers that have a concentration of 60 percent to 95 percent ethanol or isopronal alcohol.

I’ve found a couple of brands, including Purell, Germ-X and Wet Ones, that claim to kill 99.9 percent of germs.

“What are you doing?” my wife asked when she saw I was about to spray my computer with a Lysol aerosol disinfectant.

She was right. Disinfectant wipes were probably the best way to go to avoid hurting the electronics.

I found a study that was just published by Dr. Bill Rutala, a University of North Carolina professor of medicine, in the journal Infection Control and Hospital Epidemiology about the effectiveness of using disinfectant wipes to clean keyboards.

Rutala and his research team tested seven types of wipes on three types of bacteria found on hospital computers. All of the wipes removed or inactivated at least 95 percent to 100 percent of the bacteria.

And they didn’t hurt the keyboard appearance, cause the letters to fade or affect the way the computers functioned, the researchers found.

However, Rutala recommends using a disinfectant wipe to clean a keyboard if you’re sharing it with someone else to prevent the spread of infection during cold and flu season.

I did a double-take when Bonnie, Julie’s twin sister, walked in the door a week ago.

Bonnie was not only wearing a mask but also surgical gloves.

“Isn’t that a little overkill?” I said, laughing.

But Bonnie was serious about protecting herself. She had just returned for the summer from the University of Iowa, which had a bigger mumps outbreak than KU.

“Julie, stay over there,” she said sternly. It was a strange Mother’s Day, with both of the twins masked up.

But there has been a bright side to our family’s episode with the mumps: There hasn’t been any arguing about sharing clothes for the last nine days.

With the COVID-19 pandemic showing no signs of subsiding, it may not be realistic for universities to reopen this ...

Opinion: Public schools are at heart of citizenship

July 4 marks our nation’s independence celebration and reminds us of our founding principles. It’s a ...

Opinion: A place for moderate Republicans?

The 2020 elections for the Kansas Legislature could be perilous for moderate Republicans. Their political relevance ...

It’s been around 100 days since the COVID-19 pandemic officially arrived in Kansas, bringing fears both physical ...

Opinion: Government by Nobody has got to go

What do COVID-19 deniers and protesters of police brutality have in common? The first group tends to be older, ...